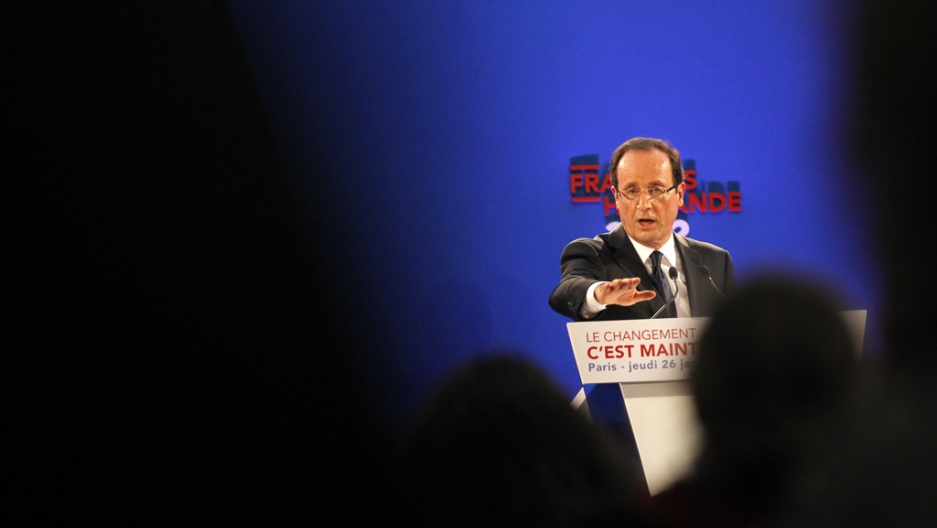 BRUSSELS, Belgium – The man best placed to unseat Nicolas Sarkozy in France’s presidential elections this spring laid out his plan of attack Thursday, pledging to tax bankers, big business and the rich in order to plow money into education and job-creation projects.

“In France we have a moral crisis provoked by the deepening of inequality between the very rich and the rest of the country,” said the Socialist candidate Francois Hollande as he announced his 60 point manifesto in Paris. “The rich have to contribute to the national effort.”

Opinion polls currently put Hollande around 10 points ahead of Sarkozy. The presidential vote will be held on April 22, and is likely to be followed by a second-round run off between the two most popular candidates on May 6.

In his manifesto speech, Hollande sought to capitalize on Sarkozy’s weak spot: France’s economy, which lost its cherished AAA status from the Standard & Poor’s ratings agency this month, amid concerns over high debt and low growth.

Hollande pledged to cut the debt from 88.7 percent of economic output this year to 80.2 percent during his five year term, while getting the current stagnant growth up to at least 2 percent by 2014.

The 57-year-old candidate has seen his popularity rise despite being initially dismissed as a grey, uninspiring figure, who was only selected as the Socialist Party candidate after the favorite Dominique Strauss-Kahn was brought down by a sex scandal in a New York hotel.

Hollande’s personal life is not regarded as colorful. However, he maintained a relationship for over 20 years and had four children with the previous Socialist presidential candidate, Segolene Royal. They broke up a month after she was defeated by Sarkozy in 2007, and Hollande now dates TV journalist Valerie Trierweiler.