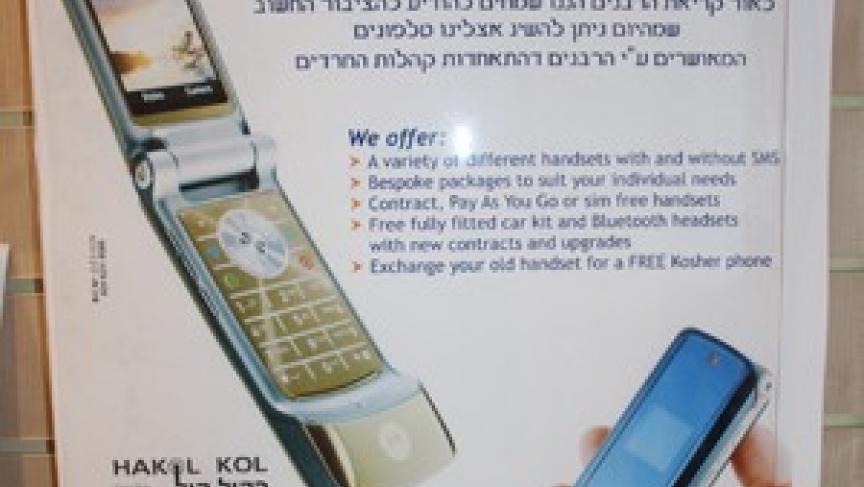 The British Rabbinate is now offering kosher certification to cell phones it supports for members of the Ultra-Orthodox community.

Friday afternoon can be a stressful time in Stamford Hill, a working class neighborhood in northern London.

The ultra orthodox Jews, are in a rush to buy challah, rugalach and other Jewish baked goods so they can take it easy after sunset, when the Sabbath starts. Resting on the Sabbath is part of an effort to live as closely as possible to Jewish law.

But despite the community’s traditional ways, the members aren't opposed to new things.

“Anything that can be used to enhance Judaism is welcomed,” said Rabbi Chanoch Kesselman. “But like so many things there are uses and abuses."

Rabbi Chanoch Kesselman represents the British rabbinate, the main Jewish authority in Britain. Kesselman said the Internet, for example, offers access to valuable religious texts and discussions. But the rabbi said it can also lead to immodesty. He said in the same way, cell phones can help people do business or help parents keep track of their children. But they also can lead children astray.

“The rabbinate was very concerned that cell phones with texting facility should not be used by youngsters,” said Kesselman.

Texting is not only a waste of time, the authorities decided, but it also encourages “immodest” exchanges that would not happen on the telephone or face-to-face. So the rabbinate decided to grant certain cell phones official approval, calling them kosher — a system that has been most well-known for its use in food. The kosher phones are stripped down devices that can only receive and make calls. It helps the community feel more comfortable about choosing a phone, he said, much like shopping for kosher food.

“Using a phone with a similar seal on is similar to buying any article that is certified as kosher,” Kesselman said.

The pace of passersby becomes more hectic as the Sabbath approaches. Menachem Weinstein is smoking a cigarette outside a synagogue. Before rushing off, he said not all Ultra-Orthodox agree on the need for kosher cell phones.

“I think in this day and age they should be more focusing on, not disallowing stuff, but finding out why the teenagers, because that’s why they made the kosher phone, why the teenagers are abusing it,” Weinstein said

Shortly afterwards speakers blasted out music, telling the neighborhood that the Sabbath was about to start.

At Rose Communications, the company which sells the phones, Maxi Rose said there are only about 20,000 to 30,000 Ultra-Orthodox families in the U.K., not enough to make it practical for a cellular network to offer Kosher phone service.

“So no network would come really and make those changes,” Rose said. “So the changes had to made from the hardware and software in the device, rather than from network level. So the devices are modified. No cameras allowed, no SMS allowed, no Internet allowed.”

Rose says the phones have been a big hit. Not just to protect children, but among adults who prefer the simplicity. He said there’s also been a kind of crossover appeal. Most of his online sales are to non-Jewish customers around the world, in places like Saudi Arabia.

Kesselmen said British Muslims tell him they too are concerned about the decline in moral standards among Muslim youth. Just as halal or Islamic dietary laws are very similar to kosher, the rabbi said Muslims and other non-Jews have no problem following the lead of “kosher” phones.