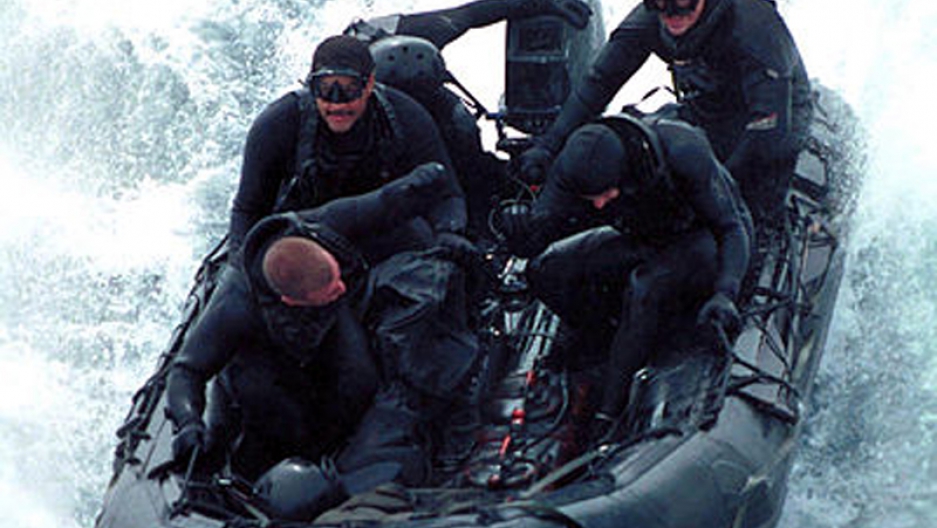 Navy SEALs are trained to reach their target by sea, are or land, as shown in this training photo from 2000. On Wednesday, SEALs used a helicopter to conduct a hostage recuse operation in Somalia.(Photo by the U.S. Navy's John Sullivan, via Wikimedia

They shot and killed pirates on a small boat a great distance away, in order to rescue hostages. And on Wednesday, the team, more properly known as the U.S. Naval Special Warfare Development Group, added to its legend by swooping in on a Somali pirate den and rescuing two hostages, an American and a Dane. In the process, they killed nine pirates without losing the life of a single SEAL or hostage.

Ryan Zinke, a Montana state senator and former member of SEAL Team Six, said these sort of raids may be the future of the American military around the world.

"The idea is to make pirates, Al Qaeda, anybody operating in the lawless territory of Somalia, feel like there is no safe territory," Zinke said. "Even if you're on land, you're not necessarily safe."

Zinke said he thinks these sorts of operations are perfect for the SEALs and will become more important, though he's not so excited about an individual team being identified as being behind the operation.

"I think U.S. special operations is the right term to use," Zinke said.

The operation, which came immediately after President Barack Obama heaped praise on the military during the State of the Union address, has presented a modest benefit to Obama's standing.

Zinke, a Republican, said the political nature of the announcement, by the White House, made him uneasy.

"The military is not political. When I was a commander, it didn't matter whether I was a Republican or Democrat. It was about the mission," Zinke said. "But we live in a different world...the media, the speed of the media and the availability of technology online, is a game changer. The amount of information that's available out there either by the military itself or other means, is pretty different water than what we've been in before."