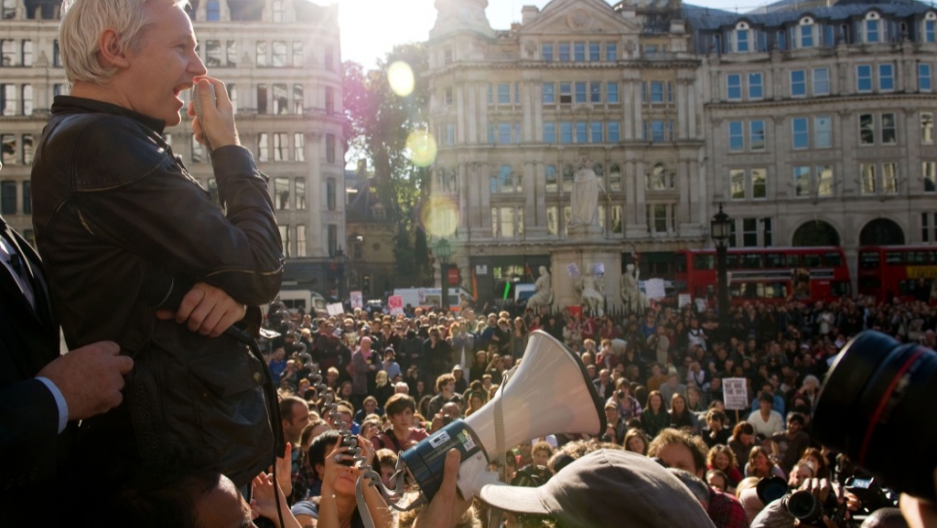 Wikileaks founder Julian Assange speaks to demonstrators from the steps of Saint Paul's Cathedral in central London on Oct. 15, 2011. Around 800 people rallied in London's financial heart amid a heavy police presence as part of world protests against corporate greed and budget cutbacks. Inspired by the Occupy Wall Street movement and Spain's 'Indignants', people began taking to the streets across the world, targeting 951 cities in 82 countries.
Credit: Leon Neal
Share

More from GlobalPost: WikiLeaks play set to open in London

“Through this series I will explore the possibilities for our future in conversations with those who are shaping it,” Julian Assange said. “Are we heading towards utopia, or dystopia, and how we can set our paths?”

Russia Today advertised the new tie-up prominently on its website.

Press freedom campaigners were baffled by Assange’s decision to work with the channel, which is run by Ria Novosti, the Russian government news agency.

Johann Bihr, who monitors Russia for Reporters without Borders, said:
“This is a media organization which is spreading the word of the Kremlin.
I can understand how Russia Today would like to use him, but I’m not quite sure that he will fulfill their expectations. I doubt that he’s a person who can shut his mouth if he’s ordered to do so.”

Assange is currently under house arrest in the UK, where he is fighting extradition to Sweden to face allegations of sexual assault.

His appeal will be heard in Britain’s Supreme Court in February.

More from GlobalPost: Fake rock used by Britain to spy on Russia for years