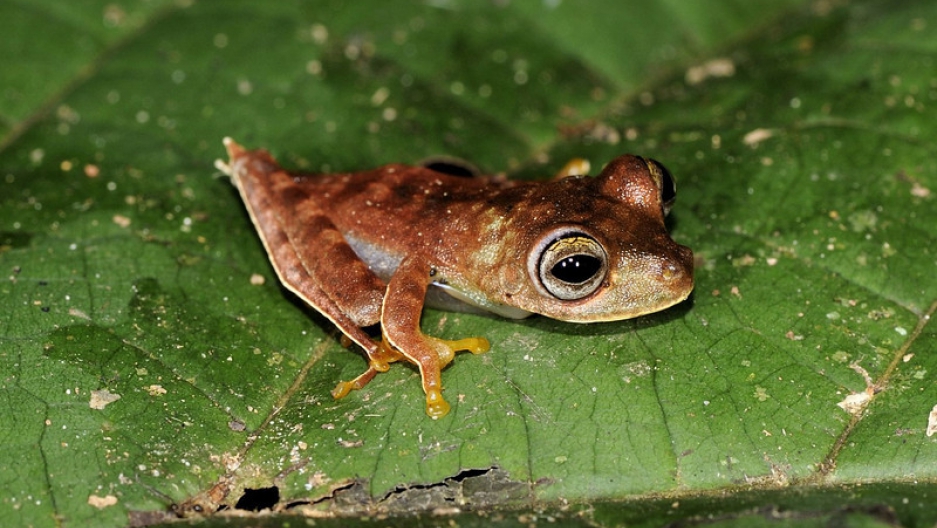 This possibly new species of frog has been nicknamed the "cowboy," because of its white fringed legs and "spur."
Credit: © Paul Ouboter/Conservation International
Share

A "cowboy frog," armored catfish and "Crayola cricket" are just some of more than 40 new species discovered in the remote forests of Suriname.

During a three-week expedition to the small South American county, Conservation International (CI) recorded a total of 1,300 plant and animal species, including 46 believed to be new to science and 14 on the IUCN Red List of endangered species.

Among the weirder finds were the so-called "cowboy frog," named for the white fringes along it legs and a spur on its "heel," and a catfish covered in armored plates with sharp spines, which it uses to defend itself from predatory piranhas.

And a brightly colored cricket, or katydid, has been nicknamed the "Crayola katydid" for the vibrant yellow, blue and pink shades of its body and wings.

Scientists also observed animals that are known to science but very rare, such as a frog called "Pac-Man," whose huge, trap-like mouth allows it to swallow prey almost as large as its own body.

The area the expedition explored, along the Kutari and Sipaliwini Rivers near the village of Kwamalasumutu, is one of the world's few remaining wildernesses, Conservation International scientist Trond Larsen told the BBC.

"As you fly into the area, you travel for hundreds of miles and often [don't] see a single road – just continuous forest. [...]

"We take these wildernesses for granted. But unless we focus on them now, they won't be like that for long."

The purpose of the expedition, which forms part of the charity's Rapid Assessment Program, was to document the region's biodiversity for future study and help establish it as a cultural heritage site and ecotourism destination, CI said. It was carried out in cooperation with local students, conservation services and indigenous people.

The charity plans to lead a second expedition to southern Suriname in March.

You can learn more about the team's discoveries, and vote for your favorite, on Conservation International's website.

Here the scientists discuss their findings: