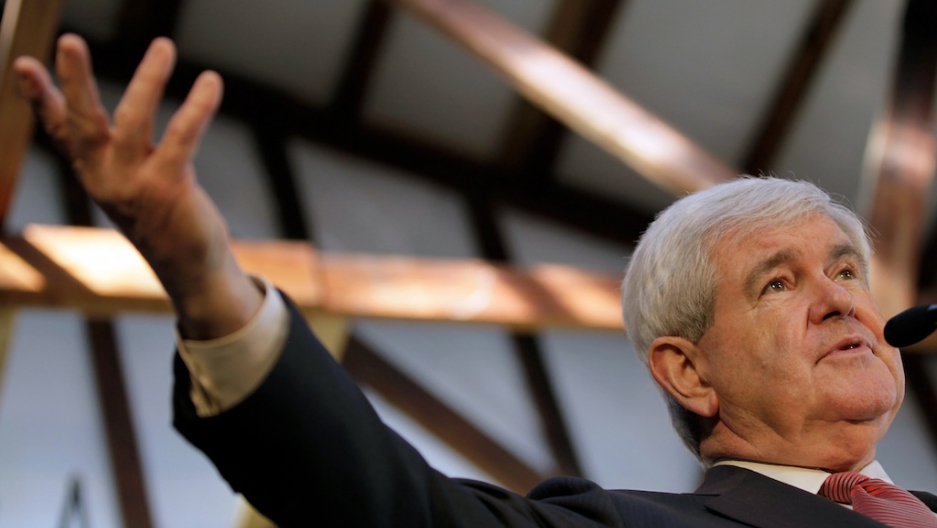 WALTERBORO, SC - JANUARY 19: Republican presidential candidate and former Speaker of the House Newt Gingrich speaks during a campaign stop at the Low Country Sportsmen BBQ for Newt event on January 19, 2012 in Walterboro, South Carolina. Newt received an endorsement from Texas Governor Rick Perry who dropped out of the race for the Republican nomination for President. (Photo by Joe Raedle/Getty Images)
Credit: Joe Raedle
Share

COLUMBIA, S.C. — I stood at the voting machine with a friend of mine watching his hand hesitate over the keys.

“I never thought a day would come when I would do this,” he said. Let’s call him Frank; I cannot reveal his name; he has a family to support in South Carolina.

Frank’s face tightened, and he pressed the screen next to his choice: Newt Gingrich.

“Hell has officially frozen over,” he said, walking out of the polling station.

Frank was part of a determined band of Democrats who went out on Saturday to try and derail the Republican primary.

More from GlobalPost: Can Mitt Romney pass the duck test?

I had first become aware of this practice, which is not entirely uncommon in US elections, the previous day, at a luncheon arranged by another friend. These women were all in their sixties, friendly and polite, and not at all eager to talk about politics in front of each other. These names, too, have been changed, since in some parts of South Carolina what they are saying would be tantamount to treason.

“I don’t really like any of the candidates,” said Rose, as we discussed the Republican presidential debate in Charleston. “I had to stop watching after awhile.”

“But are you going to vote on Saturday?” I pressed.

“Well …” she looked around at her friends. This was obviously not a topic they brought up often between themselves. “I thought I’d vote, even though I’m …” her voice lowered still further, “not a Republican.”

At that everyone relaxed. There are a lot of Democrats in South Carolina, but they seem to be underground. This group, which had been meeting for years, had no idea that they all shared the same political views.

Once they started, it was hard to stop. Not only were these women Democrats, they were election saboteurs.

More from GlobalPost: Complete coverage of the US election

In South Carolina, no party affiliation is listed on the voter rolls. Anyone can vote in the primaries — as long as you pick only one. Since President Barack Obama is, presumably, running uncontested, these women thought it more important to try and burst a few Republican balloons than to show support in the Democratic primary scheduled for Jan. 31.

The South Carolina Democratic Party had seen fit to send out flyers to its members, explaining: “You may have seen some emails floating around urging Democrats to vote in the Republican Primary.”

They then went on to say that this was not a good idea.

“We are asking active Democrats to not participate in the GOP primary. We don't want Republicans to interfere with our primaries … so let's practice what we preach. Let them pick their own candidates. Surely, you can see that they are doing a great job of bashing each other,” wrote Lexington County Chairwoman Kathy Hensley.

But the seed was planted. Even those who had not thought of going out to vote on Saturday were suddenly weighing their options.

More from GlobalPost: Will Ron Paul run as a third-party candidate?

South Carolina has nine electoral votes, and has gone for the Republican candidate in every presidential election since 1980. But this year could break with tradition — after all, it was said that whoever won this primary was almost certain to become the Republican nominee, something that few now contemplate with equanimity.

“Whom should I vote for?” ventured Deb.

“What is it you are trying hoping to accomplish?” I asked her.

“Oh, I just want to screw with the Republicans,” she laughed, her eyes twinkling under her mane of white hair.

The group began discussing variations; Mitt Romney they discounted immediately, as “too likely to succeed in November.” Rick Santorum was too sanctimonious, and as for Ron Paul, well, they all liked him, although one voiced the opinion that he was “a few fries short of a Happy Meal.”

They finally came around to the decision that voting for Newt Gingrich would be the best choice — he had the strongest chance of toppling Romney off his pedestal, but the worst chance of beating Obama.

“I’d love to see Gingrich run,” laughed Peg. “Then Obama will win for sure.”

Polls showing Gingrich surging against the president were pooh-poohed.

“Oh, he’ll say or do something crazy and that’ll be the end,” said Deb.

That evening, we had dinner with another group of friends. They, too, had voted proudly in the ballot. One of them, Tim, was quite happy to reveal his choice.

“Would you vote for him in November?” I asked.

“Hell, no,” he answered. “I just wanted to screw with the Republicans.”

Well, they accomplished their goal. South Carolina has spoken. With more than 40 percent of the vote, Gingrich certainly got more than just the disgruntled Democrat vote. But his numbers may be less firm than they appear. The Republican base is badly fractured, and the Democrats are just waking up to the danger that their candidate may face real trouble in November.

Alex Stroman, the political director for the South Carolina Republican Party, does not believe that crossover voting skewed the overall results.

“If this did happen, I think the numbers were very small,” he said. “It did not affect the outcome. Those who went to the polls were loyal Republicans, independents and disaffected Democrats, hoping to choose the best candidate to defeat Barack Obama in the fall.”

He did say, however, that South Carolina had a court case pending to close the primary, which would prohibit crossover voting in the future.

The next battle, in Florida, will most likely sort out the answers. Florida is much bigger than all the previous preliminary elections put together, and the outcome may, finally, give some answers as to the direction the race will take.

But for now, the picture is fairly murky. The South Carolina primary was undoubtedly bad news for Romney; whether it’s good news for Newt is still anybody’s guess.