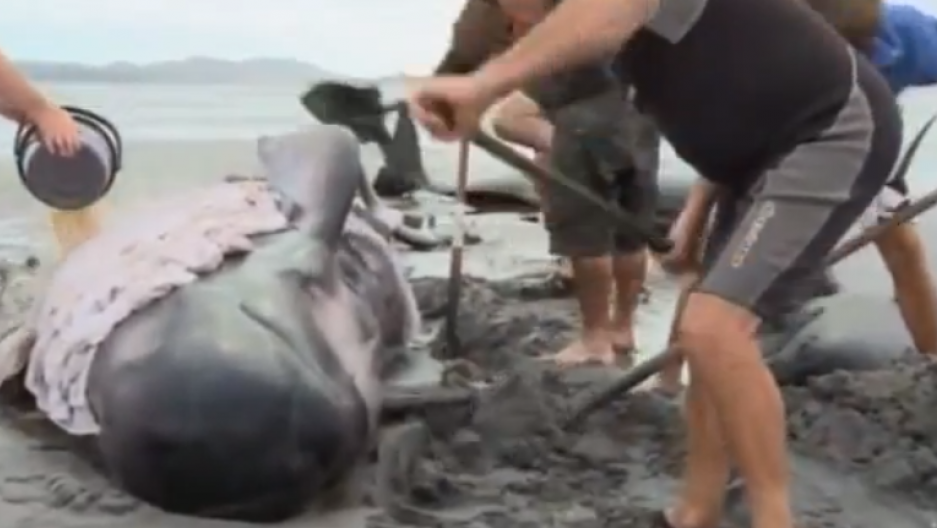 A group of more than 90 pilot whales were beached on a spit on New Zealand's South Island on Monday. Thirty-six of the whales had died by Tuesday, the Associated Press reported.

A final attempt to refloat the whales will be made during high tide today.

According to the Australian Associated Press, the pod has repeatedly been stranded on the spit, in Golden Bay on New Zealand's South Island.

"We tried to refloat the other 40 and they simply wouldn't move. We tried pushing them out to sea, and they just wouldn't go," said the Department of Conservation's area manager John Mason to the New Zealand Herald.

Close to 50 volunteers are helping the rescue efforts with people traveling from as far as Australia, Auckland and Invercargill to participate. The volunteers were working three to a whale and were drenching sheets placed over the whale's backs with water to stop their skin from blistering in the heat, Mason explained.

But the life span of the whales could be limited if they did not manage to refloat themselves at high tide at 11.38 tonight, he said.

"The third day of stranding is pretty much crunch time for the whales," said Nigel Mountford, the Department of Conservation spokesman.

But Mason explained that the whales are still okay: "They are being looked after quite well but then again they have been through two tide cycles now so that's got to have an effect on them.''

According to the BBC, scientists do not know what causes these mass beachings, which are common in New Zealand in the summer when whales pass by on their migration to and from Antarctic waters.

The dead whales will either be buried or left to dry out in the dunes.

More from GlobalPost: Activists injured by Japanese whalers in clash