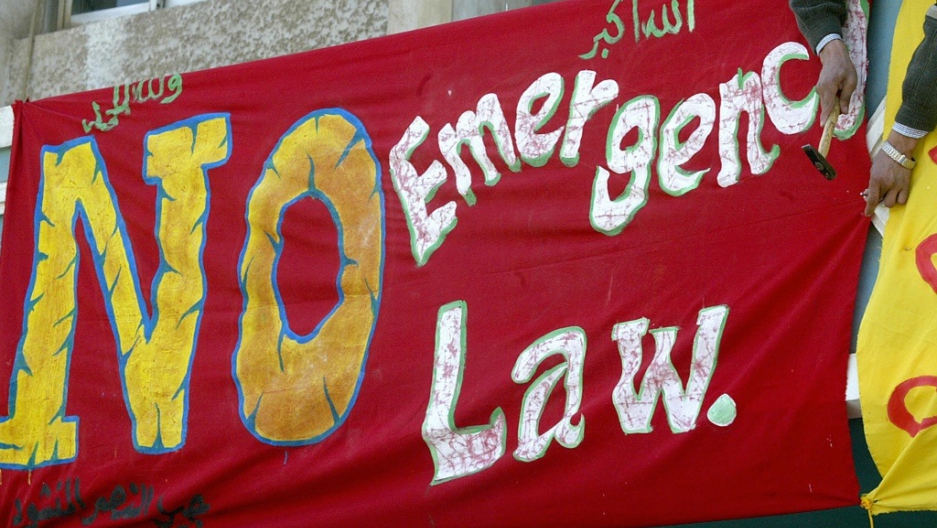 A student fixes a banner that reads 'No, Emergency Law,' during a protest in Cairo on March 5, 2005. Egypt's military ruler, Mohamed Hussein Tantawi, said in a speech on Jan. 24, 2012 that he would lift the decades-old emergency law, which has long been used to silence Egypt's opposition and justify crackdowns on the Egyptian population.
Share

CAIRO, Egypt — On the eve of the first anniversary of Egypt's uprising, defacto leader and head of the Supreme Council of Armed Forces (SCAF), Field Marshal Mohamed Hussein Tantawi, announced he would lift the country's decades-old, repressive "emergency law," but that many saw as a bid to temper rising political sentiment ahead of Wednesday's planned demonstrations.

Tantawi praised the military for safeguarding the "revolution" in the year-long transition period, but said the emergency law would still hold for one exception: thuggery.

The military and the state-run Nile television have often used the Arabic word for "thugs" to describe anti-regime demonstrators protesting police and army abuses over the past year. Activists venting on Twitter seemed unconvinced they would not be rounded up as thugs if security forces decide to crackdown on demonstrations across the country tomorrow.

"It's not difficult for the forces to accuse anyone of thuggery. They already did it before many times. Emergency rule stays," Menna Alaa, an 18-year-old Egyptian blogger posted on Twitter.

Egypt's emergency law is a sweeping tool of oppression that expands police powers, scraps constitutional rights and allows the arrest and detention of Egyptian citizens at any time and for any reason. Egyptians have lived under, and in fear of, the emergency law since 1958.

More from GlobalPost: Egypt: military to expand state of emergency

Still, as the sun set on Cairo's Tahrir Square, activists cobbled together the physical elements of what they hope will amount to a so-called "second revolution" against the ruling generals that seized power last year and have presided over a repressive and volatile transition to democratic rule.

A life-size effigy of former Egyptian president Hosni Mubarak is now strung from a lamppost in the middle of Tahrir Square. Sound stages and tents, adorned with signs and that indicate a major sit-in is planned, also sprout up across the tear-drop shaped plaza that has emerged as both a real and symbolic epicenter of political expression and resistance to ruling regimes here.

But the unifying spirit of the uprising is unlikely to be reproduced this Jan. 25. An uncertain year of military crackdowns, economic recession and increasing resentment of the protesters has polarized the city's landscape into an array of divided and competing political camps.

With Tantawi's concession of emergency police and state powers, many Egyptians already frustrated with protests they see as harming the economy may see little use in demonstrations to topple the regime.