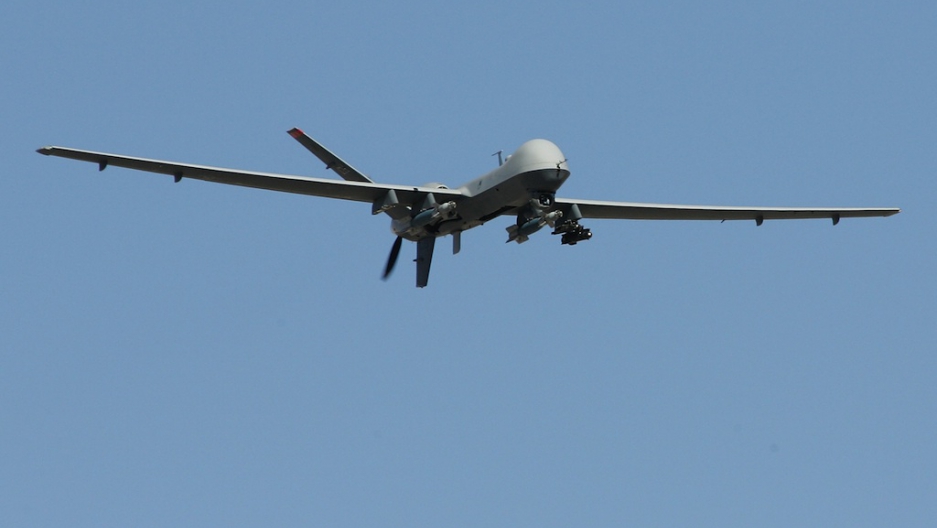 An MQ-9 Reaper flies by on a training mission Aug. 8, 2007 at Creech Air Force Base in Indian Springs, Nevada. The Reaper is the Air Force's first 'hunter-killer' unmanned aerial vehicle (UAV) and is designed to engage time-sensitive targets on the battlefield as well as provide intelligence and surveillance. The jet-fighter sized Reapers are 36 feet long with 66-foot wingspans and can fly for as long as 14 hours fully loaded with laser-guided bombs and air-to-ground missiles. They can fly twice as fast and high as the smaller MQ-1 Predators reaching speeds of 300 mph at an altitude of up to 50,000 feet. The aircraft are flown by a pilot and a sensor operator from ground control stations.
Credit: Ethan Miller
Share

NAIROBI, Kenya — Three missiles fired from a US drone killed Bilal Berwaji, a British-raised Al Qaeda agent and Al Shabaab commander, according to a statement from Somalia's Islamist militants.

Announcing the "martyrdom" of Berwaji, also known as Abu Hafsa, on Sunday morning the Shabaab said:

“Throughout his stay in Somalia, Abu Hafsa participated in most of the
major battles and was known for his gallantry and steadfastness in the
face of the crusaders and their apostate allies. Marching forth along
the path of trials and tribulation, our brother’s devotion to Jihad
was unmatched and his resolve unshakable.”

The statement praised Berwaji’s “burning passion for Martyrdom in the cause of Allah.”

An official in Washington confirmed to the Associated Press that the drone strike had been ordered by the US.

Britain denied reports that Berwaji, 27, was a British citizen but The Guardian newspaper reported that his citizenship had only been revoked a year ago. The Shabaab said that Berwaji was born in Lebanon, raised in West London and went to Somalia in 2006.

He was a close associate of Fazul Abdullah Mohamed, mastermind of the 1998 US embassy bombing in Nairobi, who was killed in a shootout in Mogadishu in June.

Berwaji's death is a blow to the Shabaab which is facing offensives on at least three fronts against Kenya in the south, Ethiopia in the west and a combined force of African Union peacekeepers and government soldiers in the capital. The US only began using drones in Somalia in June and is thought to be launching some of the aircraft from a new base in southern Ethiopia.