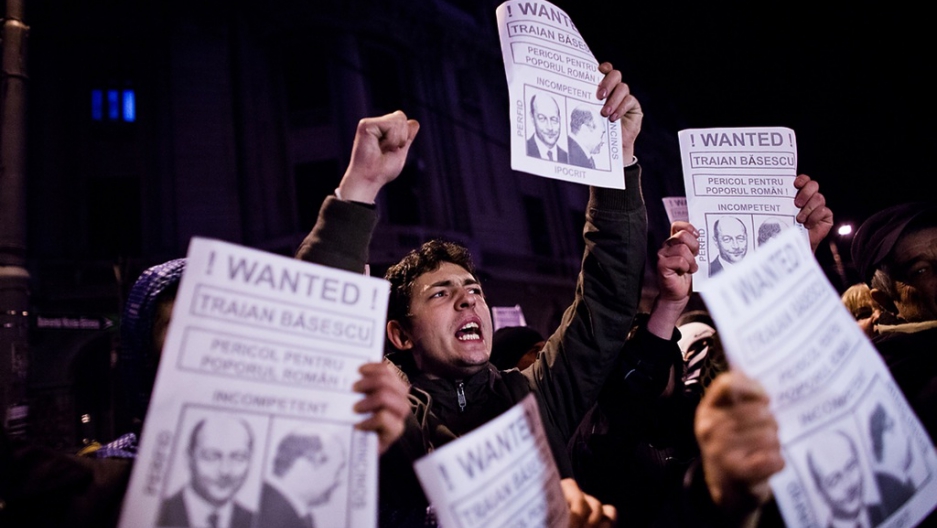 Protesters opposed to austerity measures imposed by the government demonstrate on January 14, 2012 in Bucharest, Romania. Romania has slashed public wages and raised taxes in attempts to cut its budget deficit and meet pledges to both the International Monetary Fund and the European Union.
Credit: Mugur Varzariu
Share

BRUSSELS, Belgium – Romania’s government is hoping the firing Monday of the foreign minister who insulted demonstrators will calm street protests that have raised concerns that the Balkan country could become next EU crisis hotspot.

Minister Teodor Baconschi was sent packing after referring to anti-government protesters as “inept and violent slum dwellers.” His comments have added to the discontent which has driven protesters onto the streets of Bucharest and other cities over the past two weeks.

Romanians are angered by tax hikes and cuts to wages, jobs and benefits introduced by the government in return for an EU and IMF bailout loan.

The country’s economic crisis has been overshadowed by others in the euro zone, but Romania was one of the first EU members to need a bailout in the current crisis – securing 20 billion euros in May 2009, a year when its economy contracted 6.6 percent.

Last March, Romania secured a further 5 billion euros in credit, on condition that it push forward more measures to bring down the budget deficit.

Simmering discontent over falling living standards erupted this month after cost-cutting reforms of the state health service triggered the resignation of health minister Raed Arafat, a Syrian-born doctor who became a popular figure in Romania after founding an emergency response service.

Under pressure from the street protests, President Traian Basescu agreed to review the reforms and re-instated Arafat. Protests however have continued, targeting wider government austerity plans.

Romania has been transformed since the overthrow of the Communist dictatorship in 1989 and the sometimes violent instability that followed. Well-healed young Romanians fill trendy nightclubs and plush restaurants that have sprouted in Bucharest, and shiny new SUVs cruise the capital’s board avenues.

However, the benefits of progress have been uneven. Life is harsh in rural areas and in the capital’s sprawling housing blocks. Among the EU nations, only neighboring Bulgaria is poorer.

Although the protests have been mostly peaceful, there have been some clashes with police. With elections due this year, concern is growing in financial markets and at EU headquarters in Brussels that the unrest could force the Romanian government to backtrack on reforms, creating a new focus for the EU’s crisis.

The demonstrations have not pleased analysts who are keeping an eye the government’s debt. “These protests … are a credit-negative development that will make it more difficult for the Romanian government to continue along the path of fiscal and structural reform,” Atsi Sheth, senior analyst at the rating agency Moody’s warned Monday.