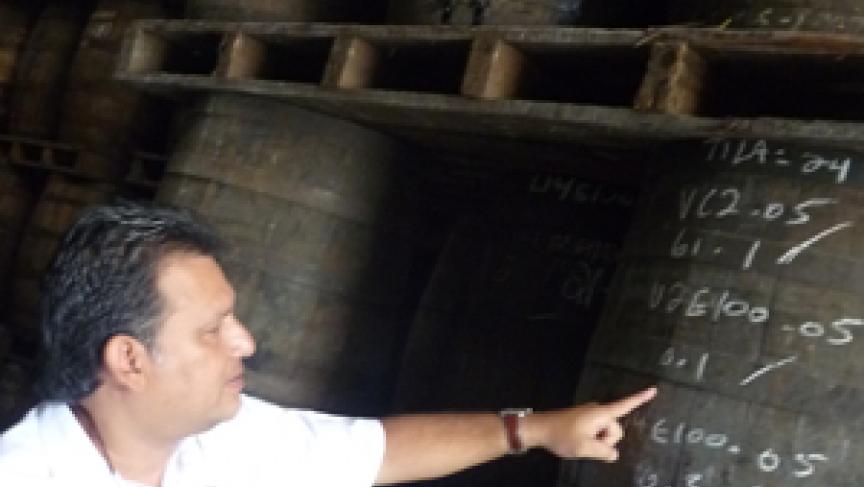 Business is picking up at Nicaragua's Flor de Caña Distillery after a time when the distillery's future was in jeopardy.(Photo by John Otis.)

At the Flor de Caña distillery in the town of Chichigalpa, workers refurbish white oak barrels that once held Jack Daniel’s and other varieties of Tennessee whikey — to be used to age rum.

The oak and the bourbon residue in the barrels add to the rum’s aroma and taste.

“With the wood and with the aging and with the alcohol, we obtain that classical bouquet of the rum," said Mauricio Solorzano, Flor de Caña’s public relations manager

But back in the 1980s, during the Sandinista revolution, Flor de Caña, like many businesses, fell on hard times. Solorzano said supplies were scarce amid the Contra war and a US economic embargo.

“To get the caps of the bottles we had to bring them from Poland. The bottles we used to buy from Cuba because of the embargo and the lack of dollars and everything,” he said.

Then in 1986, the Sandinista government confiscated the sugar mill that supplied the molasses needed to make the rum. Fearing the entire business could be seized, Flor de Caña’s managers began stashing barrels of rum in neighboring Honduras and other places.

“With that threat in our head we started to produce a lot of alcohol, the most possible quantities, and we moved this alcohol to secret places just in case we were confiscated,” Solorzano said.

But the business survived.

After the Sandinistas were voted out of office in 1990, Flor de Caña got its sugar mill back. And because so many barrels had been hidden, the company has one of the world’s largest supplies of aged rum.

That would’ve been no big deal a few decades ago. But now the appetite for high-quality rum is growing, like the popularity of single-malt whiskey. Most rum is aged just a few years; Flor de Caña also sells bottles of 12, 18 and 21-year-old rum.

Once the war ended, the company began an aggressive marketing campaign to export Flor de Caña. But from the company’s perspective, something was missing. Nicaragua lacked a national drink.

“Cuba has their mojito, Brazil has their caipirinha. If you are in Vietnam and you try to make a cocktail like a Margarita you are thinking Mexico,” said Solorzano.

So five years ago, the company sponsored a contest that led to the creation of the Macua – it’s rum mixed with orange, lime and guava juice. The Macua’s another way Flor de Caña’s trying to boost sales.

But after the initial excitement over the national drink, the demand for the Macua has died down.

At a sports bar in Managua, waiter Reynaldo Guerrero said it’s been three months since anyone ordered a Macua. He said Nicaraguans prefer traditional cocktails, like margaritas and piña coladas.

But at the Flor de Caña distillery, no one seems especially concerned about the fate of the Macua. Rum-making tours are on the rise amid a boom in tourism, and the company’s building a Flor de Caña museum and theme park.

And employees claim their rum is so good you don’t need to mix it with anything.