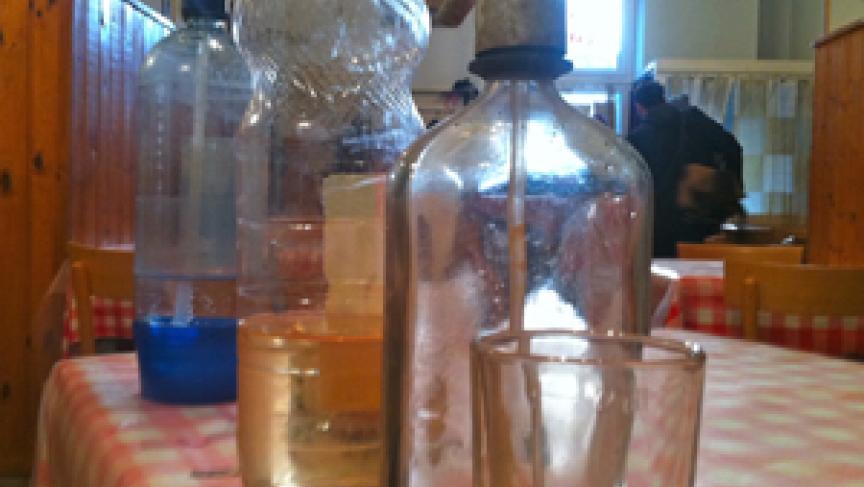 Share
For our Geo Quiz, we want you to name a landlocked country in central Europe. It shares borders with 7 neighbors: Slovakia, Romania, Ukraine, Croatia, Serbia, Slovenia, and Austria. There's no beachfront property on the Mediterranean but the country's got the largest fresh water lake in central Europe, Lake Balaton. And there's plenty of mineral water too from all the hot springs scattered around the country. Bubbly water's on the menu in just about every café and restaurant. The fizzy stuff caught on here back in the 1800s. Ever since, the local version of a wine spritzer called a frÃ¶ccs has been popular. These drinks are cheap too! So can you name the country where seltzer is king? The answer the central European nation of Hungary which is famous for traditional delicacies like paprika and goulash. And to wash it all down, Hungarian prefer their water carbonated and fizzy as Nate Tabak reports from Budapest. At Kadar Restaurant in Budapest, you can be pretty sure of two things. You'll leave with a full belly. And you'll fill up numerous glasses of seltzer. Each table has one, if not two, plastic seltzer dispensers — the kind with old-fashioned nozzles. The seltzer helps wash down hearty Hungarian staples like roasted goose leg. Sandor Orban, who owns Kadar, said regulars don't bother to ask. As soon as they sit down, they fill themselves a glass of what Hungarians know as "szoda." They drink so much of the stuff, Kadar goes though nearly 500 bottles a week. At about a quarter a glass, szoda isn't a bad deal, either. According to Orban, foreign visitors often aren't sure what do with the dispensers, which are staples of Hungarian life. "At first they're a little surprised – they don't understand" he said. "And then they try. You know, they play with it a little bit. They figure it out." But Orban covers the tables in plastic just in case they don't. The szoda at Kadar is hardly a novelty. Seltzer dispensers are everywhere in Hungary. At restaurants, bars, and in homes, it's hard not to find some szoda. Orban traces it back to the early years of communist Hungary. He said the wine was so bad in the 1940s and 50s that seltzer was only way to make it drinkable. But Seltzer actually goes back further in Hungary. In the 1800s, a priest and scientist named Anyos Jedlik pioneered a way to produce carbonated water on a commercial scale. To Hungarians, Jedlik is seltzer's founding father. Just outside Budapest, in Delegyhaza, the fizzy tradition is very much alive at the mom-and-pop owned Szoda Kiraly, or Soda King. The process is very simple. A hose sends carbon dioxide into a metal chamber, and there it mixes with tap water. The Soda King himself is Gabor Mozsolics, a former flight attendant. He's adjusting the pressure on bottle of szoda to get it just right. "If it's very high pressure," Mozsolics said, "it's very dangerous." Last year, Mozsolics and his wife sold more than 100,000 liters out of their family home. Refillable plastic dispensers are the bread and butter of their business, and people here put them to good use, making froccs — or Hungarian spritzers. Tamas Soros makes a hazmester or house master froccs at Baldaszti's Grand in Budapest. "Every combination's got another name, for example, kisfroccs, nagyfroccs, little froccs, big froccs," Soros said, rattling off a list of froccs. There're at least 16 kinds of frocks, each corresponding to a precise mix of seltzer and wine. "It's a fresh, fresh drink. The Hungarian people really like it," Soros said. Tamas Fricz, who's sitting at the bar, said he drinks froccs every day in the summer. "You can get more power from it," Fricz said. "If you're tired, it's a very fresh drink." But Fricz, who's 21, says plain seltzer is the drink of grandfathers. Hungarians his age don't have much of a taste for it, though he's not quite sure why. "I don't. Maybe because of the marketing?" But Mozsolics, the Soda King, said he's not having trouble marketing his seltzer. "It's not about who's a businessman or a bachelor. Everybody drinks it," Mozsolics said. And as a board member of the Hungarian Sodamakers' Association, he knows a thing or two about the seltzer market. According to association figures, 66-percent of Hungarians drink seltzer. The Soda King says that leaves plenty of room for the seltzer business to grow.