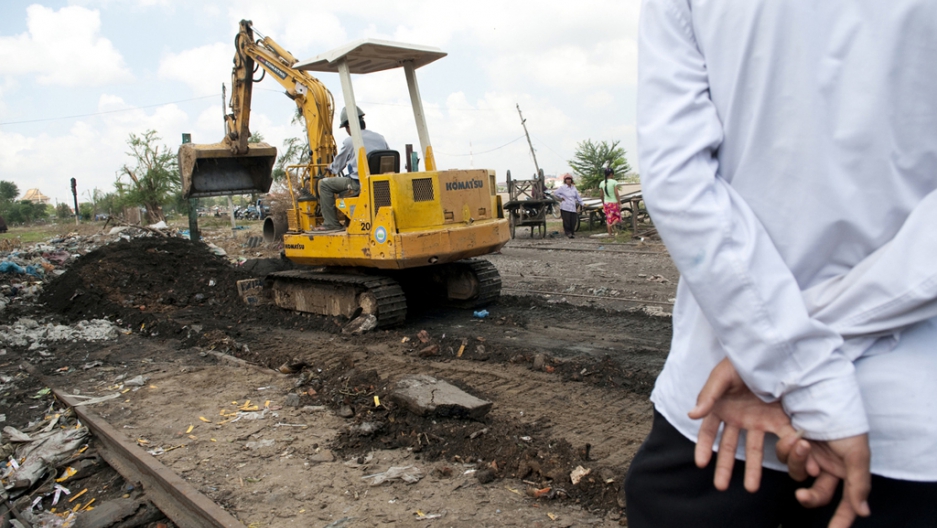 PHNOM PENH, Cambodia — In fast-developing Phnom Penh, land is at a premium, and it's the poor who pay the price for high-end development.

It is not a new story. More than 400,000 Cambodians have been evicted from their homes or have had their land grabbed since 2003, according to local human rights groups.

And the trend continues to gather steam, despite a high-profile case last year in which the international community got involved, if only for a moment. In 2011, the World Bank froze loans to Cambodia after 20,000 people were faced with forced eviction.

But even the freeze, which stands today, hasn't stemmed the tide of evictions. The government continues to favor major development firms over the poor Cambodian majority.

In the most recent case, a major development company, Phan Imex, bulldozed the modest slum homes of 300 families in a neighborhood called Borei Keila in the capital Phnom Penh.

Anatomy of a forced eviction

Hundreds of Borei Keila residents fought against armed riot police with Molotov cocktails and rocks in a battle that began in the early morning of Jan. 3, and continued for hours with many injuries on both sides. Eight protesters were arrested in the fray, and remain in prison as of this writing.

The next day, evictees took to the streets, protesting outside international embassies for help.

“We thought we were dead,” said one woman with a recent wound on her face. She said she was sleeping in her Borei Keila apartment when bulldozers began to knock it down.

“We were not able to get anything out of the house — this is all I have, a krama [a Cambodian scarf] and some dirty clothes,” she said.

Most of the evictees wanted to remain anonymous, concerned about possible government backlash.

Phan Imex had promised to build 10 new apartment buildings for 1,776 residents to replace the demolished homes, in a deal reached with villagers and the government in 2003. But Phan Imex announced in 2010 that it could only afford to build eight buildings, leaving 300 families in the lurch.

The left-out families were offered plots of land in two relocation sites instead of finished apartments. The sites, mind you, more closely resemble desolate refugee camps. Confused children, far away from the schools, roam in packs. Their families scramble to build shelters to keep off the sun, and keep out the mosquitoes.

Protesters weren’t safe from the law either: 30 women and children, peacefully protesting in downtown Phnom Penh on Jan. 11, were thrown into vans and sent to a detention center. Held without charge, the government claimed the women and children were being kept to “to figure out their real needs and intentions."

Of these, 20 of the detained women and children staged a dramatic escape on Jan. 18, climbing over the walls as security personnel looked on, taking tuk-tuks to a local NGO, the Housing Rights Task Force.

More from GlobalPost: Cambodia pushes out the poor

"This eviction shows once again that Cambodia's political and economic elite can operate with absolute impunity, without regard to the law," said Tim Malay, president of the Cambodia Youth Network, condemning the evictions in a press release.

As of last week, 100 families were living at one of the relocation sites, Phnom Bat, which is about 35 miles from the center of the capital. But Phan Imex has formally recognized only 60 families as having claim to a plot of land there, which leaves the other 40 vulnerable to potential future eviction.

The company has demanded petitioners for plots present residence documents and be "recognized" by a local authority. But finding the right documents and getting recognition is proving hard for some evictees. Many lost their paperwork when their homes were destroyed.

"The company [Phan Imex] is fully supported by the governor and the head of the government," said opposition lawmaker and human-rights activist Mu Sochua of the evictions. "There is total silence from their part, while the company calls the shots. This is total lack of accountability."

What can former residents of Borei Keila expect?

"The only thing the future holds for these Borei Keila families is the desperation of dispossession that affects a rapidly growing number of Cambodians who have been forced off their land," said Human Rights Watch Asia deputy director Phil Robertson.

"There is no better way to abuse a person's economic, social and cultural rights than to strip them of the land where they have resided for generations," he added.

When the World Bank got involved

The Borei Keila evictees face a situation similar to that of the Boueng Lake evictees, who made headlines in 2010 and 2011 as they waged their own battle against Shukaku Inc, a development company headed by a senator from the ruling Cambodian People's Party.

As Shukaku pumped sandy sludge into the inner-city lake and the homes surrounding it to make way for high-end development projects, around 20,000 families were faced with forced eviction.

Some families accepted inadequate compensation for their homes and left, but many did not. In response to the evictions, the World Bank froze loans to Cambodia in August of last year, a freeze that has yet to be lifted.

In response to the freeze, Cambodian Prime Minister Hun Sen awarded 12.44 hectares of residential land to villagers displaced by Shukaku Inc, and over 500 plots have been awarded to date, although protests and disputes continue.

One Boeung Kak evictee, Kun Chantha, joined in the Borei Keila protests this month outside the US Embassy.

“I want you to go back and ask Phan Imex what else they want from you,” a passionate Chantha told the crowd, who stood in the hot sun, largely ignored by Embassy staffers who passed in and out of the heavily fortified gates.

“Give everything to them ...” she said. “Even if you are naked, you shouldn’t be ashamed. The people who should be ashamed are the government.”

How widespread are forced evictions?

According to a recent USAID report, 7 percent of Cambodia's land outside protected areas has been granted to private firms for agro-industrial plantations.

These concessions have been made at the expense of the average Cambodian: according to the report, landlessness has been on the rise since the late 1990s, and as of 2009, an estimated 20 to 40 percent of rural households had no formal title to their property.

Cambodian law dictates that land can be taken from individuals if it's in the public interest, but the law also says the government has to pay the market value of the land in compensation to evictees, a stipulation that's rarely honored.

The reality of relocation

There are no bathrooms, medical care is far-off, and water quality is poor. NGOs are forced to drop off food and medical supplies. Most of the men are in the city, trying to eke out a living far from their families.

More than two-thirds of households in relocated areas were over $869 in debt (in a nation where per capita gross domestic product stands at only $830 a year), while 35.7 percent of relocated people are unemployed, in comparison to 18.4 percent prior to the forced move.

Despite protests and local media attention, the international community has paid little mind to the plight of Borei Keila residents, or to Cambodian land-grabbing issues in general.

Many feel that sweeping international action is the only way to get government attention — and specific action at that.

On Wednesday, four people protesting a local land grab were shot in Snuol, in southern Cambodia. Prime Minister Hun Sen has condemned the shootings, perpetrated by private security guards, but whether they will be brought to justice remains to be seen.

"The Cambodian government only responds to a mixture of embarrassment and fear of losing development projects," said Robertson of Human Rights Watch. "The international community has to continue to demonstrate the political will to confront these abuses whenever and wherever they occur."

But as January drags on, relocation sites fill up, and 8 Borei Keila protesters languish in prison, no condemnations like the World Bank loan freeze are forthcoming.

As one evictee said outside the US embassy, "Only the poor help the poor. The rich and powerful would never dare to come here to help us."

Clarification: The figures at the top of this story pertaining to how many Cambodians have faced eviction or had their land grabbed since 2003, as well as how many faced eviction at Boeung Kak in 2011, have been updated.