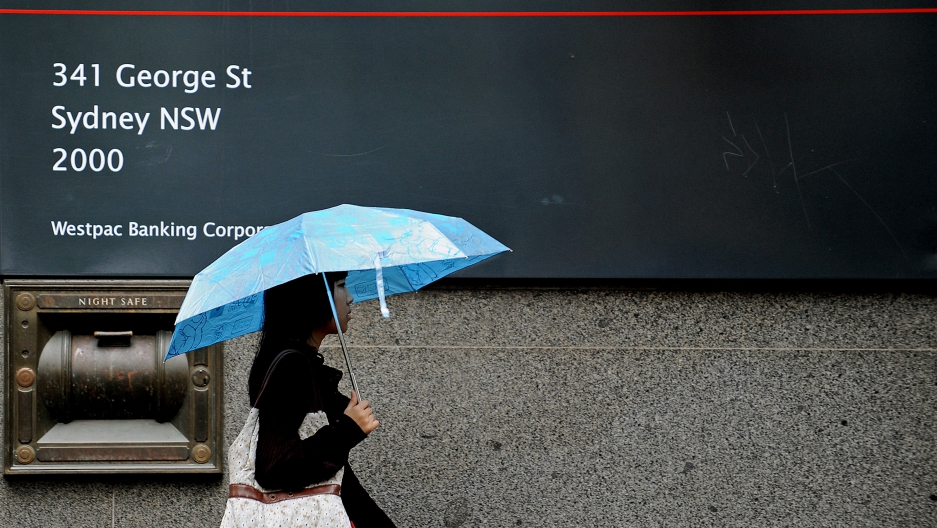 A woman shelters under an umbrella as she walks past a Westpac Banking Corporation branch in central Sydney on October 26, 2009.
Credit: Greg Wood
Share

A slap in the face would be putting it mildly.

Australian finance sector workers say they are dealing with the ultimate professional insult — being asked to train the same workers who will be replacing them at half the cost to the bank.

"She has been shadowing me, sitting next to me and I have to teach her how to do my day-to-day job," Westpac staffer of 15 years, Russell Siachico, told The Sunday Telegraph, referring to her replacement.

The paper claims the workers are Indian, in Australian on temporary visas, training at the bank's downtown Sydney offices.

Siachico said her replacement had been "sitting next to me like a sponge, sucking in as much information as possible. It's devastating. I feel insulted and very low."

After the so-called "knowledge transfer," the overseas workers will return to India to teach their colleagues, who are paid far less than Westpac's Australian employees.

Westpac is one of the country's so-called "big four" banks — hailed as the saviors of livelihoods, savings accounts and investments during successive financial downturns due to their prudent policies.

Despite a recent downgrade by ratings agency Standard and Poor's, from AA to AA-, the big four remain among a handful of highly rated banks in the world.

According to Australia's ABC News:

S&P made the point that Australian banks are bolstered by conservative regulation and the banking sector's low risk appetite.

The top four made a combined $25 billion in the 2010/11 financial year, according to The Australian newspaper.

However, all are slashing costs and shedding jobs "to sustain earnings growth and keep investors happy," according to the paper.

Keeping investors happy has proved tricky lately, with the banks stirring public anger in late 2011 by failing to pass on a 25 basis point cut in official interest rates to consumers. NAB, for example, retained a fifth of the Reserve Bank of Australia's rate reduction.

Bank chiefs had argued that the Europe debt crisis was forcing up their own borrowing costs.

All four passed on a subsequent pre-Christmas interest rate cut, however, apparently hearing the message that the bills of many Australian households were rising faster than their incomes, as the SMH defly put it.

The Financial Sector Union, meantime, told The Sunday Telegraph that at least 188 Westpac employees had been offered buyouts, and up to 2,000 more jobs were at risk.

But before that happened, the bank wanted to make sure its replacement workers have the very best of training, and where better to look than experienced staff before they're shown the door, it seems.

ANZ, another of the big four, has already announced its first round of official job cuts, while the Commonwealth Bank of Australia and National Australia Bank are expected to follow.

Most of the Westpac jobs being sent offshore were in IT — such as internet banking — the Telegraph wrote, quoting one Westpac staffer as saying the new recruits "don't have any experience in testing systems and most of them have never worked in a bank."