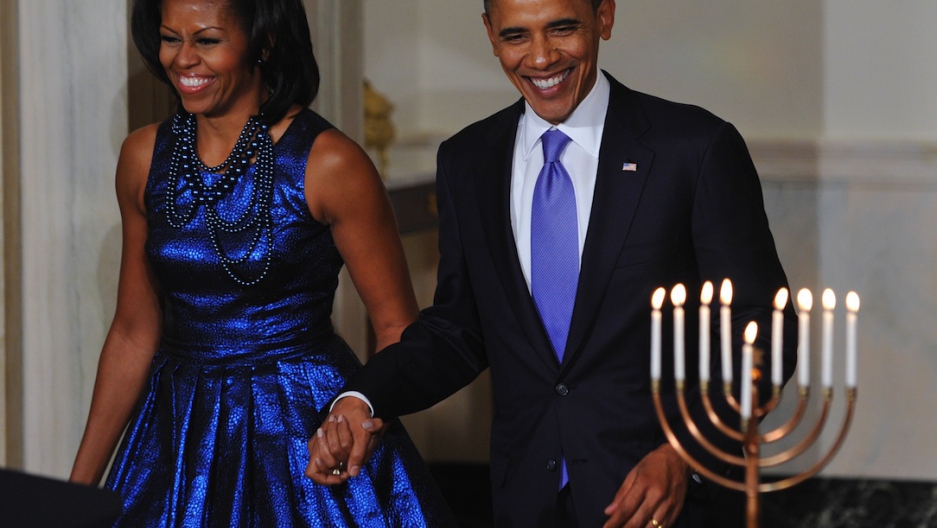 US President Barack Obama and First Lady Michelle Obama arrive for a Hanukkah reception on December 8, 2011 in the Grand Foyer of the White House.
Credit: Mandel Ngan
Share

But that’s exactly what the owner of the Atlanta Jewish Times did Jan. 13, and now he’s facing a chorus of vocal opposition and a Secret Service investigation.

"Give the go-ahead for U.S. based Mossad agents to take out a president deemed unfriendly to Israel in order for the current vice president to take his place and forcefully dictate that the United States' policy includes its helping the Jewish state obliterate its enemies," Adler wrote in an opinion piece called “What would you do?”

Adler issued a quick apology on Friday, saying, “I very much regret it. I wish I hadn’t made reference to it at all.”

However, the Secret Service isn’t taking the threat so lightly, CNN said.

“We are aware of it,” Secret Service spokesman George Ogilvie told CNN. “We are taking the appropriate investigative steps."

More on GlobalPost: White House shooting suspect to be charged with assassination attempt

While the weekly Atlanta Jewish Times has a modest circulation, Gawker.com found the op-ed piece and brought it into the national spotlight.

Reaction from Adler’s fellow Jewish journalists has been swift. Chemi Shalev lamented the poor choice of words at Haaretz.com.

“It will indeed take a long time and a great effort to undo the damage that Adler has wrought: In one fell swoop, he has defamed Israel by implying that it might, in anyone's wildest dreams, consider such a kooky conspiracy,” Shalev wrote. “He has stained American Jews by appearing to supposedly represent their twisted way of thinking.”