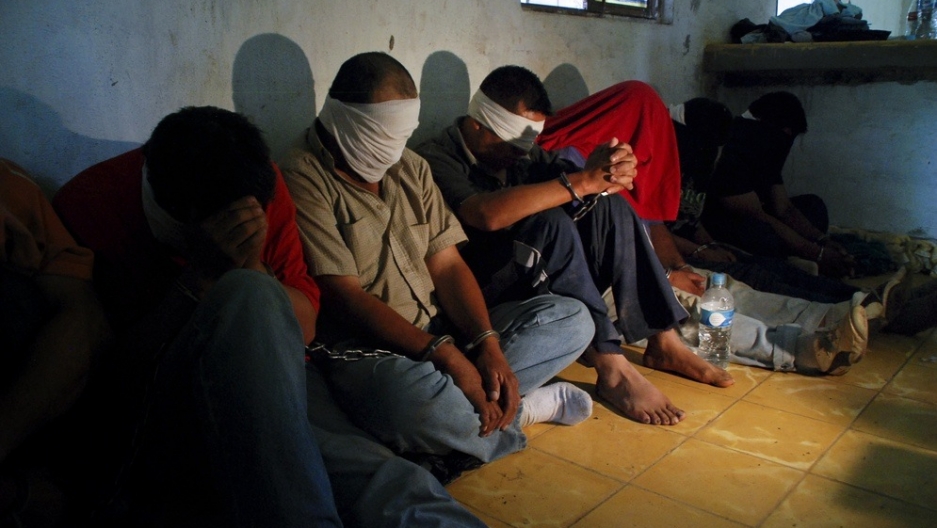 MEXICO CITY — Mexico's wealthy embed GPS chips under their skin, fatten their SUV’s with bullet proof armor, and hire trucks of gun-toting bodyguards to follow them to the shopping mall.

While Mexico’s merciless drug war has scared off tourists and investment dollars, it has fed one niche industry: private-security services.

During the five years since President Felipe Calderon took power and declared war on drug cartels, Mexico has been shaken by 47,000 drug-related murders as well as rocketing levels of kidnapping and extortion.

It now has an army of more than 10,000 private security guards — including many former soldiers — who are licensed to carry guns to protect the company’s 2,500 Mexican clients.

Many foreigners, including Hollywood stars, diplomats and businessman, also hire entourages of bodyguards when they traipse around Mexico.

In total, there are more than 10,000 security firms across Mexico, which take more than $3 billion a year in revenue, or about double what was spent here on security services in 2006.

The companies focus mainly on protecting Mexico’s wealthy minority, with costs of many services out of the reach of the middle class.

Mexico’s minimum wage is $5 a day.

Multisistemas spokesman Gabriel Avalos says the company works to protect their clients round the clock, from their home to their work to their leisure activities.

“We work with clients on their habits so they don’t become victims of kidnapping or other crimes,” Avalos said. “We help them build circles of trust, both among inner circles of friends and families, and outer circles of employees and others. In the majority of kidnappings, someone on the inside is involved.”

Mexican police received reports of 1,847 kidnappings for ransom in 2010, one of the highest rates in the world.

Anti-crime groups say that for every kidnapping reported, as many as 10 could go unreported, as kidnappers threaten to kill the victims if police get involved.

Kidnapping gangs are notoriously known to torture or mutilate victims to pressure relatives for ransom payouts.

Most security companies also protect their clients with GPS systems, which they can carry in their cars or under their clothes.

Others go a step further actually wearing bracelets that cannot be removed — devices that use technology similar to that used to watch convicts on parole.

One company called Xega has even sold a chip that can be placed under people’s skin to trace their whereabouts.

The device is about twice the length of a dime and is normally implanted between the shoulder and elbow area.

“We offer a solution that makes families feel safe and tranquil,” Xega says on its website. “We have a system that prevents kidnappings and emergencies at the most advanced level in the world. It is designed to operate in the most dangerous places in Latin America.”

Some human-rights activists fear that the expanding army of private security guards poses the danger of unregulated gunmen roaming the street.

On Thursday, police in the southern state of Oaxaca announced that they had shut down 21 security firms for operating without the proper licenses.

One gunmen working for the Mano Con Ojos gang, which kidnapped and sold drugs in the Mexico City area, also said he had worked at one point in a private security company.

However, Multisistemas say they carefully screen and train all their employees.

“Our clients are almost giving us the keys to their house so we have to have a great deal of trust,” Avalos said.

None of the clients have been victims of kidnappings and none of the company’s guards have got into firefights in recent years, Avalos said.

“Our philosophy is to prevent,” he said, “not to fight."