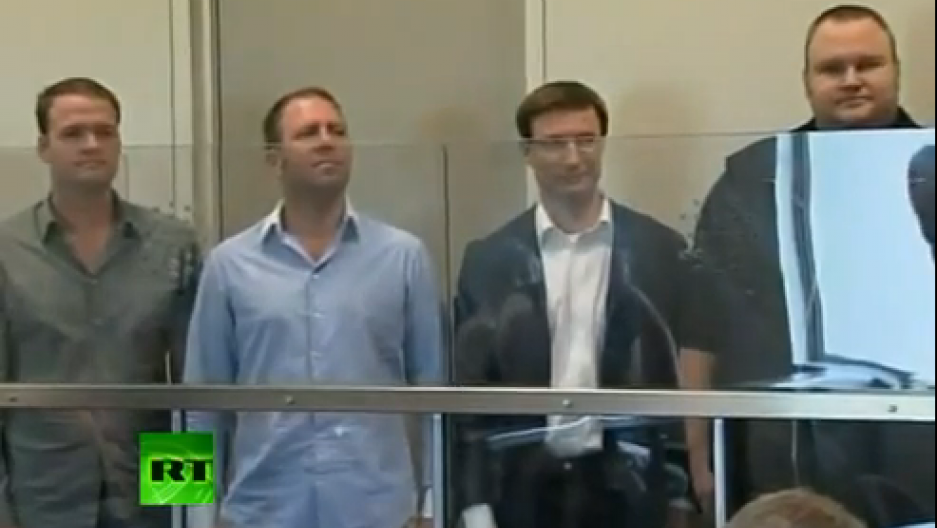 Former hacker Kim Schmitz, better known by his alias Kim Dotcom, has appeared in court in New Zealand, where he was arrested yesterday in connection with US prosecutors' copyright theft case against Megaupload.com.

More from GlobalPost: Megaupload shut down by federal prosecutors

Only four have so far been detained. They appeared in court in Auckland today, where they were denied bail. Extradition proceedings are underway to have them sent to face trial in the US, the Sydney Morning Herald reported.

Schmitz, a 37-year-old German national who also holds Finnish citizenship and has residency in Hong Kong and New Zealand, made $42 million USD from Megaupload and associated websites in 2010 alone, according to the FBI's indictment. He has prior convictions for insider trading, credit-card fraud and embezzlement and has hacked the computer systems of banks and the Pentagon.

He was taken into custody yesterday during a dramatic raid on his home, a luxury property north of Auckland known as the "Dotcom mansion."

According to Agence France Presse, armed police had to cut into a locked safe room where Schmitz had barricaded himself with a sawn-off shotgun. Officers also seized his collection of luxury cars –with number plates reading "God," "Mafia Hacker" and "Guilty" – and froze up to $10 million NZD ($8 million USD) in a number of New Zealand bank accounts.

More than 20 similar raids have been carried out in nine countries in connection with the case.

One of the lawyers representing Schmitz and his associates, Ira Rothken, said the charges were "without merit." He told Radio New Zealand:

"Whether it's search engines or YouTube or any user-generated content site, they're littered with other people's copyrights.

"The test for liability isn't whether or not a website actually hosts copyrighted content; the question's much deeper – and that is whether or not an internet service provider should be responsible for other folks uploading and downloading such copy."

Schmitz instructed authorities to allow reporters to film his court appearance on Friday, saying: "We have nothing to hide." Watch the video, courtesy of RT News: