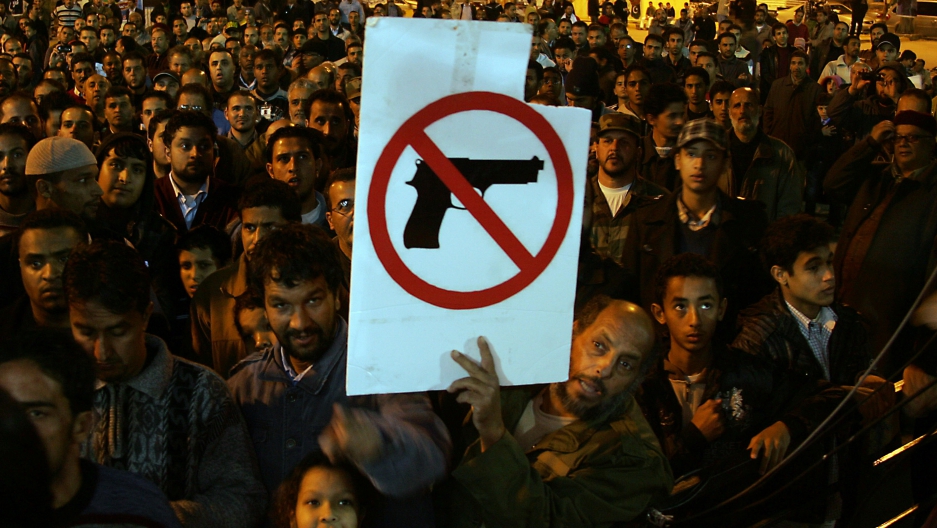 A Libyan demonstrator holds a sign as people gather for a protest calling for the disarming of militiamen in the eastern city of Benghazi on Dec. 13, 2011.
Credit: Abdullah Doma
Share

MISRATA, Libya — As students and teachers gathered in a large hall at the University of Misrata this week, the atmosphere was one of joy and celebration. Balloons decorated the room. Camera’s flashed all around as they waited for the party to begin.

“We are the first students in Libya to be able to graduate without having to bare the title The Great Socialist People's Libyan Arab Jamahiriya on our certificates,” said a young female student as she began her speech to her fellow graduates.

The speeches that followed praised the rebel fighters and the victory that brought freedom to Libya. Excited graduates donned ceremonious hats as they ate cake and spoke with pride of their new country and newfound liberty. The room was full of hope and optimism for a bright, new, united Libya.

On the streets outside and behind closed doors, however, it is a different story. Not everyone is speaking with such pride about the outcome of Libya’s eight-month civil war.

“None of us loved Gaddafi, but before things were OK,” said a 21-year-old ex-rebel fighter as he sat with fellow rebel friends in Benghazi last week. “We had money, free education. If we fought with a knife in the street we’d be arrested. Now people fight with Kalashnikovs and grenades and no one does anything.”

As the group, all of which asked to remain anonymous for fear of reprisals, spoke of the current problems, another young fighter took his turn.

“There is no money, no jobs, everyone has guns, everyone is scared,” he said. “Now I wonder why we made this revolution. The only result was so many martyrs.”

The mood among many young fighters is similar.

“Half of Misrata would agree things were better before, every night we hear the guns and bombs. If you write my name, maybe tomorrow I won’t be here,” said a 23-year-old rebel fighter as we drove past the ruins of a house destroyed in a grenade attack a few days before.

The young generation of ex-rebels has turned its frustrations on the new regime. Many of them remain out of work and have turned to drinking and drugs to cope with post war trauma. The sudden absence of fighting has left an abundance of time to dwell on all the death and killing of the last year.

For the older generation, it is the worry of providing for families under the current circumstances that is all consuming.

“Libya is in a critical situation and things are still not stable,” said Ahmed Alsied, a computer programmer who became a leader among the Misrata rebels. “It’s hard in so many ways. There is no money. All our money in the world was frozen. The banks are broke. Most people are having problems psychologically.”

Alsied spoke emotionally of those lost in battle and the difficulty of families and fighters now struggling to cope with loss. But despite the problems, Alsied, like many others, remains optimistic for the future of Libya.

“Some people are still saying Gaddafi’s period was much better,” he said. “This is really wrong. The young guys might think that the Feb. 17 revolution would change their lives very quickly. In fact they don’t appreciate the situation of the new government and they don’t know the challenges it faces. They thought they’d be rich instantly. That’s why they say Gaddafi’s period was better — they are just under stress.”

Khadija Yusef, a teacher and mother of four, spoke with a similar optimism. She said among the women there is much talk of the Gaddafi period when money, work and school books were not the issue they have now become.

More from GlobalPost: The mad dash for Libya's oil

“Did they think a magic wand would wave once Gaddafi was dead and instantly we’d have a new Libya? It doesn’t work that way,” she said as she prepared tea in the family kitchen. “Libya is tired. After 42 years and now one year of fighting, she is tired. She needs time to get back on her feet, but she will do it. In time we will have our new Libya.”

National Transitional Council Justice Coordinator Jamal Bennor said the new government faced many challenges and that things needed to improve fast. He said internal conflicts within the government and a hazy “division of authority” delayed decision-making.

“Until this moment I was so optimistic,” Bennor said. “But we missed a lot of time to manage ourselves and our plans in our struggle just to be united. Our people are still very worried about their future.”

Adding to concerns is a huge stockpile of weapons that remains in the hands of civilians and militia groups.

“The youth will not leave their guns in this period or for next few years,” Bennor said. “They need to secure their revolution and we still can’t trust each other enough.”

Hundreds of rebel fighters, like Lutfy Alamin, have turned their weapons over to the authorities, but thousands more have not.

“Unfortunately, only the responsible people who want peace and stability are handing in their weapons,” Alamin said. “The people that need to be disarmed most urgently will not hand them over so easily.”

Ibrahim Mohammed Alsherikicia, head of the Misrata branch of the transitional government’s Ministry of Security said these weapons are the biggest problem the developing police units face. Additionally, the criminals released by the Gaddafi regime are still at large and now armed. Prison records were destroyed in Misrata during the revolution, he said, so these men are now “free criminals” and all of them are armed. Until they are caught committing another crimes, he said, there is no evidence to arrest them.

However, Alsherikicia said the reports of minor street clashes in Misrata have dropped from about 10 per month to around four a month since the revolution ended.

“If you compare this to the amount of weapons in the streets, it’s very little,” he said.

However, celebratory gunfire and minor clashes between rebel units continue to spread fear in the community. There is also the ongoing problem of “midnight explosions” — grenade or RPG attacks on local houses, shops and offices. Alsherikicia said most attacks are on the empty property of Gaddafi loyalists that fled at the beginning of the revolution, but every few days rumors of shootings and deaths continue to circulate.

As she served her freshly prepared tea, Khadija Yusef spoke of the concern the community shares over these ongoing skirmishes.

“Each night we hear the bombs and guns,” she said. “When we hear of even one death now we are so, so sad. Before we would hear 10, 15, 20 martyred, but they gave their lives as a gift for a new Libya. Now what do they die for? To advance their kateba [battalion] above another? Even one of these wasted deaths makes us so, so sad.”

Still, along with the negatives, the benefits of the rebel victory are also beginning to emerge for the Libyan people.

For Khadija, the most important change is the freedom to speak for both men and women. Things may not be perfect but everyone is free to ask for change, she said. They no longer are restricted to whispers among like-minded family members.

“It will take time. But the Feb. 17 revolution was successful! From this we gained our freedom. We paid the price for it but no matter what we’ve made it. It’s freedom and we feel our freedom.”