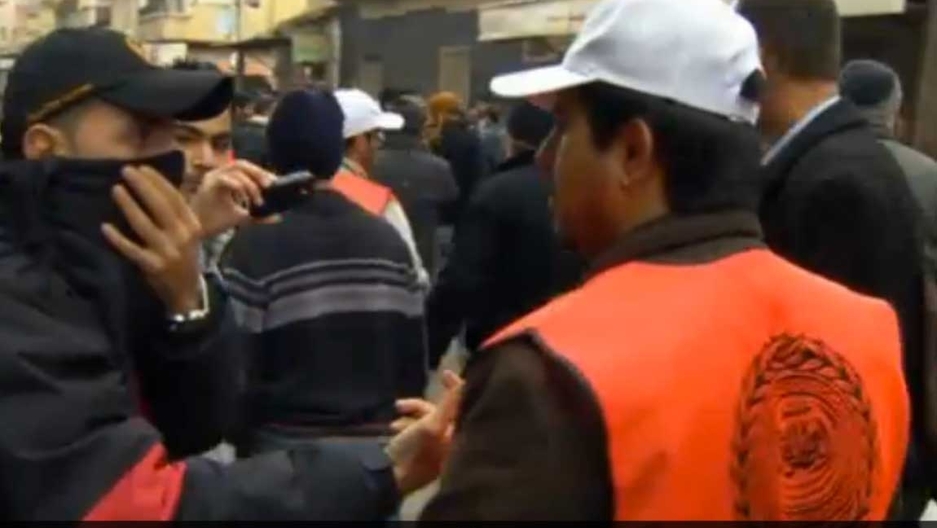 Arab League monitors on the streets of Syria. (Photo: BBC)

Share
The crisis in Syria is approaching a turning point. The mandate of the Arab League observer mission officially expired Thursday, and this weekend Arab League foreign ministers will consider its fate. By most accounts, the mission has been a failure. Some observers have called it a "farce." The 165 monitors were supposed to stop the attacks on opponents of the government of President Bashar al-Assad. But the crackdown on dissent has continued since the mission started in December, and there are reports Thursday of 20 more protestors killed by the regime. The BBC's Lina Sinjab in Damascus tells The World's Marco Werman that the Syrian regime has been critical of the monitors "since day one." "They've even attacked them on several occasions in several cities. And they are not happy with what they are doing," says Sinjab. But opponents of Assad's regime say the observer team has given the Syrian regime diplomatic cover for an assault on activists. Amid the continuing violence, the emir of Qatar has suggested sending Arab troops to Syria. Syria's government has rejected the the proposal, and Sinjab says it is a non-starter for many Syrians. "They feel … sending Arab forces into towns …. is going to destablize the country," says Sinjab. "The government officially said they cannot protect any Arab forces, and that they will be killed." Some analysts warn of the possible unintended consequences of foreign military intervention. Sinjab says the opposition hasn't entirely abandoned the idea of an observer mission as a way of exerting pressure on the regime. She says they want the mission to be bigger, and have a broader mandate. "On a larger scale, with real freedom for them to move around and no restrictions, it could help (Syrians) go out in bigger numbers in the streets," Sinjab says. Sinjab traveled Thursday to the southern province of Deraa. She says, "the streets are almost empty . Families have been looking at us from windows, not daring to come down to us and talk to us. But still we managed to find some defiant young people including children who called us into their own street to tell us their own stories of violence, their own stories of martyrs who have been killed by security forces."