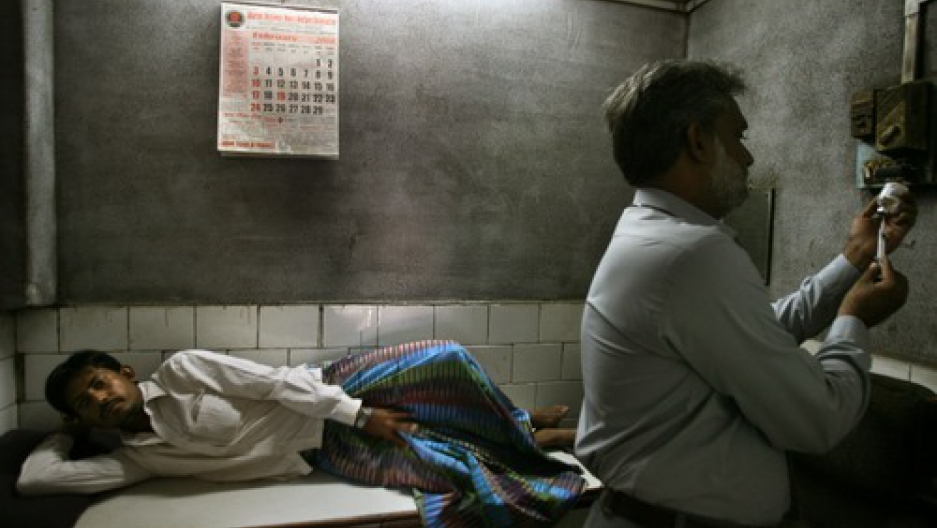 This is one of the safer, cleaner health clinics available to the poor in India -- where public spending on health care is abyssmally low. Meanwhile, two-thirds of women seeking abortions go to "unsafe clinics" to have the procedure.
Share

Unsafe abortions are the route "chosen" by two-thirds of Indian women, despite the country's liberal laws, according to a new study by the World Health Organization (WHO).

The WHO says a whopping 66 percent of the abortions India recorded in 2008 were "unsafe," with about 200 women dying per 100,000 operations, according to the Times of India. Meanwhile, India also accounted for about two-thirds of all abortions performed in south and central Asia.

The paper quotes lead author Dr Gilda Sedgh from the Guttmacher Institute as saying, "Abortion is legal in India and the services are much safer that many other developing countries. But for some reason, women choosing to abort are not taking advantage of this liberal law. They are also getting abortions done in unsafe clinics. That is why a good measure of abortions in India is unsafe."

Leaving aside whether abortion itself is a fundamental right or an evil aberration, three guesses what "some reason" might be.

1. The government spends a pittance on public health, as private hospitals for wealthy Indians and "medical tourists" mushroom across the country and free-market ideologues stump for a system based on US-style health insurance?

2. A good portion of abortions are actually what India terms "female feticide" -- as parents opt to kill their daughters and try again for sons?  (Yeah, my logic is a little flawed here, as the richer places in India actually have reported the lowest female to male baby ratios).

3. The whole system is brutally exploitative? Due to the terrible shortage of legitimate options, you've got fake doctors pushing everything from sterilization to organ harvesting.