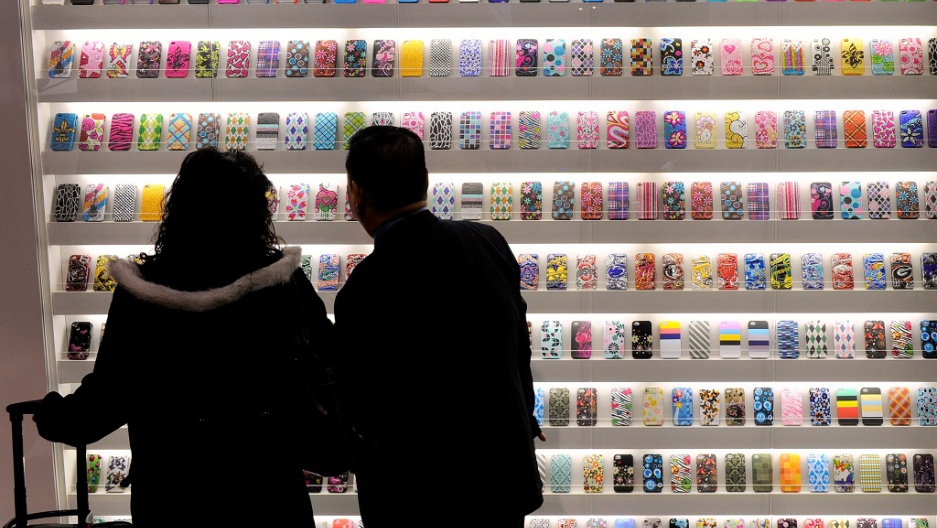 Attendees shop for cell phone cases at the 2012 International Consumer Electronics Show at the Las Vegas Convention Center January 12, 2012 in Las Vegas, Nevada. Sweden will soon be the first developed country to have the ability to pay by cell phone at its stores.
Credit: Ethan Miller
Share

MALMO, Sweden — Sweden is racing to become the first developed country whose people regularly pay for things with their mobile phones.

The country’s four leading mobile phone companies will soon launch a combined mobile wallet service, which will allow payments at shops, between users, and to vending and parking machines. The scheme uses “near field communications” to allow to payments to be made by simply tapping a phone against another or against a vendor’s terminal.

Because four mobile providers — Telia, Tele2, Telenor and 3 — have formed a joint venture to provide the service, it will be available to 97 percent of Swedish mobile subscribers from the moment it goes live this summer.

The group, presently called 4T Sverige, will launch their new brand within days, and then begin tying up deals with shops, train and bus companies, and the rest.

Sweden is racing against other countries — notably the US, UK, Denmark, France and Germany — which are also on the point of seeing ‘mobile wallets’ join the mainstream.

In the US, a coalition of AT&T Mobility, T-Mobile USA, and Verizon Wireless, are planning to launch their ISIS payment system at some point in 2012, starting in Austin, Texas.

Google Wallet launched in September 2011, but it is only available to those owning a Nexus S phone on the Sprint network, and few shops are enabled to take payments.

In the UK, three mobile phone providers — O2, Vodafone, and Everything Everywhere — have combined to launch a service, so far known only as Project Oscar. And in Denmark, TDC, Telenor, TeliaSonera and 3, have combined forces.

“We think that this will be first instead of cash,” said Lars Aase, of Accumulate, which is providing the security system for the four Swedish operators.

“I think it’s very good that they’re trying to set a standard. It’s user convenience. If you had four different systems, it would be a hassle if you change mobile operator.”

He said that PayEx, which is developing the payment systems, has already launched a successful pilot payment network, signing up some 200 merchants in its home base on the Swedish island of Gotland.