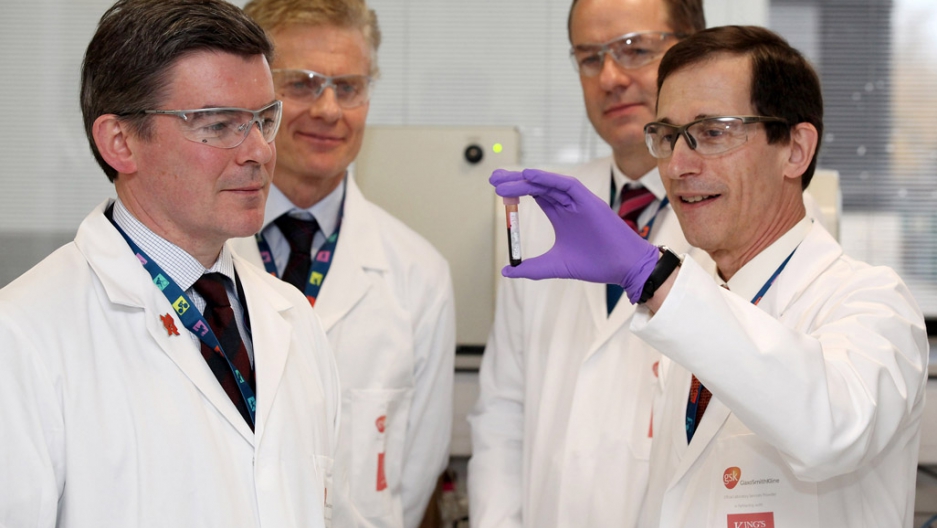 Olympics minister Hugh Robertson (left), London 2012 Chief Executive Paul Deighton (second from left), and CEO of GSK Sir Andrew Witty (2nd from right), are shown a vial of blood by Professor David Cowan, the Head of Science for London 2012, in the anti-doping laboratory which will test athlete's samples from the London 2012 Games.
Credit: Oli Scarff
Share

The London 2012 committee rolled out the most high-tech laboratory in the Olympics' history on Thursday, aiming to prevent any doping at the Games this summer.

The lab, provided by pharmaceutical firm GlaxoSmithKline (GSK), will operate 24 hours a day and carry out more tests than at any other previous Olympics, BBC News reported.

The gigantic high-security facility is roughly the size of seven tennis courts. It is located in Harlow, half an hour north of the Olympic Park in east London, and will be led independently by Professor David Cowan from the Drug Control Center at King's College London, Reuters reported.

"We are doing all we can to ensure that there is no place to hide for drugs cheats at London 2012," Britain's Sports and Olympics Minister Hugh Robertson told The Daily Mail. "Our message to any athlete thinking about doping is simple: we will catch you."

Trained scientists will process over 6,250 bottles of urine and blood arriving from the Games' various venues, performing about 400 doping tests each day.

The processes used at the laboratory will be able to detect around 240 illegal substances, according to Reuters.

One out of every two athletes will be tested for doping, as well as all of the medal winners, the Daily Mail reported.

London is the first Olympics to have its anti-doping program sponsored by a pharmaceutical company, Reuters reported. However, GSK played down any concerns that it represented a conflict of interest.

"Our involvement is the support and delivery of the facility; we have no role in the testing process," GSK chief executive Andrew Witty told reporters. "You can be 1,000 percent reassured that there's no overlap, no conflict."

GlaxoSmithKline has also entered into an agreement with the World Anti-Doping Agency (WADA) to share information on all their drugs, including products under development, BBC reported.