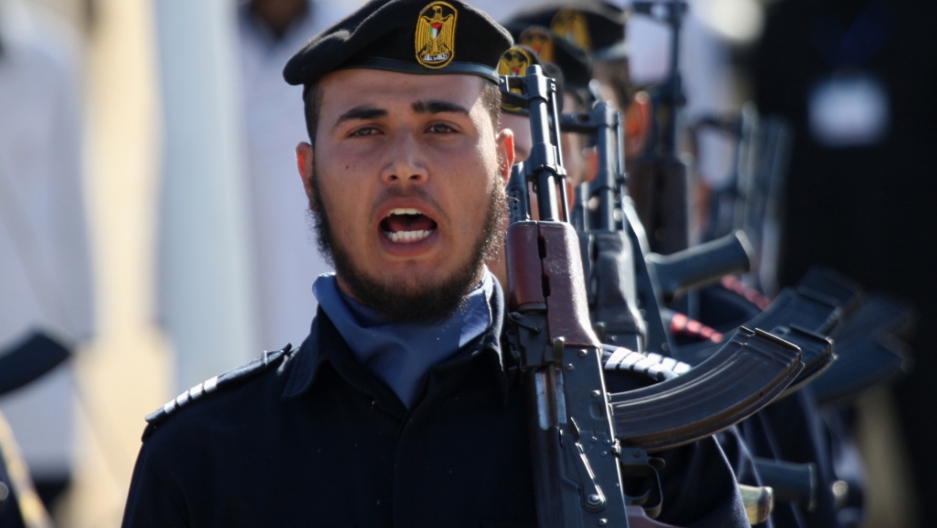 Hamas police officers march in formation during a ceremony in the Gaza Strip. The Hamas leadership outside Gaza may be leaving its headquarters in Damascus, Syria, in a move some say will anger Iran.
Credit: SAID KHATIB
Share

Hamas is on the move. Due to what they say is deteriorating security in the Syrian capital, Damascus, high-ranking Hamas officials are whisking their families away from their political headquarters to safer Arab cities.

At least two informed sources in the Gaza Strip, where the Islamist movement rules, say their Damascus offices have been entirely emptied and only the leadership-in-exile remains. They are just waiting for the right moment to make their move, as their Syrian government hosts grow more violent in their suppression of a months-long uprising, and which will likely raise eyebrows from Tel Aviv to DC and Tehran.

Where they will go is not yet known, but the region today is far more friendly than it was before last year's Arab uprisings. With fellow Islamist movements sweeping to power in places like Tunisia, and now, crucially, Egypt, Hamas feels more confident and less isolated than in previous years. Even a tiny state like Qatar - where Hamas is rumored to be establishing at least one of its new offices - is punching above its weight in the region as a new order is forged.

More from GlobalPost: Is Hamas pulling out of Syria?

But what of Iran, Hamas' most high-profile and provocative patron? Some reports have suggested (though without much sourcing) that the Shia-led Iranian government is less than pleased with the Hamas decision to vacate Damascus, whose Shia-affiliated Alawite regime enjoys close ties with Tehran.

"Hamas is influenced very much by Syria and Iran," Mkhaimar Abusaada, professor of political science at Gaza's Al-Azhar University, said before the Syrian uprising prompted Hamas to rethink its base. "I do not see Hamas making any major political decisions, like reconciliation [with its rival Fatah] without the approval of both Syria and Iran."

But Haaretz, an Israeli paper, says Iran has now threatened to cut funding to the movement, which the Council on Foreign Relations says amounts to between $20-$30 million each year.

Earlier this week, the Sunni Hamas police force is reported to have violently stormed a house where about a dozen Shiite worshippers were commemorating a holiday in Gaza, beating and arresting members of the congregation. (Hamas later denied being aware of any Shiites in the Sunni-majority strip).

While it's unclear whether the raid had anything to do with the movement's reported souring relations with Iran, it is hard to imagine Shiite worshippers being targeted as criminals if Iran was indeed still Hamas' benefactor.

In Gaza, one journalist would joke about how an Iranian flag stuck to his windshield helped him get through Hamas checkpoints without any hassle. That may no longer be the case.