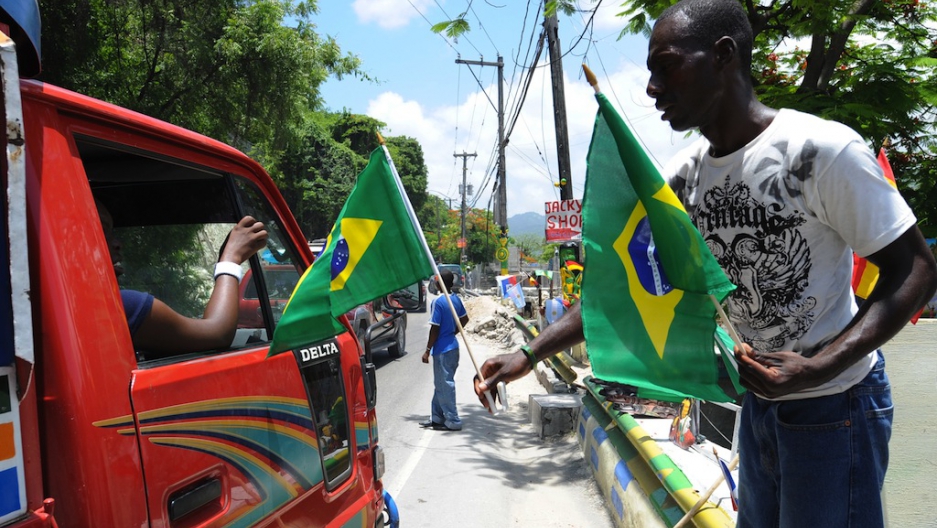 A Haitian man sells flags of Brazil, one of the countries taking part in the World Cup soccer in South Africa on June 10, 2010 in the streets of Petion-ville, Haiti.
Credit: Thony Belizaire
Share

She cries for her homeland, Haiti, devastated by the earthquake of January 2010.

She cries for her brother and sister who lost their lives in the disaster.

And she cries for her two children, aged 7 and 11, who she left behind in Port-au-Prince in an attempt to build a new life thousands of miles away in a corner of the globe she knew only from the crumpled pages of school text-books — the Brazilian Amazon.

Doris is one of thousands of Haitian earthquake refugees who have made this tough and unusual pilgrimage since catastrophe struck on Jan. 12, 2010.

“I miss them a lot,” says the 46-year-old saleswoman, sitting slack on the porch of a rickety wooden guesthouse in the tiny Brazilian border town of Brasileia. “It’s the first time I have ever been separated so long from my children.”

Brazil has long been a destination for migrant workers, both legal and illegal. Sao Paulo, its economic capital, is home to tens of thousands of Bolivians, many of whom toil day and night in back-street sweat-shops making clothes.

Between the start of last century and the 1960s, as many as 250,000 Japanese immigrants arrived, often fleeing rural poverty. Brazil is today said to house the largest Japanese population outside Japan, with around 2 million Brazilians claiming Asian descent in the last census.

But the sudden and unprecedented arrival of thousands of Haitians has triggered a nationwide debate on immigration and underlined the challenges Brazil has begun to face as its economy surges amid an ongoing commodity boom. As it grows, Brazil is increasingly viewed as an attractive destination for impoverished economic migrants from places as distant as West Africa and Bangladesh.

“After the earthquake in January 2010 a flow of Haitians began arriving in Brazil. We’d never had Haiti/ Brazil migration before,” said Paulo Sergio de Almeida, the president of Brazil's national immigration council. “It was the first time.”

According to official figures, as many as 4,000 Haitians have entered the Amazon region since the earthquake via small border towns such as Brasileia.

With their lives back home in tatters and Haiti’s fragile economy still struggling to find its feet two years after the earthquake, they come in search of work and a slice of the Brazilian boom.

“I've come here because of the economic problem,” says Doris, who sold shampoo before the magnitude-7.0 quake tore through her homeland. “We don't have anything — no jobs. All we could do was come here in search of a better future.”

Almeida, the council president, said the Brazilian military presence in Haiti had contributed to Brazil’s reputation as a welcoming, opportunity-filled country. Since 2004, the South American country has led the UN’s Minustah stabilization force there.

“Brazil has become very visible in the whole world and particularly in Haiti because of the Brazilian presence there. They realized that Brazil existed and that they could have a decent quality of life here and decided to come in search of better opportunities,” he said.

But the improbable and risk-strewn path to Brazil represents a major gamble, with the migrants shelling out thousands of dollars for travel packages which take them from the Dominican Republic, which shares the Caribbean island of Hispaniola with Haiti, to Panama and then on to Ecuador. From there they travel by bus through Peru and Bolivia before reaching the Brazilian border.

Once there, in tiny border towns such as Peru’s Inapari, they hire local coyotes to smuggle them through remote areas of forest into Brazil. Many are turned away by federal police and deported after days trekking, terrified and lost, through the jungle. Others make it to improvised shelters and cramped hotels where they await documents that will allow them to work.

Until the end of last year, the Brazilian media largely ignored the new arrivals from Haiti. Their prime destination, the Amazon’s Acre state, is so remote that some Brazilians joke it doesn’t actually exist. Journalists from major Brazilian news outlets rarely venture there.

“Amazonia is, as always, out of focus,” said Altino Machado, a respected local blogger who is based in Acre’s capital Rio Branco and has followed the plight of the Amazon’s Haitians since they started arriving in early 2010.

That has now changed. In December nearly all of Brazil’s major newspapers dispatched their reporters to the region after hundreds of Haitians arrived in the region in the space of just a few days, prompting warnings of a “humanitarian disaster.”

With the Haitians plastered across the front pages of Brazil’s biggest newspapers, the government was forced to react, announcing that it would close the border to visa-less Haitians, but would issue around 100 work visas per month back in Haiti.

The estimated 4,000 Haitians who have already made it into Brazil would all be granted work visas, authorities said, but future arrivals would be turned away.

But even for those who made it in before the borders closed, swapping the bustle of Port-au-Prince for the bucolic border towns of the Amazon, life has not proved easy.

“The Brazilian residents have been very tolerant,” said Machado. “The problem is in Bolivia. The guys [corrupt police officers and coyotes] are opening their back-packs and taking their shoes and clothes. If they find dollars, they take them too. They are demanding bribes. All kinds of extortion. And [we’ve heard] of attempted rapes of the women.”

Others are reported to have made softer landings in the region, finding jobs on major infrastructure projects such as the Jirau hydro-electric dam in the neighboring Amazon state of Rondonia, part of a government drive to meet ballooning energy demands as the country’s economy expands.

“The Haitian people came, rolled up their sleeves and sought out work. Today we see them going around with their beautiful smiles, riding newly-bought bicycles, talking on mobile phones and rebuilding their lives through opportunities that our marvelous land has offered them.”