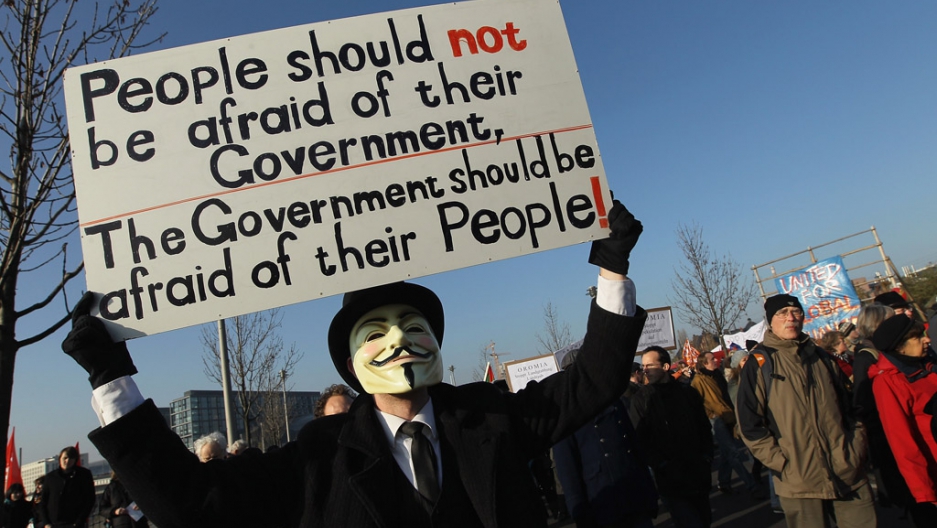 A man wearing an Anonymous mask joins demonstaters protesting against the world financial system during a march. Anonymous hackers claimed responsibility for shutting down the Department of Justice website among others on Thursday, in protest of the government's inditement of file-sharing site Megaupload.
Credit: Sean Gallup
Share

Hours after the US federal agents on Thursday arrested the leaders of and shut down Megaupload.com, a popular website for illegal file sharing, hackers collective Anonymous retaliated by shutting down the Department of Justice's website, CNN reported.

More from GlobalPost: Megaupload shut down by federal prosecutors

The Department of Justice told CNN that they were experiencing website trouble and could not pinpoint the source.

"One thing is certain: EXPECT US! #Megaupload" AnonOps tweeted shortly after the site began experiencing problems.

Anonymous also claimed credit for cyber attacks that knocked the websites of the Recording Industry of America, the Motion Picture Association of America, and Universal Music, Forbes reported. They overwhelmed those sites with junk traffic, which are called "denial of service" attacks.

Universal Music had been locked in a legal battle with Megaupload, according to CNN. Mega’s recently appointed CEO and rapper/producer Swizz Beatz had assembled celebrities including Kanye West, Will.i.am, and Alicia Keys to appear in a promo video for Megaupload, Universal issued a takedown notice to YouTube. YouTube removed the video, sparking a lawsuit from Mega, Forbes reported.

Authorities said Megaupload had generated more than $175 million in illegal profits through advertising revenue and the sale of premium memberships, CNN reported.

Megaupload, which launched in 2005, was once the 13th most visited website on the Internet.

More from GlobalPost: SOPA: Has the internet won?