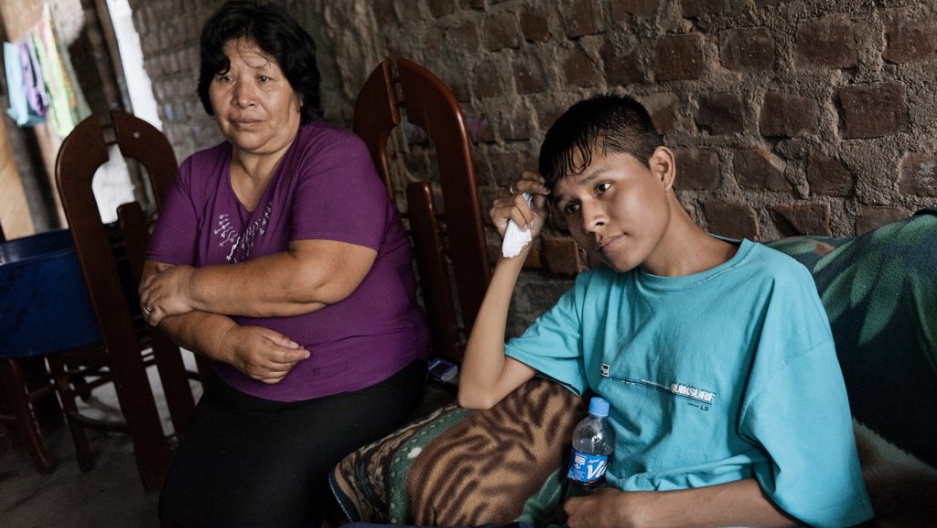 In Lima, Steven Castro Espinoza, 19, talks about taking his TB medicine as his mother, Eva Davita Espinoza Gomez, listens. Steven has multi-drug-resistant TB, as does one of his brothers. But Steven is taking medicine while his brother refuses, causing much fear in the house of the disease passing to others.
Credit: Riccardo Venturi
Share

LIMA, Peru — Stories about a dozen patients with “totally drug-resistant” tuberculosis in India have been reported around the world during the past week, setting off haggling among TB experts about whether these reports were true.

But most of the stories missed a more frightening reality, buried in a World Health Organization statement in response to the India reports: Overall, the world is treating drug-resistant TB extraordinarily poorly, and that creates more and more cases of resistant TB that aren’t being cured.

So whether the dozen people in India have a type of tuberculosis worthy of a new acronym — “TDR-TB” — there is no doubt that thousands of people with serious drug-resistant TB (including some who may be resistant to all drugs) aren’t getting treatment at all, or getting treatment that isn’t working.

The 13th paragraph of the WHO’s statement said that just one quarter of people with multi-drug-resistant TB (MDR-TB) in 2010 “were treated in accordance with recommended international guidelines.”

Then it adds this sobering bit: “Data (unpublished) collected by WHO show that just over a half of MDR-TB patients in recent cohorts completed their treatment successfully, and among patients with XDR-TB, death is more common than successful treatment.”

Just over half? In a group of patients that have a highly contagious disease passed by coughs and sneezes? It means nearly half of those with MDR-TB who took treatment did not complete it — and could be infecting people. And most people with XDR-TB, extensively drug-resistant TB, die.

So what are countries doing about these thousands of people with drug-resistant TB who are off treatment or receiving treatment that isn’t working? Peru is a good place to ask that question.

Over the last two months, I’ve been traveling with photographer Riccardo Venturi to three countries — the Philippines, Estonia, and Peru — at the invitation of the Japanese company Otsuka Pharmaceutical to look at the human impact of TB and what different innovations in treatment mean for patients. On this journey, during which we are acting independently, we met with local scientists, doctors and patients to explore the scope of the struggle to fight drug-resistant TB.

Here in Peru we also met with the leaders of the country’s TB control efforts, and they said they were studying the problem as part of a new multi-ministry effort to fight TB from many different angles. Peruvian President Ollanta Humala has made the TB fight a top priority.

Peru has a strong history at the forefront of the developing world in combatting TB. In the mid-1990s, for instance, many local TB experts, aided by the Massachusetts-based Partners in Health and its sister organization Socios En Salud, fought to start treating those with drug-resistant TB.

He pointed out that this is a problem throughout the developing world, as well as many capitals in the West; we also heard about this issue in Estonia and the Philippines. Officials in Peru, Estonia, and the Philippines have yet to decide how to isolate those who remain infectious with TB even though they are on treatment. Jave suggested putting patients in sanatoriums, providing their families with a financial stipend and giving the patients amenities such as Internet access so that they could keep in touch with their families.

What do families think about this?

We found a family in Lima in which one son with MDR-TB was on treatment and another son also with MDR-TB had stopped treatment.

The mother of the two young men, Eva Davita Espinoza Gomez, said she would welcome the placement of the son who is off of treatment in a sanatorium — at least until he got well.

“He has a drug problem,” she said. “He told me that if I take him to another city, away from his friends, he would go back on treatment. His friends are a bad influence. I want to get him out of here.”

Socios En Salud spent a few thousand dollars to construct separate bedrooms for the two young men with MDR-TB, but the untreated brother still could be infecting those in the community — as well as his family.

“I’m not happy about what he’s doing,” said Steven Castro Espinoza, 19, the brother who is taking his TB medicine, referring to his brother who is not. “He is contagious. He could be infecting our mother.”

Next: On the TB frontlines, a nurse who saved a young mother.