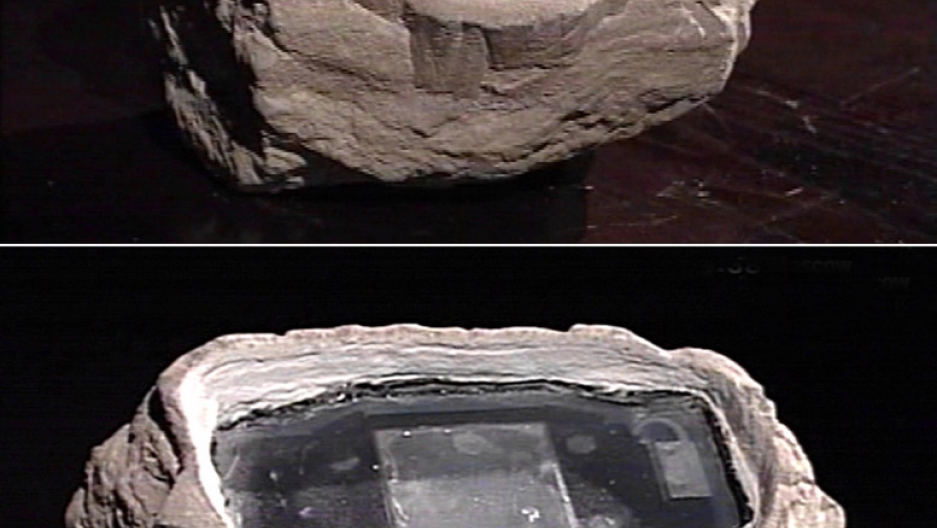 This image from Russian television shows electronic equipment concealed in a rock, which was claimed to be used by four British embassy staff members to receive intelligence information provided by Russian agents in a park outside Moscow.
Credit: Ren TV Press photo
Share

A fake rock planted in Moscow that held hidden electronic equipment was used by the British to spy on Russia for over 5 years, BBC News reported.

Russia first alleged that the UK was spying on them with the rock in 2006, but this is the first time a British official is admitting to the espionage.

"The spy rock was embarrassing, they had us bang to rights," Powell told the BBC. "Clearly they had known about it for some time and had been saving it up for a political purpose."

Hidden Russian television cameras first shot video of men handling the rock five years ago. The video was widely broadcast, along with footage showing the rock being taken apart to reveal the machinery inside, AFP reported.

However, Russia waited to admit publicly that it was in fact a British device.

Shortly after, Russia's security service, the FSB, alleged that Britain was making secret payments to pro-democracy and human rights groups in Russia. In response, prime minister Vladimir Putin, then the country's president, passed a law which restricted all foreign funding to NGOs.

"We have seen attempts by the secret services to make use of NGOs," Putin told the BBC. "NGOs have been financed through secret service channels. No-one can deny that this money stinks. This law has been adopted to stop foreign powers interfering in the internal affairs of the Russian Federation."

The law kicked off a diplomatic feud between the two nations, which have had a difficult relationship for years, especially regarding the poisoning of Kremlin critic Alexander Litvinenko in 2006 in London, the AFP reported. Britain suspects Andrei Lugovoi, a former FSB agent who is now a representative in Russia's parliament, of poisoning Litvinenko. Russia, however, refuses to extradite him, according to the AFP.

Tony Brenton, the British ambassador to Moscow at the time, said in a radio interview with the BBC on Thursday that the rock episode was “a considerable headache," The Los Angeles Times reported.

“It was unfortunate that one of the people involved was also dealing with our relations with Russian non-governmental organizations,” Brenton said. "All of our activities with the NGOs were completely above board.”

British Prime Minister David Cameron visited Moscow in September for the first time since the death of Litvinenko in an attempt to smooth over relations with Russia, AFP reported. Though the UK and Russia did not resolve their differences over Litvinenko's poisoning, they did seal trade deals worth more than $250 million.

Since the NGO funding law was passed, hundreds of Russian non-governmental organizations have been harassed, denied registration or shut down, Human Rights Watch told The Guardian. The climate of suspicion has intensified in the past month, as Putin battles to return to the presidency in March, according to The Guardian.

More from GlobalPost: Head of Russia's only political watchdog detained as elections begin