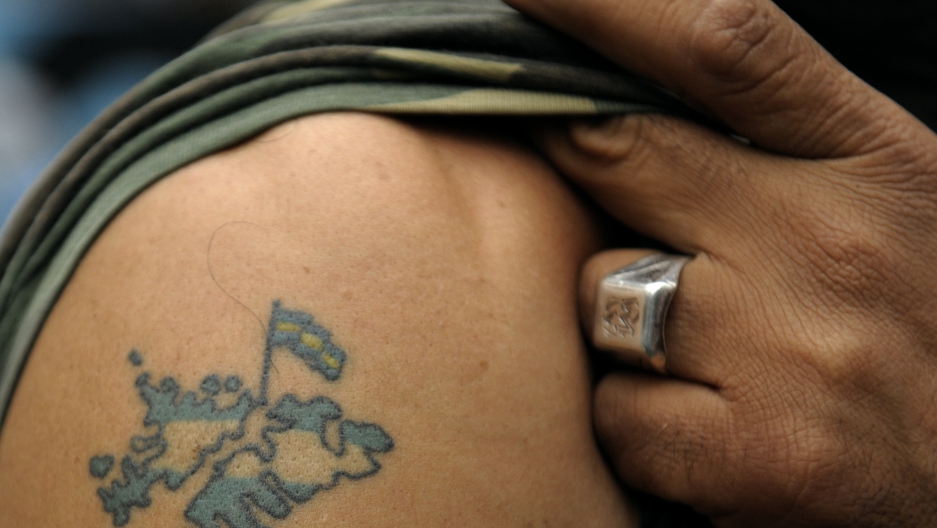 Argentine war veteran Victor Villagra shows his tattoo of the Islas Malvinas (Falkands Islands) during a demonstration near the British embassy in Buenos Aires on April 2, 2010 on the 28th anniversary of the 1982 conflict. JUAN MABROMATA/AFP/Getty Images
Credit: JUAN MABROMATA
Share

Just a few months ahead of the 30th anniversary of Britain's war with Argentina over Las Malvinas as they are known across Latin America, or the Falklands as much of the rest of the world knows them, the two countries are ramping up a war of words over the disputed territory.

It is not only the round-number anniversary that is sparking tensions between the two nations. British firms have begun carrying out deep-sea oil exploration around the islands, 300 miles off Argentina's coast, and there is excitement that large oilfields are about to be discovered.

On top of the financial capital to be made through ownership of the islands, there is much political capital on offer to both sides, as memories of the conflict resurface.

In Britain, Prince William, second in line to the throne, will be posted to the islands next month with the Royal Air Force. A recently released biopic about the life of then Prime Minister Margaret Thatcher will be another reminder to the Brits of the conflict which claimed nearly 1,000 lives, the majority Argentine.

In Argentina, around 80% of the population believe the islands rightfully belong to them. President Cristina Fernández de Kirchner is keen to play up to that majority. Last year, she described Britain as a "crass colonial power in decline."

Mercosur, an alliance of four Latin American nations, including Brazil, agreed last month to ban ships flying the Falklands flag from its members’ ports. British Foreign Secretary William Hague, on a visit to Brazil at the moment, faced criticism in Brasilia, for London's position.

Hague's counterpart in Brazil, Antonio Patriota, said all of Latin America "backs Argentine sovereignty over the Malvinas and backs the UN resolutions calling on the Argentine and British governments to hold talks on the issue."

Hague echoed his Prime Minister's comments, though watered them down a little. "We believe in the self-determination of the people of the Falkland Islands."