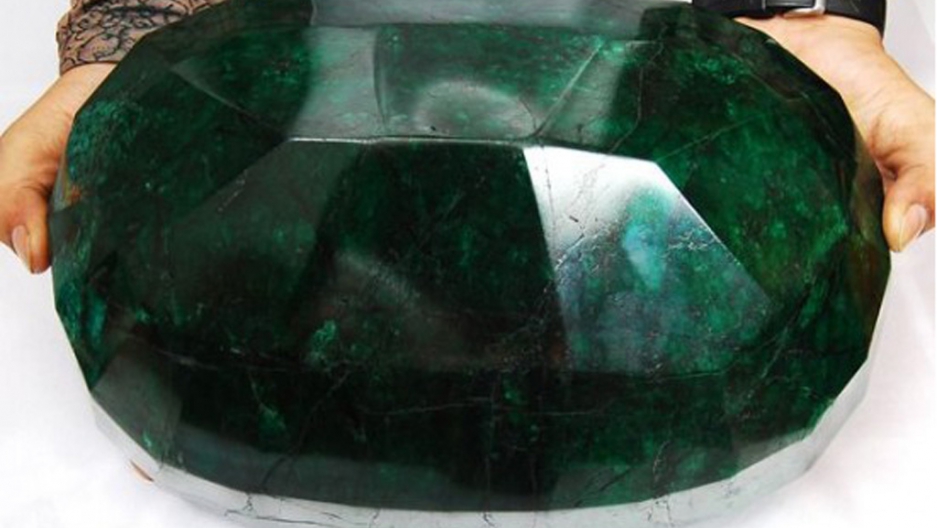 The world's biggest cut emerald weighs 25 pounds and is valued at $1.15 million. It's up for auction later this month in Canada.
Credit: Westernstarauctions.com
Share

KELOWNA, BC – Owners of the world’s largest cut emerald – a 57,500-carat natural wonder – will auction off the gem later this month, and the bidding starts at $1 million.

Regan Reaney, of Gems Canada in Calgary, said he’s already received interest from buyers in Houston and the Middle East.

“I’m still amazed every time I look at, pick it up, touch it. It is amazing,” Reaney told the National Post.

The gem – called Teodora, or gift of God, in Portuguese – was mined in Brazil and sold to an Indian buyer, but little is known of the stone’s origins.

The emerald will be sold at Western Star Auctions in Kelowna at the end of January. According to The Daily Courier in Kelowna, the auction house is hoping the gem will attract more than just bids.

"Having the world's largest emerald here right now and auctioning it off on Jan. 28 will attract a lot of attention and, hopefully, a TV show about what goes on at Western Star Auctions. Until we get the show, we'll continue selling huge gemstones in the meantime."

Jeff Nechka, owner of Premier Gems in Calgary, tested the authenticity of the Teodora emerald and appraised it at $1.15 million, reported the Toronto Sun.

“At first I was very skeptical,” said Nechka. “Anything this large occurring in nature is extremely rare.”

“It’s super rare,” said Reaney. “It’s almost in the form of priceless because the size of it.”

The rare gem weighs in at roughly 25 pounds.

"Obviously you can't make a piece of jewelry out of something this big," said Reaney. "Whoever buys it will probably put it on show in their home or a museum or try to resell it for more.”

The Teodora emerald will be displayed at Western Star Auctions in Kelowna until the Jan. 28 auction.