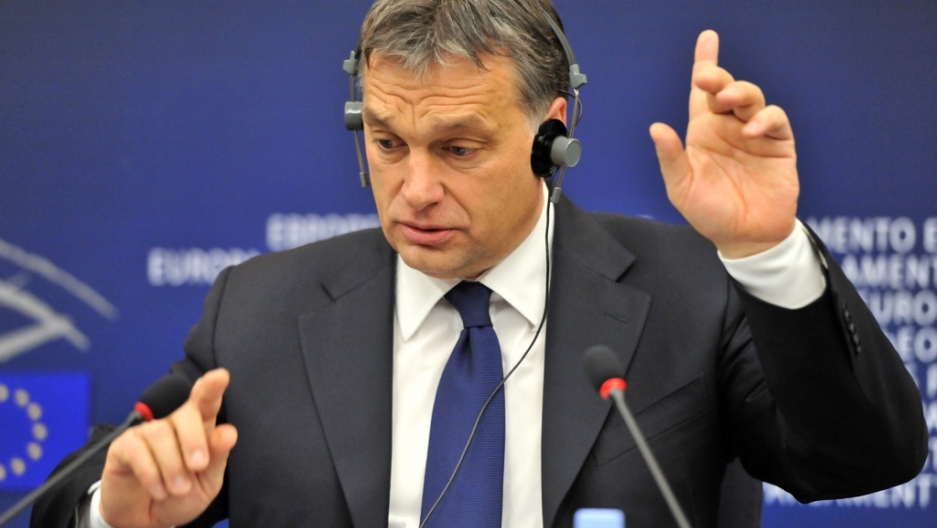 One member called likened him to Hugo Chavez and Fidel Castro, while another talked of the Putin of the Puszta – a reference to the grassland plain of eastern Hungary.

More from GlobalPost: Why the EU needs to talk about Viktor

Orban traveled to the parliament Strasbourg, France, to answer his critics in the European Union. He shrugged of the concern that his government risks sliding toward authoritarianism through new laws restricting the independence of the media, judiciary and central bank.

“What’s happening in our country is a very exciting process of renewal,” he told the parliament. He hailed his government’s “proud record” in wiping away constitutional vestiges of the Communist regime he helped topple in 1989 and in dealing with an economic mess left by the previous Socialist government.

Responding to the launch of legal action against some of the new laws by the EU’s head office this week, Orban suggested they were minor, technical issues that can “easily and swiftly be resolved.”

Orban found some support in the 754 seat EU parliament.

Many in the center-right Christian Democratic faction to which his Fidesz party belongs offered understanding and called for a sober analysis of Hungary’s laws before any talk of EU sanctions. The most ringing endorsements came however from the parliament’s nationalistic fringes.

“The problem is not Hungary, the problem is the European Union,” said Krisztina Morvai of Hungary’s far-right Jobbik party, a rival of Orban who wants Hungary to pull out of the EU.

“Carry on as you are at the moment,” added Mario Borghezio, of Italy’s Northern League. He offered Orban a warm welcome in Padania – the northern region which he would like to see independent from Italy.

From the Socialist, Liberal and Green factions, criticism was relentless.

“You are going in the direction of Mr. Chavez and Mr. Castro and all those authoritarian government’s,” said Daniel Cohn-Bendit, who co-leads the Green group in the parliament.

Regardless of the verbal fireworks, Orban indicated he may be prepared to tweak his judiciary and central bank laws in order to avoid the possibility of EU fines.

However, the EU’s complaints are widening. He received a fresh letter of inquiry from the European Commission Tuesday over media freedom, while the EU’s Home Affairs Commission blogged that several members of the EU’s executive body are pressing for action against Hungary for violating fundamental values — which could lead to an unprecedented suspension of the country’s voting rights within the EU.

Orban’s most pressing problem however is getting EU and IMF support for a $25 billion fund to backstop Hungary’s floundering economy.