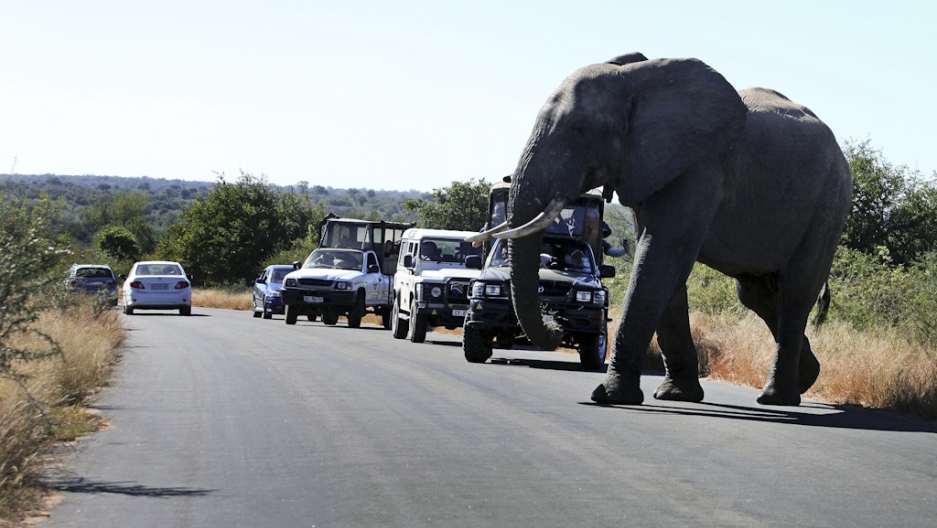 An elephant crosses the road at South Africa's Kruger National Park, one of Africa's top safari destinations. A number of roads and entrance gates at the park were closed Jan. 18, 2012, because of flooding that also caused the evacuation of a tourist lodge.
Credit: PABALLO THEKISO
Share

Kruger park officials issued an urgent warning that gates and roads had been closed because of heavy rainfall. January is a summer month in southern Africa, and the height of the rainy season.

As of Thursday, 70 park visitors and 10 park staff have been evacuated from the park, officials said.

"Guests are urged to exercise caution around rivers as crocodiles are likely to be in flat areas," an advisory said.

A park spokesman told South Africa's Times newspaper that six tourists on a game-viewing drive had to be airlifted by helicopter after getting stuck at a picnic site. Members of the group were treated for minor injuries.

About 30 people were reportedly rescued from a camp site in Lower Sabie, while a private game lodge at the park, Phinda, was also said to be under water and was evacuated.

Kruger park is one of the main safari destinations in Africa; nearly 1.5 million people visit it every year.

Just outside the park, in the area around Hoedspruit, flooding left residents stranded, and nearly 150 people were rescued by helicopter from the roofs of their homes. In the Bushbuck ridge area, also near the park, 600 students trapped by the floods were rescued from their schools.

Parts of Kruger park received between 5 and 10 inches of rainfall in 48 hours, according to the South African Weather Service.

The official park warning said the Tinga Private Lodge was being evacuated, and guests on the Sweni Wilderness Trail were also taken to safety.

Two main camps, Olifants and Letaba, were unaccessible because of flooding on roads and causeways. Skukuza, the biggest camp at the park, was also reportedly cut off from road access.

A number of entrance gates to the park, including Crocodile Bridge in the south, have been closed.

Kruger National Park is a massive game reserve in northern South Africa, covering an area the size of Wales and bordering Zimbabwe and Mozambique.

Flooding has also been reported in neighboring Mozambique, where nearly 500 homes were flooded in low-lying areas of the capital, Maputo, after a tropical depression brought on rains and high winds.

The SA Weather Service has warned South Africans to brace themselves for "strange weather" in the next few months, including heavy flooding in February.