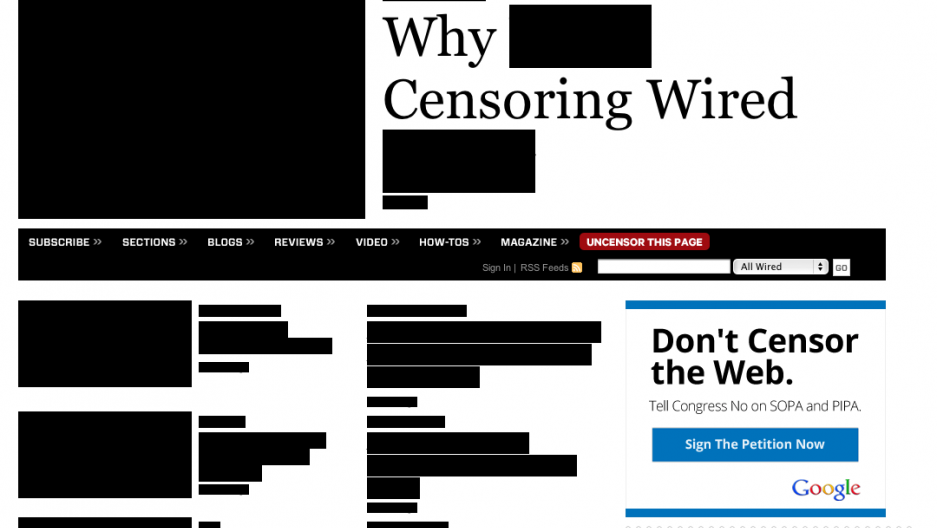 While Wired magazine, pictured, and Wikipedia are getting publicity for their opposition to SOPA and PIPA, there are many who are in favor. (Screenshot of Wired.com.)

While today is mostly about the groups, companies and individuals who are opposed to SOPA and PIPA, there are many, powerful and powerless alike, who stand behind the bills and say they're necessary to protect creativity in America.

The supporters are largely creatives — inventors, scientists, actors and songwriters — because the goal of SOPA/PIPA supporters, they say, is to stop foreign companies and individuals from ripping off American creativity, and doing so in places beyond the reach of American laws. And while rank-and-file actors and actresses often support it, they have powerful support from some of the largest and most powerful companies in America. Pfizer, Time Warner, News Corp., Sony Entertainment and other large pharmaceutical, Hollywood and recording industry companies all support the bill as well.

Scott Harbinson, the international representative of the International Alliance of Theatrical and Stage, said these bills will save jobs.

"There's not going to be the level of reinvestment, particularly in the low-budget motion picture industry, if what happens is the end product is stolen and monetized by foreign entities abroad, beyond the reach of U.S. law enforcement," he said. "Who's going to lend independent filmmakers the money to make their product if the only certainty is that a good portion of their investment is going to be eroded by piracy."

Steve Tepp, chief intellectual property counsel at the U.S. Chamber of Commerce, said America's most innovative and creative products are being stolen by foreign criminals and these laws seek to address that."

"They're laughing all the way to the bank," Tepp said. "In the meantime, the products they're selling back into the U.S. market are fakes, they're dangerously defective in many cases. It's not just music and movies we hear so much about. It's everyday consumer products. Medicine, automobile parts, clothing, shoes, you name it."

It's worth noting that critics say SOPA and PIPA will do little to actually stop piracy, and they liken this effort to punishing automakers because cars are used in crimes. They say it's overly broad.

But Tepp disagrees. He said the legislation is actually narrowly crafted.

"The Internet is the best marketplace that the world has ever seen," he said. "No one wants to interfere with that. We think the Internet is stronger when these criminals...are disconnected or at least disrupted."

Tepp said the legislation is narrowly targeted at the "worst of the worst, foreign sites."

He said it's mystifying that Wikipedia is going ahead with their protest, after both bills' sponsors agreed to major rollbacks of the most controversial provisions.

Tepp said he's open to even more changes in the bill, which seem to be what many, including Google, want.

"The Chamber is looking for an effective, commercially reasonable solution," he said.