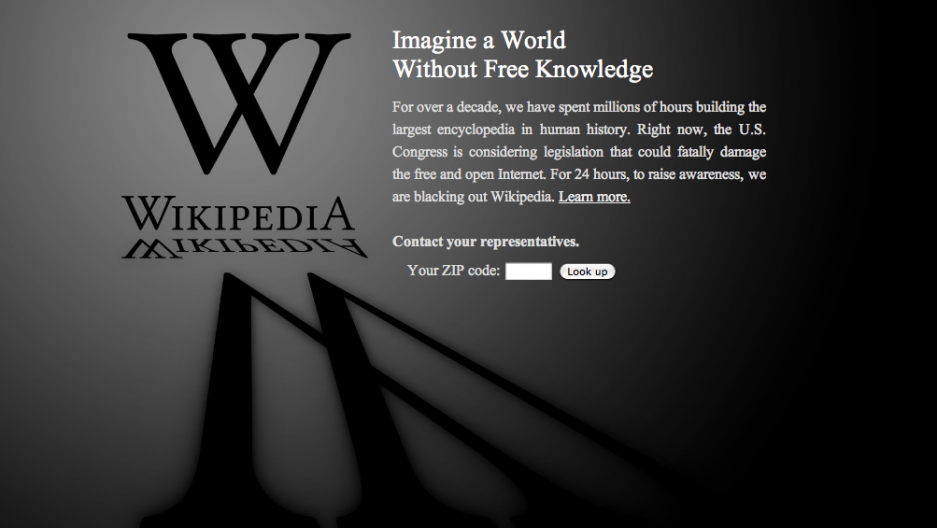 Wikipedia is only one of thousands of websites that have gone dark to protest SOPA.
Share

The Wednesday blackout protests by SOPA and PIPA protesters have been the latest pressure against lawmakers to stop the anti-web piracy bills – and it seems to be working.

Florida Sen. Marco Rubio announced Wednesday morning he will no longer support the Protect Intellectual Property Act (PIPA) he once co-sponsored, the New York Times reported.  “I have decided to withdraw my support for the Protect IP Act,” Rubio said in a Facebook statement.

Texas Sen. John Cornyn shortly afterwards urged Congress to take more time to assess the the measure slated for a vote next week.

Two separate bills, the Stop Online Piracy Act (SOPA) and PIPA, have garnered a maelstrom of debate from free speech activists and internet companies pitted against major backers of the bills, which include the Motion Picture Association of America, the Recording Industry Association of America and NewsCorp.

Cornyn made the statement on Facebook regarding the SOPA bill: “Better to get this done right rather than fast and wrong. Stealing content is theft, plain and simple, but concerns about unintended damage to the internet and innovation in the tech sector require a more thoughtful balance, which will take more time.”

Google, Wikipedia and Reddit, among thousands of other websites, have protested against the passage of the bills ranging from partial blackouts of their services to messages on their homepage that evoke a call-to-arms.

Rubio also urged Sen. Harry Reid to not rush the bill and bring the cloture vote he promised to bring on Jan. 24.

“I encourage Senator Reid to abandon his plan to rush the bill to the floor,” Rubio wrote. “Instead, we should take more time to address the concerns raised by all sides, and come up with new legislation that addresses Internet piracy while protecting free and open access to the Internet.”

Senators Jim DeMint (R-S.C.) and Robert Menendez (D-N.J.) have also have criticized the bills and a number of lawmakers have taken to social media to address SOPA and PIPA concerns.

"I strongly oppose sanctioning Americans’ right to free speech in any medium, including over the internet," Missouri Sen. Roy Blunt tweeted.

Kentucky Sen. Rand Paul also tweeted: "I oppose SOPA & PIPA have pledged to filibuster and do everything I can to stop gov't censorship of the Internet."

The White House released a statement over the weekend saying they oppose the direction of where the bills were headed, but stopped short of explicitly taking a position.

There are currently 80 SOPA and PIPA supporters from Congress and 31 who opppose, ProPublic reported.

There were signs of an uphill battle for SOPA and PIPA even before the mass online protests catapulted the anti-piracy bills into the foray.

The SOPA and PIPA debate reached a more conciliatory note this week when senators and leaders from the MPAA and US Chamber of Commerce stressed the need for better dialogue between the tech and content industries.

"Despite all of my best efforts, the past year has been dominated by really a bitter war between Silicon Valley and the content industry," said Paul Brigner, senior vice president and chief technology policy officer of MPAA. "And it’s a shame, because a lot of it has been fueled, I think, by misinformation and exaggeration about what the MPAA and others were trying to accomplish with this legislation."

But with SOPA's lead backer and House Judiciary Committee chairman, Lamar Smith (R-Texas), not backing down, the anti-piracy bills are not totally dead.

“It’s easy to engage in fear-mongering and it’s easy to raise straw men and red herrings, but if they read the bill they will be reassured,” Smith told the Wall Street Journal Wednesday.