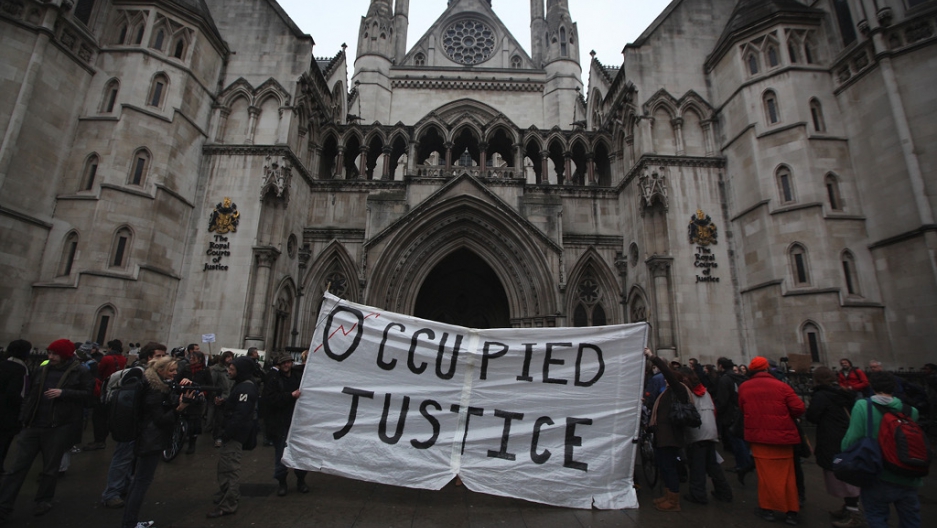 outside The High Court on January 18, 2012 in London, England. The City of London Corporation have won their legal bid to have the Occupy London movement removed from the pavements outside St Paul's Cathedral.
Credit: Peter Macdiarmid
Share

The Occupy tents went up in October and their presence was immediately controversial. The City of London Corporation, the local government authority for the City (London's financial district where St. Paul's is located) sought to have the camp removed.

Delays in judgment were granted after the Church of England reversed itself and said it would not join in the Corporation's suit. But today, the inevitable judgment ordering the Occupy eviction was made.

Mr. Justice Lindblom read out his reasons to a packed courtroom for ordering the camp's dispersal:

"The factors for granting relief in this case easily outweigh the factors against. The extent and duration of the obstruction of the highway, and the public nuisance inherent in that obstruction, would itself warrant making an order for possession and granting injunctive and declaratory relief," the judge said.

Lindblom also alluded to European law. "So too would the effect of the camp on the Article 9 of the European convention on human rights, providing a right to freedom of thought, conscience and religion."

The judge felt the human rights of worshippers in the cathedral to freedom of religion would be effected by the camp's continued existence.

There is something of an irony here since euro-skeptic conservatives in Britain hate the European convention on human rights and see it as a gross interference in British jurisprudence. It is one of the main reasons they argue Britain should leave the EU.

In any case, the City of London has asked that the tents be removed immediately. No word yet on whether the Occupy movement's lawyers will appeal.

The Guardian is live-blogging here.