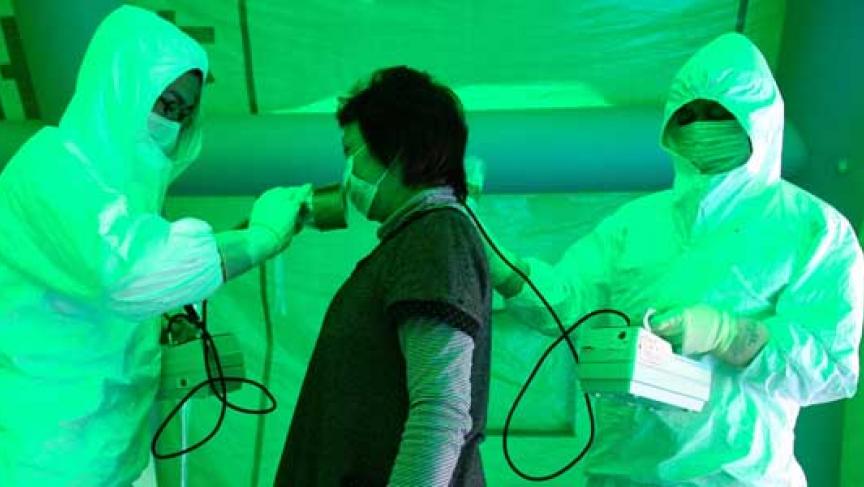 Japanese medical personnel check a woman evacuated from her home near the Fukushima 1 nuclear plant for radiation exposure in Japan. (Photo: Asahi Shimbun/epa/Corbis)

Share
By Miles O'Brien Koji Minoura is a paleontologist — he studies fossils and rocks — but he's become something of a celebrity in Japan, for an unfortunate reason. Long before last year's massive earthquake and tsunami, Minoura had warned that just such a disaster was in the offing. Minoura works at Tohoku University, in Sendai. Sitting in his cramped office, where all of the books fell off his shelves during the earthquake, he explains that the scientific work that made him famous began with the study of historical documents. He was intrigued by an ancient poem. It refers with sadness to "the famed waves of Sue-No-Matsuyama." Minoura wondered if the poem referred to an ancient earthquake and tsunami. So he dug through old records and found that in July of 869 AD a huge quake and tsunami hit Northeast Japan. It's known as the Jogan event. "The record shows the tsunami hit the area and killed more than a thousand people," he says. "But people quickly forgot about the tsunami." Minoura decided to look for geological evidence of that ancient disaster. In the late 1980s, he visited the area around Sendai and dug into a rice paddy to see what the tsunami might have left behind. He found what he was looking for — a layer of ocean sediment clearly visible in bright contrast to the rest of the gray-black dirt. "This is the trace of the tsunami," he says, displaying a photograph. "My age measurement showed that this is the sediment from the 869 Jogan tsunami." The ocean water had reached two and a half miles inland. Minoura's research didn't stop there. He dug deeper into the soil and found more marine layers — proof of similar giant tsunamis every thousand years or so, meaning Northeast Japan was overdue for another one. Over the next 20 years, Minoura would publish his findings in major scientific journals. Yet Japan was ill prepared for the massive tsunami that struck on March 11, 2011. The Fukushima Daiichi nuclear power plant was swamped by the waves, causing a nuclear disaster. Hiro Hasegawa, a spokesman for the Tokyo Electric Power Company, which owns the plant, says the company was aware of Minoura's research and considered making modifications to protect the plant. "We were in the process of considering that," he says, "but this accident occurred during that process." Paleontologist Koji Minoura believes his warnings were not taken seriously. "I regret it, but no one paid attention to my thesis," he says. Since the tsunami, people have paid attention to Minoura. Bloggers have picked up on his work. The Japanese news media have covered it extensively. Minoura now has the attention of the government and is regularly invited to speak before important groups. "Yes," Minoura says, acknowledging the attention. "But it's too late."