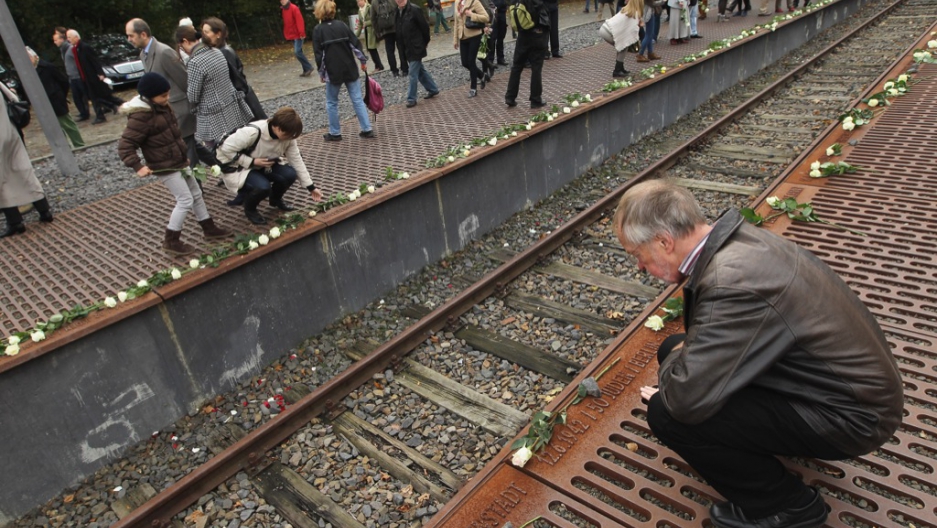 People arrive to lay roses at the Gleis 17 (Track 17) memorial on the 70th anniversary of the deportation of Jews from Berlin to concentration camps during World War II on Oct. 18, 2011 in Berlin, Germany. On Oct. 18, 1941, the Nazis began deporting Jewish residents of Berlin by rail to concentration camps, including to Theresienstadt and later to Auschwitz. Track 17, the original platform from which many Jews were crowded into freight cars for deportation, lists the dates, origins, destinations and numbers of Jews transported.
Credit: Sean Gallup
Share

BERLIN — Before the Nazis fled Auschwitz in January 1945, they destroyed most of the incriminating documents relating to their operation of the death camp, in which over a million people perished.

Yet, it now seems a small number of surviving documents may have resurfaced — only to disappear again.

According to Polish media reports, two unidentified Germans located three crates in south-western Poland containing documents relating to the former death camp, and then smuggled them out of the country.

The news has led the Auschwitz Museum to file a criminal complaint with Polish prosecutors and the Institute of National Remembrance - Commission for the Prosecution of Crimes against the Polish Nation (IPN), which is responsible for investigating crimes related to the Nazi occupation of the country.

“There are several laws regarding archives, regarding historical items, that were violated,” Auschwitz Museum spokesman Pawel Sawicki told GlobalPost. “That is why we informed the Prosecutors office and the IPN.”

The museum took the step on Monday after Polish media reported that a Pole named as Mieczyslaw Bojko had helped the Germans find the crates near Przelecz Kowarska, a village near the German border. The crates were reported to contain military service records and over 100 personnel files.

Austrian newspaper Der Standard reports that Bojko, a collector of items from the Nazi occupation period, had received 5,000 euros ($6,365) for helping the Germans find the crates. The unidentified Germans, who are said to have come from the Black Forest region, were reported to have precise information about the location of the documents.

Sawicki says that while it remains to be seen if the story is accurate, the museum had a legal obligation to pursue the matter.

“We have many maybes. No one knows what was in the crates, whether the crates were in fact there,” he said. “But we as the state institution that takes care of the archives and protects the history of the site of Auschwitz, we were legally obliged when we heard something like that to inform the proper institutions.”

If the documents are indeed genuine and can be recovered, they could be of great significance, both legally and historically.

The IPN, which was established in 1998, could possibly use the files in its ongoing investigations. One of its roles is to investigate crimes perpetrated by the Nazi and Communist regimes that took place on Polish soil.

“The investigation has been launched,” IPN spokesman Andrzej Arseniuk confirmed to GlobalPost. “Right now the prosecutors are looking into the case which has just been made public a day ago so we don’t have any information that we can provide so far.”

The Nazis murdered over 1.1 million people in the concentration camps of Auschwitz-Birkenau between 1940 and 1945, the vast majority of whom were Jews. The other victims were mostly non-Jewish Poles, Roma and Soviet prisoners of war.

Only around 10 percent of the estimated 8,000-9,000 members of the SS who operated the camp were ever prosecuted after World War II.

As well as providing evidence in the ongoing investigation into these crimes, any new documentation would be a vital addition to the museum’s archives. “In our archive today we have approximately 10-15 percent of the original documentation. So any original document has very important value,” Sawicki said.

“They can give us insight into the world of the perpetrators,” Sawicki explained. “We try to teach, of course, the history of the victims but a very important educational question is also why the perpetrators did it.”