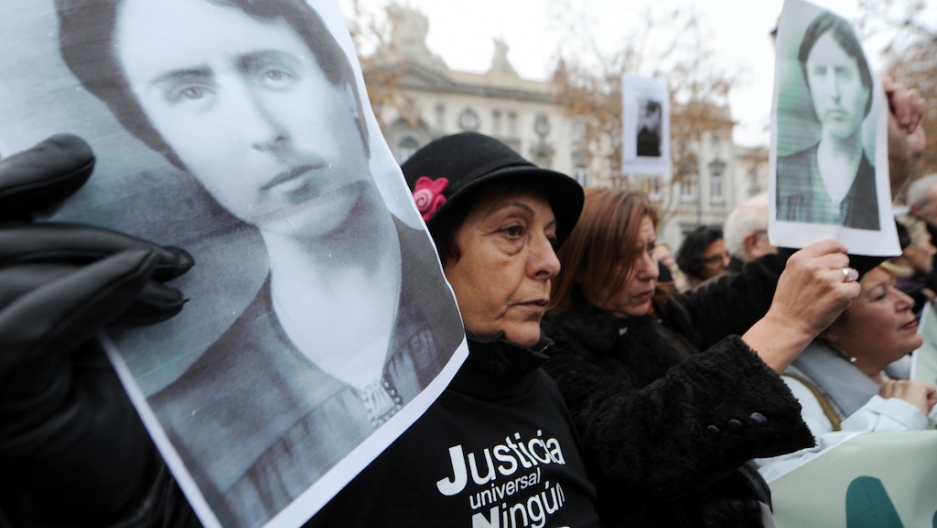 Protesters hold pictures of deceased relatives during Spain's 1936-39 civil war during a demonstration in support of Spanish Judge Baltasar Garzon on January 13, 2012 in Madrid. In May last year Garzon was suspended from his job pending trial for abuse of power after he opened a probe into the disappearance of tens of thousands of people during Spain's 1936-39 civil war and General Francisco Franco's subsequent right-wing dictatorship.
Credit: Dominique Faget
Share

LIMA, Peru – An Argentine judge has opened a criminal investigation into human-rights violations committed in Spain during the 1936-1975 Franco dictatorship.

Maria Servini de Cubria, a federal judge in Buenos Aires province, has launched the case based on a complaint lodged by lawyers from both countries representing several Spanish human-rights groups including the Association for the Recovery of Historical Memory (ARMH by its Spanish initials).

The case marks a novel reverse of fortunes. Spanish prosecutors have in recent years pursued human-rights abusers from several of Latin America’s military regimes of the 1970s and 1980s, including Argentina.

The climax of that process — at least so far — was the 1998 arrest of Chile’s former strong man, General Augusto Pinochet, in a private London clinic as he recovered from surgery on a hernia.

Carlos Slepoy, an Argentine human-rights lawyer practicing in Madrid and working closely with the ARMH told GlobalPost that the aim of the complaint was for a similar fate to befall the surviving members of the Franco regime.

Unlike many other countries transitioning from authoritarian or repressive regimes to democracy, including Chile, Argentina, Peru and Guatemala, Spain never held truth and reconciliation hearings.

Nor were there any prosecutions for human-rights violations, and in 1977, the country passed a general amnesty covering the Franco period and the preceding civil war, during which 113,000 disappeared or were killed, many buried in unmarked mass graves.

Separately, an estimated 30,000 children were taken from their parents, often socialist or communist opponents of the Franco regime.

Now, the ARMH and others argue that that amnesty is illegal under modern international human rights legislation. They also cite the fact that crimes against humanity have no statute of limitations and are subject to universal jurisdiction, meaning they can be tried anywhere provided it can be shown that the affected c ountry has failed to adequately investigate the alleged crimes.

In the case of Spain, the only investigation to date was launched by Baltasar Garzon, the crusading judge behind Pinochet’s unprecedented arrest.

More from GlobalPost: Trying the dead generalisimo for murder

But Garzon is now suspended and under investigation precisely for daring to attempt to delve into the abuses committed by the Franco regime, thus upsetting the delicate political equilibrium behind the country’s highly successful democratic transition.

“There has been terrible impunity in Spain,” Slepoy added. “There have been thousands of children stolen from their parents and who have never even retrieved their identity, discovered who they really are. This case is long overdue.”

The ball now appears to be in the court of Judge Servini de Cubria.

She is now reviewing documentation supplied to her from Spain, including regarding Manuel Fraga, 89, the former member of the Franco cabinet who subsequently served as deputy prime minister and is widely viewed as a key figure in the democratic transition.