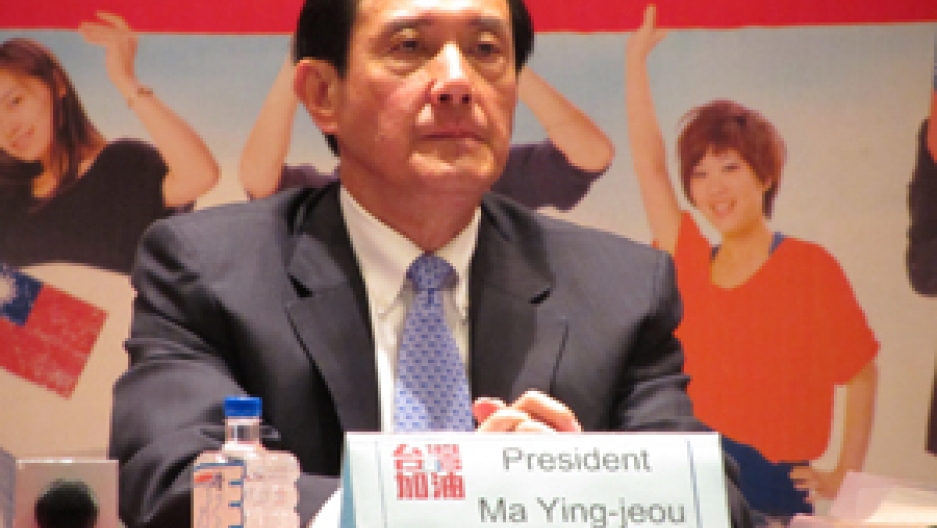 Ma Ying-jeou was re-elected as the president of Taiwan. (Photo: Mary Kay Magistad)

Share
Taiwan has just re-elected its incumbent president, Ma Ying-jeou, a proponent of closer economic ties with China. But now, as President Ma begins his second-term, some expect China to start ratcheting up pressure to build stronger political ties, and move Taiwan closer to reunification with China. An early sign of that came in a post-election statement from Beijing. An anchor on China's state-run television read a summary: "The Mainland is willing to join hands with the people of Taiwan from all walks of life, as they break new ground in peaceful development in cross-straits relations." Then came the kicker. "This is on the basis of continuing to oppose Taiwan independence, and sticking to the 1992 consensus." The 1992 consensus really wasn't a consensus. Beijing sees it as an agreement with Taiwan that there is one China, and it's the People's Republic of China, the PRC, with Taiwan as its province. Taipei sees the agreement as the two sides agree to disagree on what "one China" means. For many Taiwanese, it's a divided China, which may or may not ever reunite. Actually, these days, a majority of Taiwanese identify themselves as Taiwanese, rather than Chinese, and don't want to move toward reunification any time soon, and there are signs China's getting impatient with that. "China suffers from the rising challenger's disease," said Denny Roy, a senior fellow at the East-West Center in Hawaii, who was in Taiwan for the elections. Roy was referring to how China is increasingly challenging the United States and the status quo in their balance of power — especially related to Taiwan. He said China went easy on President Ma for a couple of years — increasing trade, improving ties, making no threats, and saying it could be patient. "In short order," Roy said, "we started hearing about debates breaking out among Chinese elites about whether China's policy was being too tolerant toward Taiwan, allowing Taiwan to take advantage of the concessions China was offering without offering anything in return to the Chinese, the benefits the Chinese wanted, the political benefits." By that he means, political benefits that would draw Taiwan inextricably into Mainland China's orbit, as increasing economic dependence already has. Last October, Ma raised the possibility of a peace accord with China. It created an uproar in Taiwan. So he backed off and said he'd never do such a thing without a referendum. His re-election won't change that, he said this weekend. "That doesn't mean I will go even faster," Ma said, after his victory this weekend. "I will control the pace to make sure people can support it." Good thing, too, because while Ma won a majority, it was a much smaller majority than last time. The opposition Democratic Progressive Party got almost 46 percent of the vote, which could be a useful thing for Ma to point out to China's leaders, if they pressure him for more concessions. Push too much, he could say, and you risk having a DPP president next time around. The DPP tends to favor a separate Taiwan identity. The question is whether that's enough incentive for China to stay patient. Denny Roy of the East-West Center said there's one thing Beijing is increasingly impatient about — US arms sales to Taiwan. "Arms sales remain an impending train wreck," Roy said. "The Ma Ying-jeou position, that arms sales contribute to peaceful cross-strait relations, is the exact opposite of the PRC position, that arms sales contribute to tensions across the Taiwan Strait. One must assume that there's a limit to Chinese tolerance of that contradiction." Roy added that the strength of the US commitment to Taiwan seems — unofficially — to be ebbing. At the same time, China is fast building up its military capability for, among other things, taking control of a populated island like Taiwan. But that's not really how China's leaders want to play it. They're also doing outreach to ordinary Taiwanese people, offering scholarships and cultural events. They'd rather seduce than overpower – far less messy, far less costly. But the suitor seems to be getting tired of waiting, and many Taiwanese wonder whether President Ma has the strength to hold out, and the canniness to keep China playing a softer game.