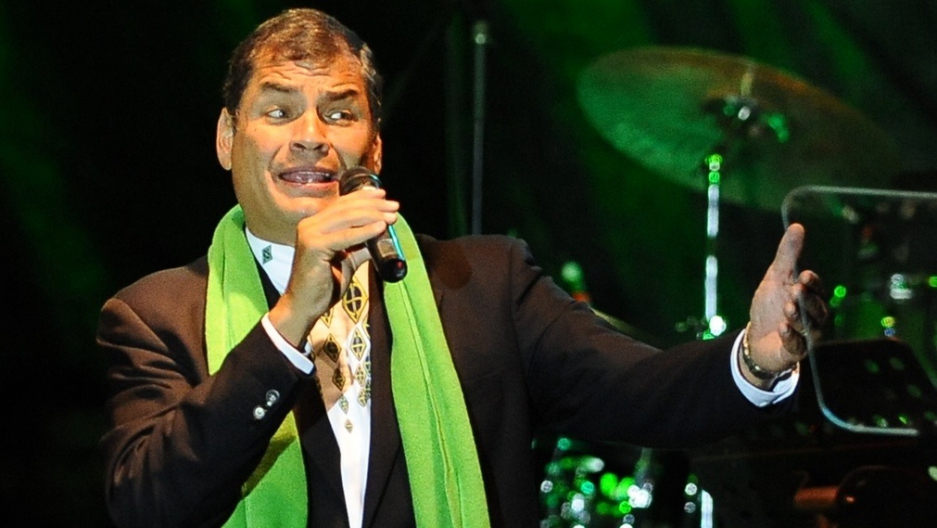 The president at his party.
Credit: RODRIGO BUENDIA
Share

“The greatest legacy of the revolution is not roads, schools, hospitals,” he told a cheering crowd in a soccer stadium in Cuenca, in the southwest of the country.
“It is the awakening of our inner strength, of our will for change and victory. Nothing and nobody will stop us.”

Since taking office in 2007, the 48-year-old economist has overseen radical reforms in everything from Ecuador’s constitution to its economic policies, sparking both a groundswell of popular support and violent opposition.

That opposition has included a chaotic incident in 2010, in which the burly, charismatic president was briefly taken hostage by mutinous police, and which ended in a bloody shoot out with loyal troops who rescued him.

At the time, Correa was memorably captured on TV challenging the rebellious officers to kill him “if you have the guts."

The president subsequently described the incident as an attempted coup and it has become the focus of his hugely controversial battle with the Ecuadorian media.

He recently won a criminal libel suit against the newspaper El Universo which described him as a “dictator” and appeared to condone his attempted overthrow. The editors and author were ordered to pay $40 million in damages and sentenced to three years in jail, prompting fierce criticism from international journalism and human rights groups.

He has brought continuity to what was previously one of South America’s most unstable nations, with his three presidential predecessors all overthrown amid turmoil.

During his first years in power, it often seemed touch and go whether Correa, educated in Belgium and the US, would share their fate. But he boldly faced down and outmaneuvered the right-wing opposition while also reengineering Ecuador’s economy to favor the country’s poor.

At one stage, he declared the national debt “illegitimate” as it had been contracted by corrupt and unaccountable regimes which did not represent the Ecuadorian electorate. After threatening to take the creditors to international courts, Correa successfully renegotiated the debt.

In another flagship policy, Correa has attempted to move Ecuador away from its heavy dependence on oil exports. He has offered to leave the massive ITT oil reserves — under the Yasuni nature reserve in a part of the Amazon that is home to uncontacted indigenous groups — underground in return for international pledges of billions of dollars equivalent to roughly half the crude’s market value.

Now, three years later and with just a fraction of that amount raised, the president has suggested that it may be “an idea ahead of its time,” prompting the ire of worried environmentalists.

But despite it all, Correa appears well-positioned for presidential elections next year. His latest approval rating was 55 percent, with 39 percent disapproving of his presidency. Meanwhile, the opposition is fragmented and without a clear, strong candidate.

Correa has yet to say whether he will run again. But neither his supporters nor opponents expect him to retire from Ecuadorian politics any time soon.