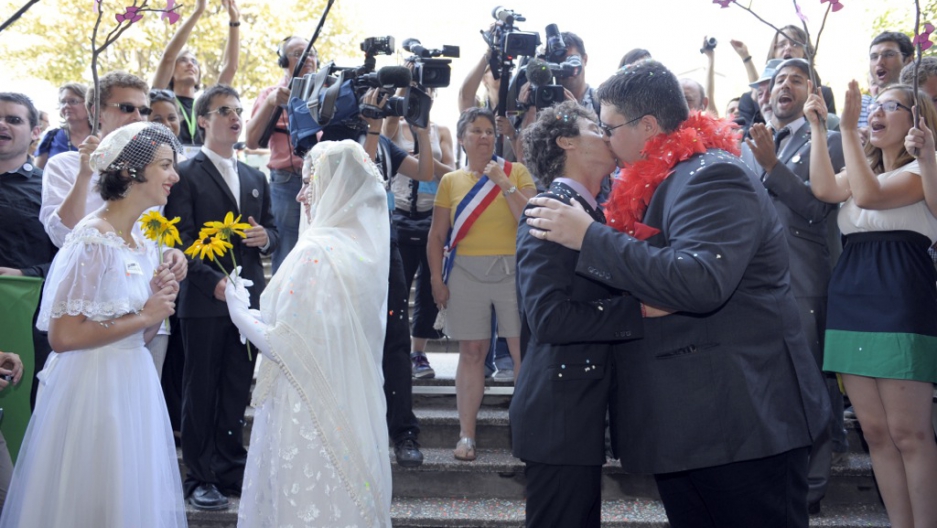 BRUSSELS, Belgium – Gay marriage emerged as an issue in France’s presidential elections on Friday with a claim by the newspaper Liberation that President Nicolas Sarkozy is poised to make a U-turn and embrace the idea of same-sex unions.

To emphasize its point, the left-leading daily accompanied its scoop with cartoon taking up much of it’s front-page that showed the president slipping a ring onto the finger of a hairy chested Village People look-alike wearing little but a leather cap, boots and a g-string.

A government spokeswoman denied Sarkozy had changed his position. Valerie Pecresse told French media that the president remained “opposed to the opening of marriage to homosexual couples.”

However the paper stood by its story, stating that even if the president’s plan would stop short of campaigning for full marriage for gays, he would campaign in favor of civil unions conducted in French city halls that would give same-sex couples equal rights in terms of taxation, succession and property ownership.

With 100 days to go before the presidential election, the paper claimed Sarkozy is seeking to take advantage of a perceived swing to the right by gay voters as one-time militant campaigners for equal rights grow older, more prosperous and more integrated in mainstream French society.

Concern over anti-homosexual sentiment among France’s sizeable Muslim community is also believed to have engendered gay support for right-wing parties seeking a tougher line on immigration.

Left-wing commentators however recalled that Sarkozy had also flirted with support for civil unions during the last presidential campaign in 2007 only to drop the idea after he was elected amid opposition from conservatives in his Union for a Popular Movement party.

“Homosexuals will not be fooled by this … a gay who votes for the right is like a turkey voting for Christmas,” said gay rights campaigner Jean-Luc Romero, a former senior member of Sarkozy’s party who defected to the opposition socialists in 2009.

Whatever position Sarkozy eventually adopts, Liberation’s story has ignited a debate on the issue. Socialist candidate Francois Hollande restated his support or “the right to marriage, no matter who the couples are” referring to France’s constitutional values of liberty and equality.

Far-right candidate Marine Le Pen is vehemently opposed, playing on fears that French values are under threat from outsiders, she has argued that gay marriage could open the way to France being forced by certain “politico-religious groups” to also legalize polygamy.