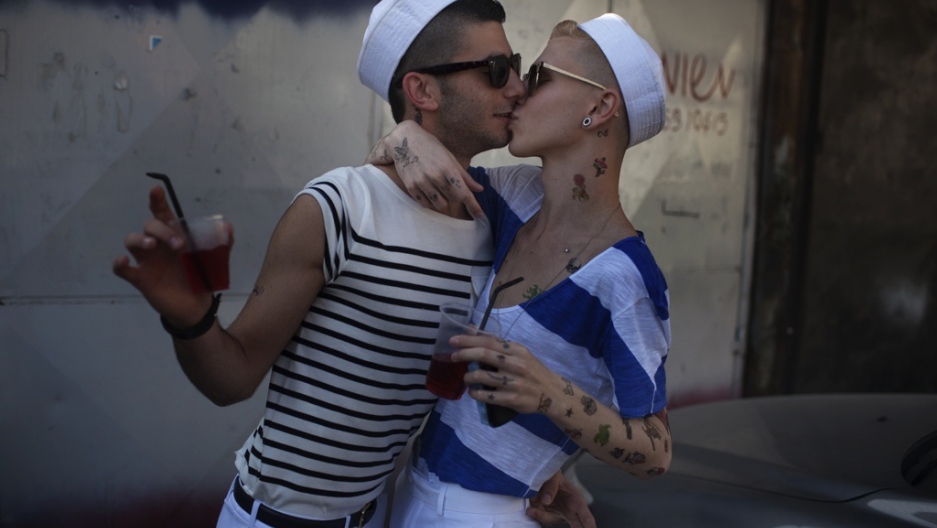 Tel Aviv has been name the best city for gays. Here Israelis and foreigners of the gay community enjoy a Purim party as they celebrate in the Israeli coastal city of Tel Aviv on March 19, 2011. Purim commemorates the salvation of the Jews from the ancient Persians as described in the book of Esther.
Credit: Menahem Kahana
Share

Tel Aviv, the fun-loving, beach-combing financial center of Israel, which celebrated its 100th birthday last year, was voted Best of Gay Cities 2011 in a survey sponsored by American Airlines.

Grinning like a Cheshire cat, Tel Aviv’s Mayor, Ron Hulda’i embraced the news, which received major play in Israeli media, by proclaiming his city “a free place, free for everybody, welcoming to everybody.”

It is his second trip to Israel. The first, nine years ago, was a charter flight to the Red Sea resport of Eilat, and he saw very little of the rest of the country.

Would he recommend the eastern Mediterranean port destination to other friends?

“Absolutely. But I wouldn’t say that I’d recommend it just to gay friends. Actually, I would never recommend a place to go just for its ‘gayness.’” said Andersen. “Also, I’d also recommend they go in Jerusalem, but maybe not to be just as outgoing. You can feel the religiousness and uptightness.”

Sounding as if he was on Hulda’i’s staff, Andersen added “I felt so relaxed when we got back to got back to Tel Aviv. I loved the restaurants, I loved the place, the people …”

Assaf Baker, a 28-year-old native Jerusalemite now living in Tel Aviv and working as a pastry chef was thrilled by the announcement, more for patriotic than touristic reasons.

“I’m absolutely pleased by this! I think it is very important for international image of Israel," said Baker. "I think it really matters that we are seen not as a war-torn country like many people abroad think when they think of us, but that we are advanced and liberal in areas that people might least expect.

"In addition to the image of us as a religious place and of the Israeli-Arab conflict, I’m glad we are known as an open and open-minded place when it comes to something as important as gay rights.”