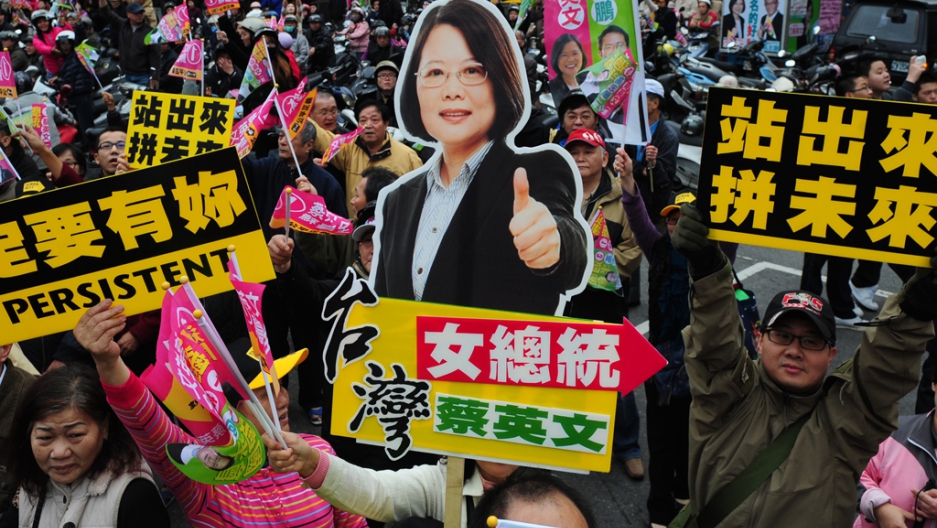 TAIPEI, Taiwan — The Chinese speaking world's most vibrant democracy goes to the polls Saturday for a hotly contested presidential race that analysts predict will be won on the back of Taiwan's economic performance and not the sexier question of formal independence from China.

“Close to 90 percent of Taiwanese wish to retain the status quo. We feel that we are already independent from China and pushing for the international community to recognize us would cause too many problems,” said Chang Mei-yu, a China-based businessman, who was one of 300,000 expats returning home for the fifth presidential election since free elections were first held on this diplomatically isolated island off China's southern coast in 1996.

But this one is likely to be closer than most.

According to the latest polls released a few weeks ago, incumbent nationalist Kuomintang (KMT) President Ma Ying-jou holds a slight lead of a few points over chief rival Tsai Ing-wen, a 55-year-old London School of Economics educated technocrat, who is the first female to seek top office in the Chinese speaking world and is chairwoman of the independence-leaning Democratic Progressive Party.

Taiwan's electoral laws do not permit polling information to be released two weeks prior to an election.

While former president Chen is now serving a lengthy prison term for corruption, Ma's supporters are concerned that Soong will siphon off enough KMT votes to yet again hand the DPP the keys to Taipei's Presidential Palace.

“It's too close to call right now. Ma will carry the traditional KMT strongholds of Taipei and the north of the country, while Tsai will, as usual, take the south. This one will be won on the fringes. The youth vote or a late swing in somewhere like New Taipei City could spell the difference,” said Yeh-lih Wang, chair of political science at National Taiwan University.

But what is certain, pundits say, is that the economy and social issues are driving this election more than the headline grabbing topics of Taiwan-US and China relations, which it split from following civil war in 1949. Beijing still regards Taiwan as a renegade province and has said it will use force if necessary to bring it back into the fold.

While Beijing-friendly Ma's stewardship of an export-driven economy in the midst of a global recession are impressive on paper — GDP grew about 10.9 percent in 2010 and foreign investment surged during his watch — Tsai claims that a raft of new financial agreements with China in investment, tourism and transportation have aided the rich and done little for the middle class and the poor.

“This idea that Taiwan is financially benefiting from closer ties to Beijing is somewhat of a misnomer and one that is driven largely by people like you [journalists]. The reality is that Taiwan and Taiwanese businesses pump much more into China's economy than they pump into ours. It isn't even close. We are the biggest foreign investor in China, and they don't even crack our top ten,” said Wu Tien-dong, a Taiwanese businessman who runs an electronics manufacturer in one of China's booming second-tier cities.

More from GlobalPost: Is Taiwan's economy no longer superior to China's?

Wu was referring to a landmark June 2010 free trade agreement (FTA) between Taipei and Beijing that the Ma administration ushered in to great fanfare. However, the Tsai camp has been quick to lambast the FTA as an example of an out-of-touch party keen on bartering away political leverage for the sake of the haves over the have-nots.

While property prices in Taiwan's urban areas have skyrocketed and real wages are languishing at 13-year lows, Ma has cautioned that the FTA will take time before the economic benefits trickle down to the middle class.

And he could have a point. For all the political hand-wringing over cozier ties with Beijing, the reality is that without a FTA in place with its antagonist across the Taiwan Strait, Taipei found it impossible to draw up similar agreements with other countries in the Asia-Pacific as China's growing economic and political dominance in the region left other trading partners wary of offending the nascent superpower.

The Ma administration points to deals on the drawing board with Singapore and New Zealand, among others, as evidence that his economic policies will take time before bearing fruit.

“Ma's banking on the electorate showing some patience and giving him another four years. But he's never faced a challenger as competent as Tsai or a race ran as professionally as hers. I'm voting for him because I do business in China and Beijing hates the DPP. But I can understand why it could go the other way though,” said Chang Ming-tsu, a Taipei resident who runs a successful interior design firm in Shanghai.