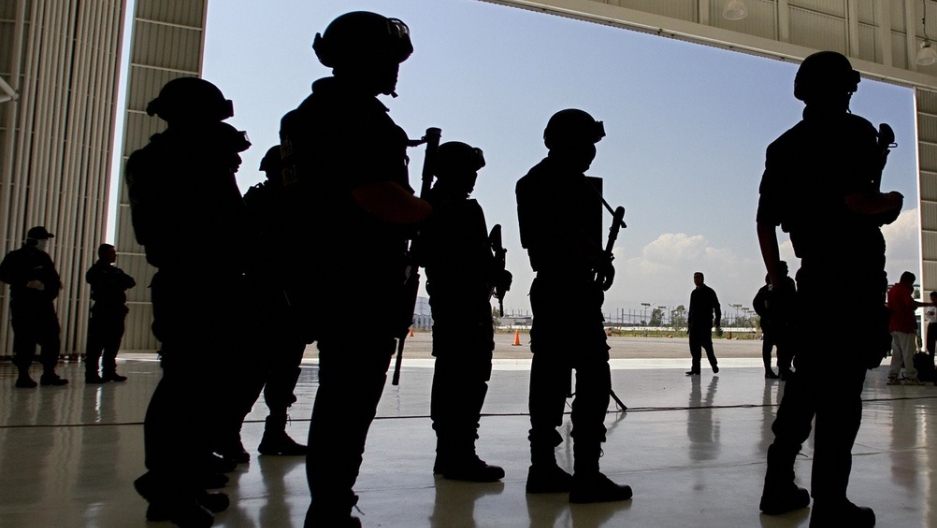 MEXICO CITY, Mexico — Residents of the town of Fresnillo in northeast Mexico cowered in their homes as gunfire rattled between federal police and cartel gunmen on the streets outside.

When the shooting subsided, those brave enough to peer out their doors saw the corpses of nine gunmen sprawled on the concrete.

Police officers said the deaths — which happened Wednesday — were the latest blow against Los Zetas, a psychopath criminal army battling for control of Mexico’s drug trade, and responsible for multiple kidnappings, oil theft and other rackets.

Read more: Who are the Zeta killers?

Many in Mexico’s federal police and army consider the Zetas to be the biggest problem in the drug war. They have launched a sustained campaign against them, resulting in hundreds of deaths like those in Fresnillo and thousands of arrests in recent months.

Rival cartels have also attacked the Zetas across the country, piling corpses of alleged members on the streets — such as 35 who were dumped in Veracruz state — and massacring them in prisons.

But despite the onslaught from all sides, the Zetas keep coming back, recruiting more troops and fighting to dominate trafficking from the Texas border deep into Central America.

A Jan. 1 report by Mexico’s Specialized Organized Crime Unit, known by the Spanish acronym SIEDO, found the Zetas now dominate the most territory in Mexico — overtaking the Sinaloa Cartel, the oldest criminal group in the country.

“This criminal organization has become the biggest risk for internal security,” said Defense Secretary Guillermo Galvan, “because of the impact of their actions against government institutions and the complete disregard for human life.”

Agents say the Zetas’ ability to find a steady stream of new recruits, including many former Mexican police and soldiers, has allowed them to their replace their losses.

Their extreme violence has also helped them to expand and control territories through old-fashioned intimidation.

The Zetas are alleged to have committed the most horrifying atrocities in the drug war, including the burning of a casino that led to 52 deaths, the massacre of 72 migrants, and two mass graves, each with more than 200 corpses.

They are also alleged to be behind the fatal shooting of US immigration agent Jaime Zapata in Mexico last year.

In a December communiqué purportedly signed by the Zetas’ second in command, Miguel Trevino, the group openly challenged attacks from the Mexican and US governments.

"Not the Army, not the Marines nor the security and anti-drug agencies of the United States government can resist us. Mexico lives and will continue under the regime of Los Zetas.”

The Zetas were originally formed in the late 1990s by deserters from the Mexican special forces who were hired as enforcers for the Gulf Cartel.

They expanded rapidly, hiring many former police officers, soldiers and street thugs into their ranks. To attract recruits, they even put up job advertisements on blankets and hung them from bridges.

“The Zetas operations group wants you, soldier or ex-soldier,” one banner said. “We offer you a good salary, food and attention for your family. Don’t suffer hunger and abuse any more.”

In 2010, the Zetas then fractured from their masters in the Gulf Cartel to fight for control of the northeast of Mexico, turning the region into a brutal battleground.

The area, which shares a border with the East Texas cities of Laredo, McAllen and Brownsville, is one of the most sought-after trafficking corridors. From there, drugs can be transported through Texas to the American South and Eastern seaboard.

The Zetas also have a strong presence along the whole Gulf of Mexico and in cities along the Caribbean coast down to the Belize border.

Over in Guatemala, the Zetas are alleged to be behind a series of massacres that provoked the Guatemalan government to declare a state of emergency and send in military special forces to the region that borders Mexico.

“We won’t go until you pay your debt,” the message. “We helped you, and you stabbed us in the back. The bill is due.”

As well as trafficking drugs, the Zetas have expanded aggressively into other businesses from protection rackets to product piracy.

Pemex is estimated to lose more than $2 billion worth of oil each year to theft.

President Felipe Calderon has waged a national offensive against drug cartels since he took power in December 2006.

However, the arrest and killing of gangsters has only led to the rise of more violent groups like the Zetas, leading many to question the entire war on drugs.

“We are seeing evidence of an official failure of the anti-drug fight with the expansion of the most worrying cartel of all,” wrote Mexican columnist Jorge Alejandro Medellin. “The anti-crime model is showing the rottenness of its structure.”