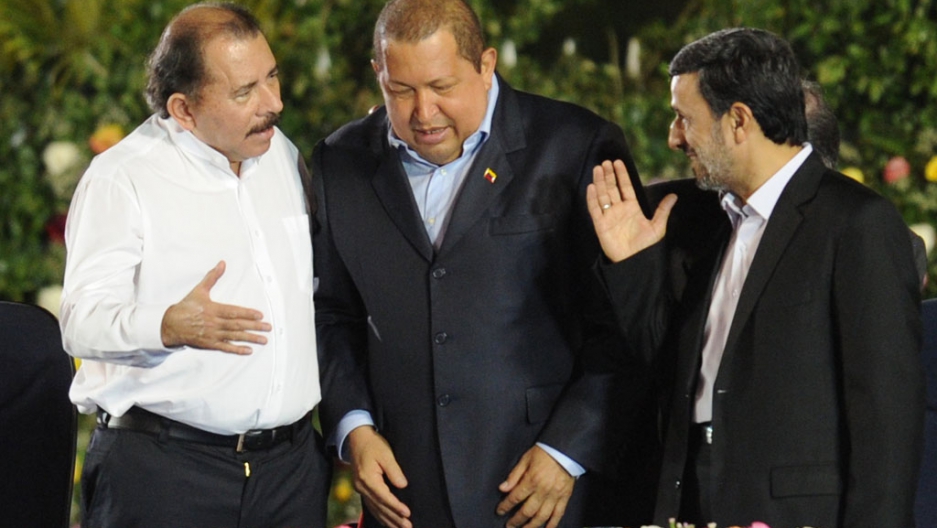 Iranian President Mahmoud Ahmadinejad has finished up his tour of Latin America, as tensions between his country and Washington are on the up.

The US imposed its toughest sanctions yet on Iran on New Year’s Eve before Iran sentenced a former US Marine to death for alleged spying as well as threatened to close the strategically important Strait of Hormuz, the choke point for a fifth of the world’s oil.

To add fuel to the already considerable fire, Ahmadinejad spent the week with some of Washington’s greatest adversaries across Latin America.

Kicking off in Venezuela on Sunday, he joked with President Hugo Chavez about having an atomic bomb. “That hill,” said Chavez, pointing at the grassy mound in front of his Miraflores palace, “will open up and a big atomic bomb will come out.” The pair laughed, as Chavez continued: “Ahmadinejad and I are going into the Miraflores basement now to set our sights on Washington and launch cannons and missiles.”

Venezuela’s state oil company PDVSA was hit with sanctions last year in response to its ties with Iran. Venezuelan Oil Minister Rafael Ramirez was quick to respond: “We’ll sell oil to whoever we want to. We don’t need money from gringos… The imperialists can go to hell.”

In Cuba, Ahmadinejad met with former President Fidel Castro and his brother and incumbent Raul Castro. During their two hours together, one of the main themes of discussion was a hypothetical nuclear war with Iran pitted against US and Israel.

The Iranian leader also took in Nicaragua and Ecuador, where he finished up yesterday. Brazil was notably absent despite a visit during the previous government of Brazil’s then President Luiz Inacio Lula da Silva.

Despite ample opportunity, there was little discussion of the important topics, least of all any direct responses to Washington’s sanctions. “The four countries are united with Iran primarily in their antipathy toward the United States,” wrote Jeff Franks of Reuters.