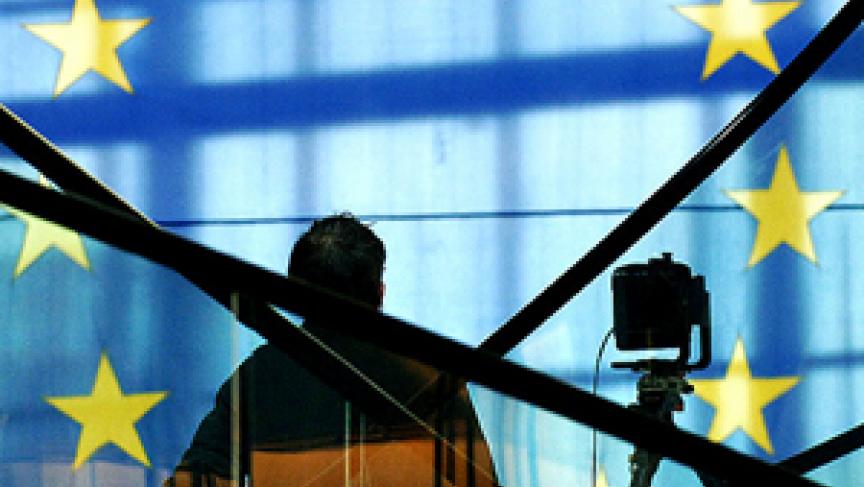 Share
In the US, all eyes have turned to South Carolina. That's the next primary stop for the Republican presidential hopefuls, on January 21st. Who's up and who's down isn't just news here, though. Many in Europe are following events closely, and some there don't like the Europe-bashing that they've been are hearing from the candidates. During his victory speech on Tuesday night following the New Hampshire primary, Mitt Romney attacked what he called President Obama's wish to "fundamentally transform America" – much to the delight of the assembled crowd. "He wants to turn America into a European style social welfare state. We want to ensure that we remain a free and prosperous land of opportunity. This president takes his cues and inspirations from the capitals of Europe. We look to the cities and towns across America for our inspiration," Romney said to vigorous applause. Romney may have been surprised to know that there was a Dutchman in the crowd, and he wasn't delighted by what he heard. Willem Post, an expert on US politics at the Clingendael Institute for International Relations in the Netherlands, was in New Hampshire to get a read on the candidates. In the days before that speech, Post said he got a chance to speak with Romney for a couple of minutes. "I asked him, 'Do you know the Netherlands? Do you know Europe?' And he said, yes, I've been many times in your country as well. And he said about the Netherlands, I love speed skating. I thought – Okay, this is a guy who knows Europe well," Post said. "Then I was there when he gave his speech, and he was saying, Mr. Obama is too cozy with Europe, with socialist Europe." Post thought to himself, "Really?" The Europe that now has quite a few countries, including the Netherlands, run by centrist and center-right governments? The Europe that's wrestling with its budgets, and as often as not is trying to solve its problems with privatization? Post said he thought, "Mr. Romney, come on. You almost owe us an apology. It's really nonsense." Mitt Romney's not the only Republican taking shots. Newt Gingrich recently took a turn on Fox News, speaking about President Obama. "He is in exactly the tradition of the French socialist, or the Italian socialist, or the German socialist. This is somebody who really does believe that if you're in private enterprise, and you go out and you work hard, you're somehow doing bad things," Gingrich said. Many a European socialist might be shocked to learn that Obama is one of them, according to some European analysts. But let's face it – Europe's financial sector is in big trouble right now, and its leaders can't seem to fix it. Still, there's some irony in the current attacks, said Rosemary Hollis of City University in London. "There's this attempt to taint Obama by association with the Europeans at a time when the Europeans are getting a very bad press for having failed in terms of their economic models, but it's liberal, capitalist economic models that have essentially nose-dived," Hollis said. Hollis follows transatlantic issues closely, especially as they relate to the Middle East, and she notes that Europe bashing has become a leitmotif in American politics over the past decade. Remember the call to rename French fries "Freedom" fries in the run-up to the war in Iraq because France refused to support the invasion? Many Europeans, though, are taking these latest statements in stride. They know it's an election year, and the rhetoric can get nasty. But the tough rhetoric may be pointing toward a quiet, though fundamental shift in American thinking. Ian Lesser, who directs the transatlantic center of the German Marshall Fund in Brussels, said Europeans are probably less worried about social comparisons, and more concerned about whether the US will continue to pay attention to Europe. "The truth is that the real distraction at the moment is that the US is paying more attention, in foreign policy terms, in economic terms maybe even in cultural terms, to Asia," Lesser said. As for Mitt Romney, he might want to reconsider using the anti-Europe rhetoric too heavily. He spent two years in France in the late 1960s on his Mormon mission, and he learned French there. There's promotional video for the 2002 Salt Lake City Winter Games making the rounds now. And it includes Mitt Romney, who headed the Salt Lake Olympic Committee, speaking French to welcome volunteers. PACs and SuperPACS that support some Republicans and Democrats are already using that in anti-Romney advertisements.