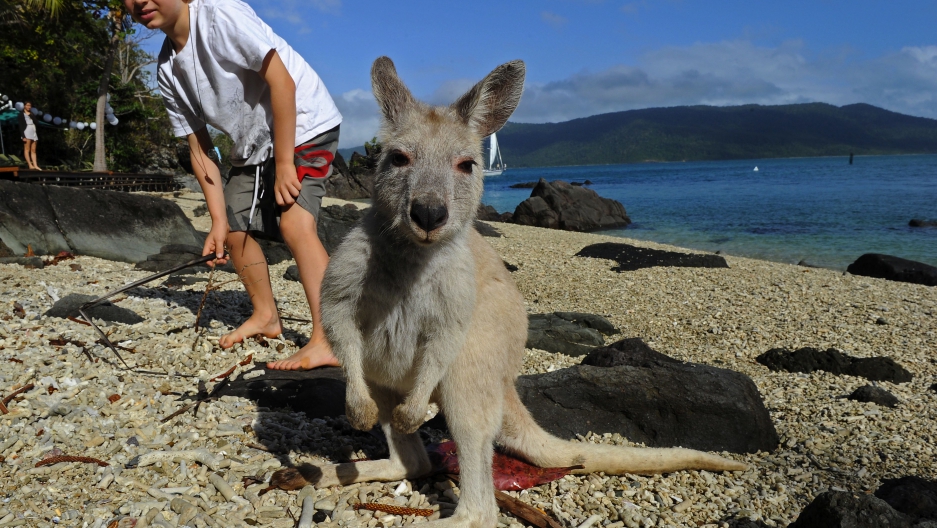 The face of a killer? A rare albino kangaroo at Lovers' Cove on Daydream Island in the Whitsundays archipelago off Queensland.
Credit: Torsten Blackwood
Share

The Associated Press is reporting the melancholy tale of a woman in Broken Arrow, Oklahoma, who keeps a partially paralyzed kangaroo as a therapy pet and who says that she must moving to another city for fear local officials will seize the animal.

Okay, all good so far.

Now according to the AP, Christie Carr, who suffers from depression, planned to take Irwin to McAlester to stay with her parents because she could "no longer trust" city officials.

However — and here's where the story loses a little traction — a spokeswoman for the town of Broken Arrow, Stephanie Higgins, reportedly said no threats were made to seize the animal.

So why all the fuss?

It appears Carr failed to turn in the proper paperwork that would have allowed her to keep Irwin.

Higgins again: "She was given a draft proposal of the application last year, and she is saying she has not received anything. We have documented that we sent her the application."

Oh dear. Someone's not being straight with the AP's hardworking Tulsa correspondent Justin Juozapavicius, out on the keeping-kangaroos-as-pets-in-America beat.

But let's go back.

Carr, who is unable to work because of her health, "met" Irwin while volunteering at a local animal sanctuary on the advice of her therapist.

Irwin had run into a fence (as kangaroos often do, in the wild at least), fracturing his neck and suffering brain damage that left him unable to stand or walk on his own, "although he can hop with assistance."

She changes his nappy several times a day, feeds him salad, raw vegetables and popcorn and dresses him up each time he leaves the house.

The clothes — a little boy's shirt cut and sewed to accommodate his neck, sometimes a tie, and jeans or slacks with a hole cut for the tail - are necessary for therapeutic reasons and to protect him against germs, she said.

Moving on to some points the AP article didn't bring up, but Australia's Kangaroo Protection Coalition helpfully does:

Okay, that last point was actually from the Kangaroo Industry Association of Australia, but quite valid — cooked right, kanga steaks, sausages and burgers have enough appeal to be sold on regular supermarket shelves here.

Either way, kangaroos and suburban America sure sounds like a worrying combination.

Initial fears that Irwin would become too big for the town of Broken Arrow — "healthy male great red kangaroos can grow up to 7 feet tall, weigh more than 200 pounds and bound 25 feet in a single leap" — were allayed by veterinarians.

They said due to his injuries, and a certain surgical procedure that red-blooded male kangaroos don't like to talk about, Irwin would probably not grow larger than 50 pounds.

Besides, "Carr's therapist had certified the animal as a therapy pet under the Americans with Disabilities Act."

If you ask Down Under's opinion, Carr, her therapist and the good folk or Broken Arrow are all hopping mad, and we don't mean in a good way.