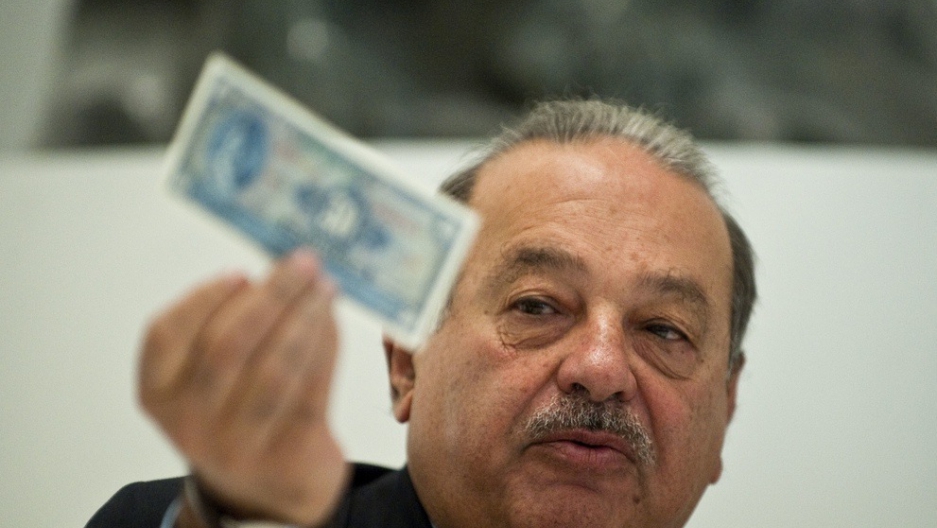 Mexico billionaire Carlos Slim, the biggest 'have' of them all.
Credit: RONALDO SCHEMIDT
Share

The video of a wealthy Mexican man beating an employee for not doing what he wanted has reignited debate over the wealth gap in Latin America's second-biggest economy.

The video, recorded from a surveillance camera in July last year, appears to show the man, Miguel Sacal, beating a doorman at his apartment building. (Watch for yourself below.)

According to the Associated Press, Sacal asked the doorman to get a jack for his car, but the man refused, saying that he was on desk duty and couldn’t leave his post. In the video, Sacal walks to the other side of the desk and starts hitting the man.

Hugo Enrique Vega, who identified himself to local media as the victim of the beating, said he felt powerless and took the beating because he was afraid of losing his job. But he said he later filed a crime report against Sacal.

But that’s not the only thing that’s made people angry.

Prosecutors said Sacal had obtained a court injunction against arrest, a tactic frequently used by wealthy people in Mexico to avoid jail, but was still formally on trial though he was not in jail.

See the video for yourself here:

On Wednesday, Sacal apologized for the incident and said he'd pay for the damage, which included Vaga's broken teeth.

So much attention is paid to Brazil’s economy that Mexico’s, by far the second-largest in the region, is often overlooked. And, like other interconnected economies, Mexico has taken a hit as demand for goods from the US has slowed. But that is picking up; growth is set to rebound to 3.6 percent this year, according to the International Monetary Fund. Not overwhelming, but it’s growth.

But as Mexico has expanded, so has the gap between rich and poor.

The World Bank tracks income inequality through its Gini index, which places countries on a scale of zero, or perfect equality, to 100, which represents complete inequality.

Read more: Extortion on the rise

As these economies expand, the wealth gap threatens to become a flashpoint. It’s simply the way people work: nobody really complains if they feel like everyone has it bad. As soon as a country enters a boom phase, people start to see others get rich and improve their lives. As that wealth gap widens, so does the discontent — and the possibility of revolution, or at least rebellion.

It’s happened in conflict in Africa, and it has played out in the Occupy Wall Street Movement in the US, and even to some extent the Arab Spring. There’s a reason Saudi Arabia and Jordan quickly announced economic reforms last year amid the turmoil.

It’s a lot harder to complain about your government when you feel like you're doing all right.

In Mexico, there have been a few recent flashpoints between the haves and have-nots.

in December, Pena Nieto, who’s running for president, forgot what his favorite books were during a visit to a book fair. Pundits ripped him for the gaffe, of course. But later, his daughter retweeted a comment from her boyfriend that wasn't very nice. In English, it means something like, "Greetings to all those idiots, who make up part of the proletariat and only criticize what they envy."

Nieto, and his daughter, later apologized.

Then a few months before that, two wealthy Mexican women were videotaped beating and insulting a traffic cop.