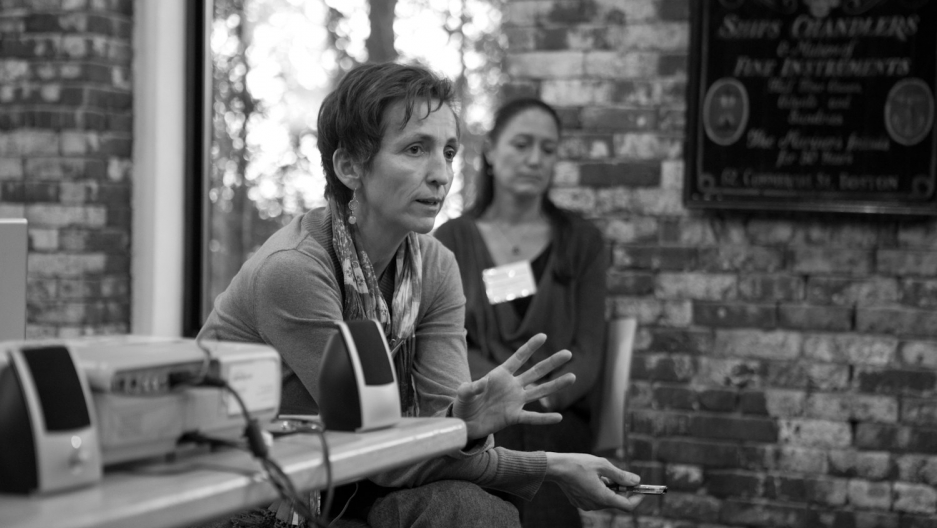 Kristen Ashburn began photographing the impact of AIDS on Southern Africa in 2001, thinking, “this is the story of our time.” There was no way, she said, that she was going to miss being a part of that.

Ashburn, whose work has appeared in The New Yorker and Life magazines, saved up to fund multiple trips to Botswana, Zimbabwe and South Africa over the next few years. She received a 2007 Emmy Award nomination for “Bloodline: AIDS and Family,” which combines haunting still images with audio interviews, and worked with Madonna on a documentary about the millions of Malawian street orphans who have lost relatives to AIDS. “I Am Because We Are,” a book based on the film, was published in 2008. But despite the celebrity-status of the project, Ashburn said funding has “always been an issue.”

“At some point, you just can’t do it any longer. I have bills,” she told global health journalists at a GlobalPost and Nieman Foundation for Journalism at Harvard seminar in Boston in December. The journalists discussed the challenges in telling compelling global health stories in the digital age.

“I’ve had successes over the years,” Ashburn said. “But it’s been very difficult.”

Taken alone, her images are striking, but coupled with the halting voices of her subjects they impress the full extent of this tragedy:

“HIV doesn’t care whether you’re educated or not,” a Zimbabwean teacher says while images of he and his family flit across the screen. “It is my hope that some day people will hear us and come to our aid.”

Despite the reach of the project, Ashburn said she gives it away “essentially for free.” Even not-for-profit organizations who love the work and want to use it say they can’t pay.

“I have the ability as a reporter with the talent, will, desire and sacrifice” Ashburn said. “But I still can’t do it.”

Many of these issues journalists are grappling with today, including how to communicate to a scattered, distracted audience and how to secure proper compensation for work aren’t new, said prize-winning photographer John Stanmeyer.

Stanmeyer, who began his career at the Tampa Tribune and whose work has appeared in Time and National Geographic, launched VII, a cooperative photo agency focused on conflict photography, for precisely that reason: to give photographers more ownership in and control over their work.

More from GlobalPost: Better reporting from the frontlines of global health

He encouraged writers to do the same, “get together to leverage your power,” he said. “So you can push for better rates, so you can collaborate to do better projects and use it as a hub of distribution.”

“I want to move forward to what we can do,” Stanmeyer said. “Not what we can’t.”

Stanmeyer’s photographs are renowned for their powerful depictions of human suffering, particularly his work on the spread of HIV through Southeastern Asia. He and his wife, a reporter, wanted to examine the influence of the virus on this region while most of the world’s attention was focused on Africa.

“I was interested in what gets it from Timor to Thailand,” he said.

The result: a 300-picture book of disturbing, beautiful, heart-breaking, and tragicomic images documenting the swath of HIV-infected life in Southeastern Asia: railroad sex workers in Jakarta buying hand-me-down clothes; women in Thai “fishbowls,” their numbers stuck to their blouses as they stand imprisoned behind windowpanes; Christian cemetery sex workers in Indonesia (The tombs are flat, “so they can have sex on what is essentially a bed.”).

Over and over, images tumble forth: a woman in remote Burma with a sparkling aluminium roof. Her daughter sought success beneath the bright lights of Thailand, earning enough to send home at the expense of contracting HIV. Children, too young to understand, play with their dead mothers’ coffins. Families, too poor to bury loved ones deep underground, find the remains strewn about the cemetery by stray dogs.

Publishers, however, “didn’t want to touch it, because it’s too heavy for them,” Stanmeyer said. Though able to sell photographs, the book was published as an educational tool, with VII retaining full control.

How to fund compelling global health reporting projects is increasingly difficult, journalists said. Newspapers and magazines have scaled back on foreign reporting and are struggling with tight budgets, often paying as little as $250 a story, nevermind reporting expenses. Foundations like Bill & Melinda Gates and John S. & James L. Knight have money and interest but tend to donate only to established organizations, especially ones with which they already have a relationship. Non-profits have resources and funds but are often pushing their own agenda.

It also costs money to give money away, said Penny Duckham, director of the Kaiser Foundation Media Fellowship Program, which partnered with GlobalPost to fund “Healing the World,” a series investigating President Barack Obama’s Global Health Initiative. Duckham said the Gates Foundation typically doesn’t give less than $1 million because auditing costs can be about a quarter of that. That’s another incentive for journalists to partner with organizations or form cooperatives for grants, she said.

More from GlobalPost: Global health a ‘window’ into addressing spectrum of challenges

The Pulitzer Center for Crisis Reporting funds many foreign reporting projects and Nathalie Applewhite, its managing director, said they are “constantly thinking about every possible way we can keep these stories out there and keep these issues alive.”

She encouraged journalists to work “across the platform.” Print reporters should take pictures and gather audio because “then we’re able to distribute it to a greater audience.”

“I’m not a believer that every journalist is a one-man-band and can do everything well,” Applewhite said. “Everyone has their skill and should focus on that,” but working across different platforms or partnering with those who can “takes the work so much further.”

Partnering is “key,” said Charlie Sennott, executive editor at GlobalPost. Journalists are living in a time “to take risks, to do things we haven’t thought of doing before.”

“Everyone here cares about the issues and about story telling,” he said. “The Middle Ages of journalism have collapsed and now we’re in the Romantic period when we put on suits and go slay some dragons.”

Go forth, he said.