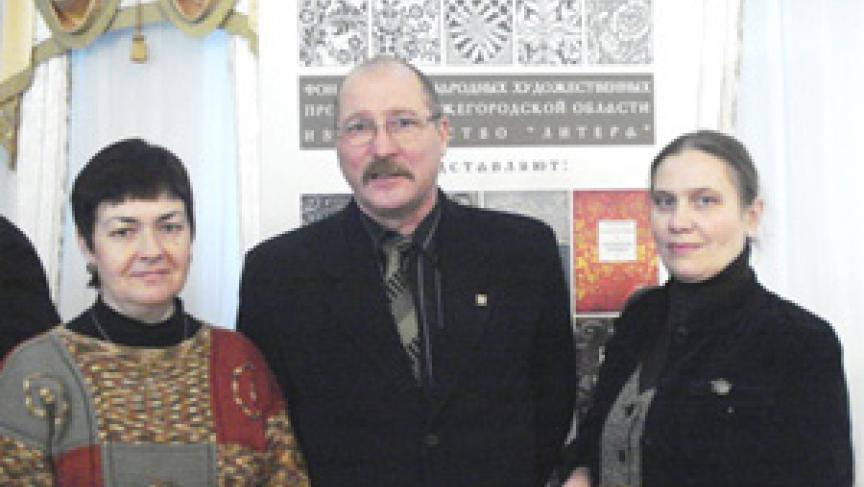 Larisa Bukarina, Nikolay Nikolayev, and Elena Konstantinova are all ex-Soviets working together in Russia. Sometimes they long for the economic policies of the Soviet Union. (Photo from master-raduga.nnov.ru.)

When the Soviet Union broke apart 20 years ago, the biggest shock for Russians and other ex-Soviets was what came after.

Communism was out. Capitalism was in and with it free market prices.

“Did they really want a market economy where prices and money determined things? I’m not so sure,” said James Collins, former US Ambassador to the Russia Federation. “It was a terribly wrenching experience, because it essentially upended the entire system by which everybody had structured a life — everything from the fact that money counted, to the idea that an academic would make less than some fellow selling Snickers bars in a corner kiosk. I mean this was just incredible."

Many people simply couldn’t make the transition, said Valery Solovei, a professor at the Moscow State Institute for International Relations.

Another university professor, Nikolay Nikolayev taught in Nizhniy Novgorod, a Russian city 250 miles east of Moscow. After the collapse of communism, he drove a taxi at night so his family wouldn’t go hungry.

“I remember meeting with my friends every New Year’s, and our first toast was, ‘Well, it can’t get any worse!’ And it kept getting worse,” Nikolayev said. “We just couldn’t believe how much things could fall apart, and how poor people were.”

Nikolayev said things are better now. He and several colleagues left the university in the mid 1990s to form a small publishing firm. Their office is in a beautiful old building in downtown Nizhniy Novgorod.

Lena Konstantinova, who works there as a graphic designer, said people have learned to survive by working as hard as they must to survive.

“Look at us,” she said. “We’re obviously fine, we’re sitting here in this nice office. But the underlying chaos and uncertainty hasn’t really disappeared. We’ve just gotten used to it.”

Konstantinova said one of the most bewildering changes since the end of communism is having to think about money so much.

“It makes life much narrower, much poorer, and less interesting, because everything is measured by how much it costs, or whether you can afford it," she said. "It’s very sad actually.”

Konstantinova said one of the most positive aspects of the Soviet Union was that you almost never thought about money when you considered love, work, or anything else.

“You were just running with the wrong crowd back then," he said to his graphic designer. "There was always a group of people who cared about money or whose car was better.”

Konstantinova agreed to a point — they were a minority. She also thinks because consumer goods were so scarce in Soviet times, people were satisfied with a lot less.

“If I managed, for instance, to buy this one really cool sweater and a pair of boots, I was really happy to wear them over and over, and I felt very fashionable.”

Larisa Bukarina, who works next to Lena, said because there wasn’t much in the stores to tempt them, they spent their money on concerts or theater tickets. It was all very cheap, though the shows sold out immediately.

“Now we have a lot more entertainment — foreign movies and performers — but many people can’t afford to go because it’s so much more expensive,” Bukarina said.

Same with travel. Konstantinova and Nikolayev say they’re grateful that Soviet-era travel restrictions have disappeared. But the end of communism has also meant the end of cheap travel within the former Soviet Union.

“Back then, totalitarian though it may have been, we could afford to take a river cruise on the Volga. Anybody could. It was very cheap. Now I can’t afford it, even though I have a good job,” Konstantinova said.

Nikolayev said he had a lot more time off back then to enjoy a holiday.

“I remember when we were young, even though we didn’t earn a lot, my wife and I could afford to spend a month in Crimea. Now, I can afford to go to Turkey, but the most I can take off is 10-12 days,” he said.

Nikolayev said he hasn’t had a vacation in more than five years. But he’s not complaining. Everything is just different now, he said.

Things are much more unpredictable – but in some ways, more interesting, too.