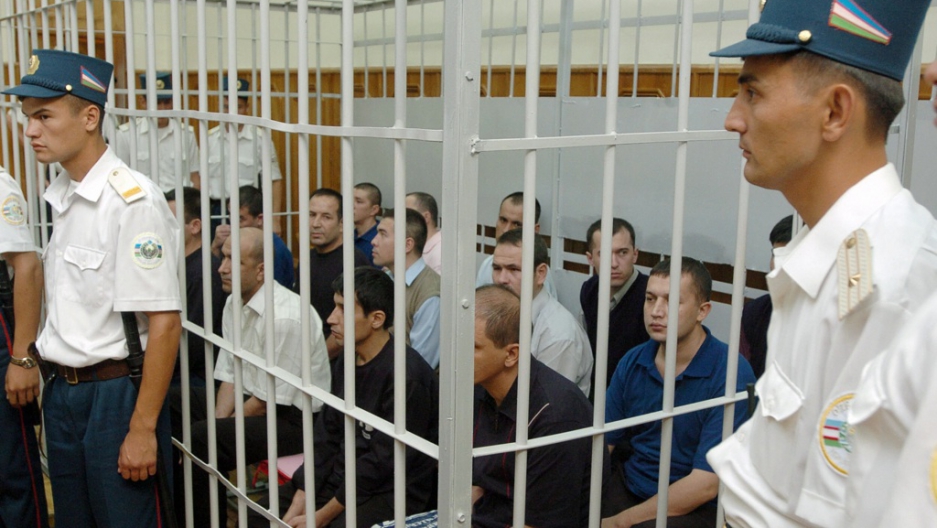 Defendants sit in the supreme court of Uzbekistan in Tashkent, 20 September 2005. Authorities portrayed the men as an Islamic insurgency, but critics say they were unarmed protestors.
Credit: STRINGER
Share

BERLIN, Germany — As the Arab Spring shows, it is never, ever, a good idea to go to bed with dictators.

The regimes of deposed strongmen like Egypt’s Mubarak and Tunisia’s Ben Ali enjoyed sponsorship from the US and Europe. Now that legacy haunts the West.

You would think lessons have been learned. Don’t be too optimistic. Uzbekistan’s brutal government, led by Islam Karimov, is thriving with dutiful patronage from both Russia and the West.

Strong Russian support stems from Moscow’s desire to keep Uzbekistan in its orbit, as a supposed bulwark of stability on its southern flank: because Karimov cracks down on independent Muslim groups, Uzbekistan appears to offer Russia a buffer against so-called Islamic extremism.

For the West, the sponsorship is even more tangible. NATO countries, including the US and Germany, service their war in Afghanistan from bases in Uzbekistan. In return, they hold their tongues while Karimov’s regime engages in rampant torture. Political prisoners can only dream of a fair trial, and the independent legal profession has been abolished.

But don’t expect any pressure from NATO countries over these abuses.

In the eastern city of Andijan in 2005, Uzbekistan massacred hundreds of mostly-peaceful demonstrators protesting the country’s grinding poverty and harsh, authoritarian political system. The Karimov government’s brutal use of force, and its refusal to allow an independent investigation, prompted the EU to enact sanctions. These were dropped in 2009, however.

Similarly, last September the US waived Congressional human rights restrictions on assistance, including on military aid. Germany, which spent some 26 million euros in 2010 to lease the Termez base in southern Uzbekistan, has declined to criticize the regime’s rights abuses.

Karimov has cleverly sold the fallacious argument that NATO can ask either for bases and border access, or for action on human rights. Consequently, Western governments have greeted Uzbekistan’s paper reforms and hollow “human rights commissioners” as “progress.”

But a new report by Human Rights Watch documents the reality that repression is just as bad as it was in 2005. Based on more than 100 interviews with victims, families, lawyers and witnesses in Uzbekistan between 2009 and 2011, our conclusion is clear: the Uzbek government is continuing its relentless crackdown on political activists, human rights defenders, independent Muslim groups, independent journalists and the independent legal profession.

In prisons and police centers across the country, detainees are tortured with electric shocks, strangulation, sexual abuse and severe beatings. Our report reveals at least one case in which authorities poured boiling water on a detainee, and there are constant, credible reports of suspicious deaths in custody.

This story is seldom told, because, as one of our sources said, “There is no one left to witness.” The Uzbek government kicked out most foreign non-governmental organizations (NGOs). It moved against independent lawyers. And now the West is turning away, too.

What should Brussels, Berlin, Moscow, Washington and others be doing?

They should stop pretending there is progress when, in reality, there is no change in the horrors taking place at the hands of a government they do business with on a regular basis. They should enact targeted punitive measures — such as asset freezes and travel bans — against senior security officials, prison authorities and others who have been identified as responsible for torture and arbitrary detention. They should bring Uzbekistan to the United Nations’ Human Rights Council, and initiate appointment of a special rapporteur to monitor the country’s rights record.

Above all, the Europeans, Americans and Russians should stop exchanging the services of a strategic ally in Central Asia for strategic silence about one of the most brutal regimes. They should immediately come down on the right side of human rights and international law.

What international leaders do now, or refrain from doing, will haunt them tomorrow. That has been the lesson of 2011.

Jan Egeland is the Europe Director and Steve Swerdlow is the Uzbekistan researcher at Human Rights Watch.